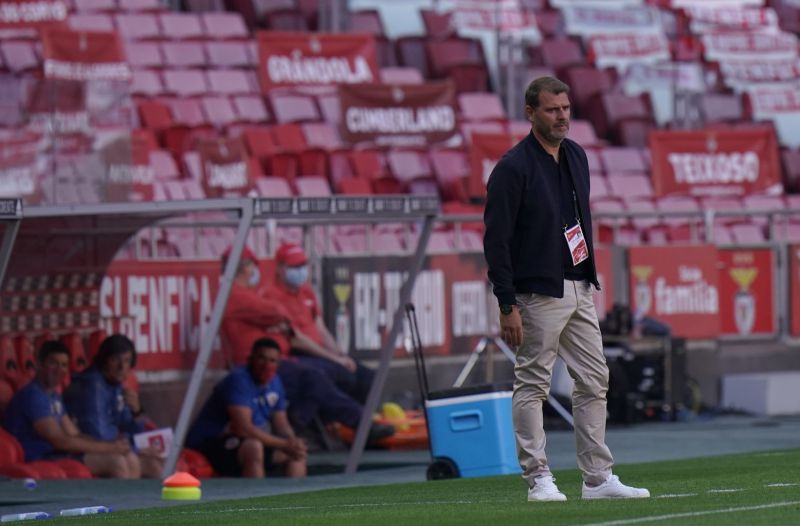 There was a local derby flavour to round 28 of this Liga NOS season as Braga overcame bitter rivals Vitória Guimarães in a 3-2 thriller while Sporting beat Belenenses in last night’s Lisbon duel.

The relegation battle heated up as Portimonense’s revival continued in a close match against fellow strugglers Marítimo, while Paços boosted their survival hopes with a third win in four matches.

The biggest story of the week though was the latest twist in the title race. In another derby encounter Porto thrashed Boavista to take advantage of a sensational win for Santa Clara at beleaguered Benfica. PortuGOAL Figure of the Week João Henriques coached his team superbly once again as the islanders’ excellent form continued.

47 year old João Henriques cut his managerial teeth in Portugal’s lower leagues before stepping up as senior manager of second tier Leixões in 2017. Some good work there caught Paços Ferreira’s eye early the following year, and although he was unable to save them from Liga NOS relegation come the end of the season Santa Clara were sufficiently convinced he was the right man to guide their own top flight experience following the team’s promotion that summer.

Since his appointment fans of the Azores side have seen their side comfortably tread top flight waters, impressively finishing just below the top half in 10th place last season upon their return to the big time. Just 4 wins from their opening 17 matches of this campaign however suggested they may be in trouble this time around but Henriques has since led the team to an impressive record of just 2 defeats in the last 11, featuring 6 victories.

Some tactical flexibility from the coach has been a contributing factor in this more recent success. The adoption of a 4-4-2 diamond has paid dividends whilst not fully deviating from the more traditional 4-3-3 variants he had previously employed.

In his squad Henriques has managed to utilise a blend of more experienced customers such as João Afonso and Anderson Carvalho, whilst not ignoring some of the up and coming talent, most notably Brazilian youngster Lincoln.

The Covid-19 pandemic disrupted many things but among them was Santa Clara’s positive momentum that had begun with an impressive win at Famalicão in late January. Despite this break and some daunting fixtures to face upon the resumption, the team have been just as impressive since restarting, defeating Braga in their first game back.

Even considering Benfica's own current troubles, there are scarcely bigger challenges in this division than a trip to Estádio da Luz so Tuesday’s fixture presented a real test of Henriques and his side’s mettle, and it would be one they would ultimately stunningly pass.

Too often visiting sides to Benfica adopt a defensive strategy that the current defending league champions more often than not tend to ultimately overcome but from the off Santa Clara looked to try and stick to their blueprint that has proved so effective in recent matches. Thiago Santana nearly provided the opening goal in the 13th minute only to be denied by Odysseas from close range.

Santa Clara withstood Benfica’s response with goalkeeper Marco Pereira in sharp form. The away side would then capitalise on a mistake from Benfica defender Nuno Tavares to take the lead just before half time, Anderson Carvalho the grateful beneficiary in slotting past Odysseas.

A second period improvement from Benfica felt inevitable and they drew level through Rafa Silva but the Eagles achieved parity for only seven minutes. Zaidu Sanusi, a player who is improving a lot of late, rose highest to nod in Osama Rashid’s corner.

Benfica unleashed Liga NOS top goalscorer Carlos Vinícius from the substitutes bench and his quickfire double turned the game the home team’s way, but Henriques too had something up his sleeve in his reserves, sending for what would prove to be a game-changing double substitution in response to going behind and bringing on forwards Cryzan and Zé Manuel.

Both made a significant impact, Cryzan confidently equalising from the penalty spot after a Rúben Dias handball with just eight minutes remaining. More drama was to follow as Santa Clara sensationally stole the three points in stoppage time.

The aforementioned super subs combined, both dispossessing Ferro, exchanging passes before Zé Manuel’s deflected shot flew past Odysseas to leave Benfica crestfallen, the Eagles conceding four goals on their own turf in the league for the first time in 22 years.

A stunning upset even in the context of Benfica’s well documented dreadful run of form, the triumph saw Santa Clara move up to an extremely impressive 8th place in Liga NOS.

European football is probably a pipe dream too far for this team this season but a top half finish and improvement upon last year’s in itself excellent finish would represent outstanding progress for both Santa Clara and Henriques, both of whom's reputations are continuing to grow.

Funnily enough I watched the first half of the Santa Clara game again just now and Benfica didn't do that bad. Seferovic missed a chance to give them the lead then the Santa Clara goal came from a mistake by Tavares but Benfica dominated. The...

Funnily enough I watched the first half of the Santa Clara game again just now and Benfica didn't do that bad. Seferovic missed a chance to give them the lead then the Santa Clara goal came from a mistake by Tavares but Benfica dominated. The second half was more chaotic and a mystery how it fell apart so quickly. They need more clinical finishing as the base for the team is still there. Pizzi was quiet though.