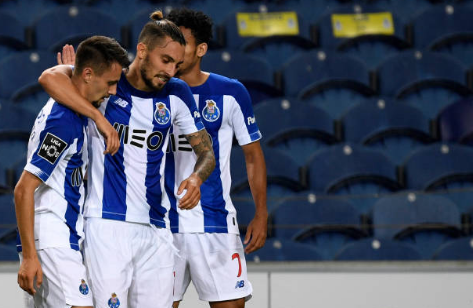 FC Porto are just two wins away from clinching the Primeira Liga title after dismantling Belenenses with a 5-0 score-line at home, replying to Benfica’s 3-1 win over Boavista in their first game since Bruno Lage’s resignation as manager.

With both title challengers at home this weekend, Benfica kicked off Nélson Veríssimo’s reign as the interim head coach with goals from André Almeida, Pizzi and Gabriel to apply pressure on Porto, momentarily trimming the Dragons’ lead to three points.

A big performance at home saw Sergio Conceição’s men rack up five goals at the Estádio do Dragão, however, restoring their six-point-advantage in style and edging the Blue & Whites closer to the title.

After a week filled with speculation surrounding Benfica’s next managerial move, the Luz staged Verissimo’s potential audition for the job, as Boavista came to town in hope of a further upset at the Eagles’ expense.

The Black Panthers would be the architects of their own demise, however, as Helton Leite’s slippery grip on the ball enabled André Almeida to crack the deadlock in the 13th minute before Pizzi doubled Benfica’s lead with his head.

Pizzi returned the favour to Gabriel in the 43rd minute, assisting the Brazilian midfielder for his steered effort into the bottom-left corner that upped the score to 3-0. Leite was the only thing that stood between Benfica and a fourth goal in the second period, as Haris Seferovic peppered the Boavista goal in search of joy.

Gustavo Dulanto pulled a goal back for Boavista eventually with a volley looping over Odisseas Vlachodimos but 3-1 is how the game would end, leaving Benfica praying for a helping hand from ex-player Petit and his Belenenses side in their travels to Porto.

Nine points was all that stood between Porto and the Primeira Liga title pre-kick-off, as they welcomed a 14th-placed Belenenses side desperate to pull themselves away from the relegation scrap in this latter stage of the season.

Tiquinho Soares provided the Dragons the push required to assert their dominance, claiming the crucial first and only goal of the opening half with his head in the 30th minute. Strike-partner Moussa Marega made it 2-0 in the 57th minute after being set free on Hervé Koffi’s goal by a precise through ball from Jesús Corona, getting the better of the Lille keeper one-on-one.

A 75th minute penalty from Alex Telles placed the game beyond Belenenses' reach, who’d return to cause danger after Porto’s third with a header aimed at Augustin Marchesin’s post.

Fabio Vieira left his mark on the game with his first professional goal in Porto colours, whipping in a low left-footed free-kick into the bottom corner before Luis Diaz, claimed the league leaders’ fifth of the night, scoring the pick of the bunch from range in the 92nd minute.