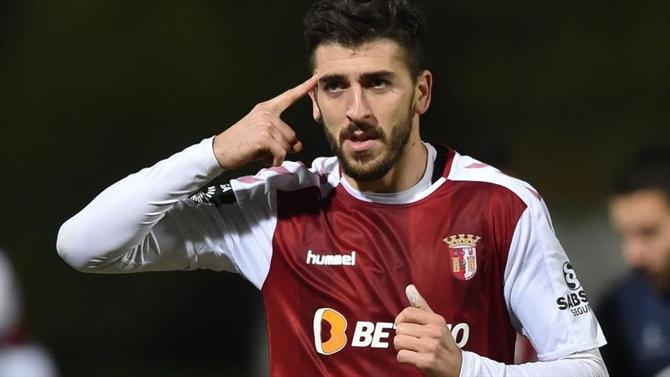 Liga NOS 2019/20 continues to hurtle towards the finishing line after another round of action across the week. Porto continued their march towards the league title with a resounding 5-0 win over Belenenses, although Benfica kept up the fight with a return to form in beating Boavista.

Aves’ relegation has already been confirmed but the fight to avoid joining them continues to be tight, Marítimo and Paços Ferreira gave their own survival hopes huge boosts with significant wins over Santa Clara and Vitória Setúbal respectively.

The battle for 3rd place continues also as Sporting dropped points in their quest for the position against Moreirense. 4th placed Braga took advantage in closing the gap with PortuGOAL Figure of the Week Paulinho instrumental in a crushing win at the Quarry.

João Paulo Dias Fernandes, a.k.a. 'Paulinho', is now in his third season with Braga having made the step up from Gil Vicente in 2017. He had Liga NOS experience with his previous side but the 27 year old represents a player that has risen to the increased challenge with his current team and has shown steady improvement year upon year.

The forward’s strengths lie in bringing others into play with his back to goal, but also in being in the right positions to finish off moves. His current season tally of 22 goals and 8 assists attributes to these facts, and also comfortably eclipses his totals from the campaign prior.

Paulinho, much like the rest of his team, has looked short of sharpness since the resumption of the season, reflected in results both collectively and individually. However the Minho side were closer to their attacking best in Saturday’s fixture against relegated Aves and Paulinho played a prominent role in a comfortable win.

Aves provided stubborn resistance in a goalless first half, Paulinho seeing an early attempt easily saved by Raphael Aflalo. The striker had the ball in the net midway through the period after tucking away Trincão’s rebounded shot but it was correctly struck off for offside.

Braga warmed up in the second half though and took the lead early in it as Rui Fonte headed home a Trincão corner.

The home side then doubled their advantage in the 54th minute thanks to a superb finish from Ricardo Horta. It was Paulinho who was the architect, his excellent run behind the defence was spotted by youngster Fabiano Silva, and the Portuguese forward cleverly turned before rolling off for Horta to sweetly strike in.

Paulinho got his second assist of the match with eight minutes remaining. Some good team buildup work involving Ricardo Horta and Pedro Amador saw the latter’s cutback find Paulinho in the box, who could have taken the shot on himself but instead cleverly backheeled to the onrushing substitute Abel Ruiz to slot in for 3-0.

A selfless performance from Paulinho was capped in stoppage time with a deserved goal of his own. A bit of a scruffy one, but he was in the right place to tap into an empty net after a lovely Ruiz flick on saw another youth prospect Leandro Sanca initially denied by Aflalo.

An easy win for Braga in the end, and one that shows the team have not given up the fight for 3rd place in Liga NOS, reducing the gap to Sporting above them to 3 points.

A fine individual season for Paulinho continues then, and one that could yet yield him the Liga NOS golden boot award, trailing Benfica’s Carlos Vinícius by three goals at the time of writing. Three of Braga’s four remaining league games are up against sides presently in the bottom half of the table so Paulinho might just fancy his chances in the coming weeks.