Porto one point away from Primeira Liga glory after Benfica draw 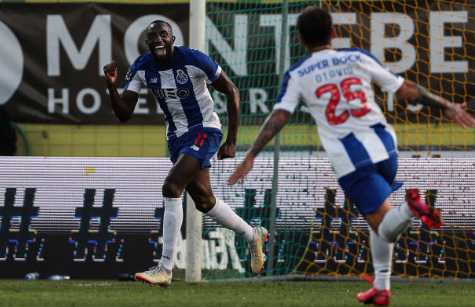 FC Porto are just one point away from claiming the 2019/20 Primeira Liga title after Benfica came away from Famalicão with a 1-1 draw, hours after the Dragons’ 3-1 victory away to Tondela.

Sérgio Conceição’s men had hopes of wrapping up the title tonight, doing their bit with goals from Danilo Pereira, Moussa Marega and Fábio Vieira in a 3-1 win versus relegation-threatened Tondela.

Porto needed an additional favour, however, requiring a Benfica loss, but a 1-1 draw versus FC Famalicão instead sees the wait for a champion extend itself into Matchday 32, at least.

With the league title in sight, Porto required an away win against 15th-placed Tondela, in combination with a Benfica loss later on, to celebrate deep into the night as champions.

Marega almost offered the Dragons the perfect start, directing Jesús Corona’s cross at goal before a strong palm from Babacar Niasse popped up to deny the Malian striker in the 11th minute.

As Niasse prolonged his strong form between the sticks, it wasn’t until the early stages of the second half that Porto managed to get the better of the Senegalese shot-stopper after Danilo glanced a header in at the near post from a corner.

Marega grabbed Porto’s second, in lethal form once more in behind the opposition defence after Corona’s pass enabled the forward the chance to finish one-on-one in the 64th minute.

Tondela’s Ronan promised to make the night anything but a cruise to victory for Porto after pulling a goal back for the hosts, making it 2-1 13 minutes from time from the penalty spot.

But the table-toppers were able to relax deep in stoppage time after a foul on Marega inside the box rewarded Porto with their own chance to score from the 12-yard-mark, taken by the young Fábio Vieira for his second goal in as many games, concluding a 3-1 score-line.

Off the back of Porto’s victory away to Tondela, the Eagles knew one more loss on their behalf would hand the title to their bitter rivals officially, with Famalicão fancied at the Estádio Municipal.

The first half promised to belong to the goalkeepers, as Odisseas Vlachodimos produced an acrobatic save to deny Pedro Gonçalves’ curling effort prior to Rafael Defendi’s stop from point-blank range at the other end, denying Pizzi.

The latter returned to haunt the Famalicão keeper just three minutes later, however, despite Defendi’s best efforts to keep Benfica out through Haris Seferovic’s initial shot, with Pizzi hoovering up on the rebound in the 37th minute.

Benfica’s top scorer could’ve repeated his act in the 58th minute, again reacting quickest to a Defendi save before proving to be more forgiving this time around with his accuracy, shooting wide.

Famalicão reserved their danger for later on in the contest, firstly surprising through Fábio Martins’ effort against the near-post before Walterson almost found the top corner in the 82nd minute with a curler roaming just wide of the mark.

The hosts’ equaliser would soon come and it was from the foot of an ex-Benfica man that the game would be drawn level, with Guga finding the route to goal via Fábio Martins’ cut-back.

Issuing no response, with just three games of the season left to go, Benfica's 1-1 draw leaves Porto requiring  just a point versus Sporting to secure the title.