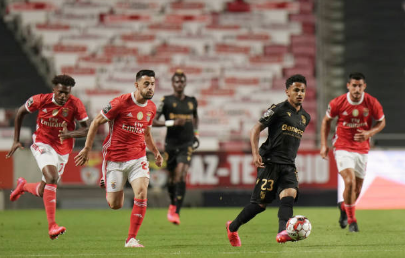 Benfica have prolonged FC Porto’s wait for the Primeira Liga title after registering a 2-0 home victory versus Vitória de Guimarães on Tuesday night.

The Eagles, in a game generally dominated by the visitors, were able to strike late in both halves to clock up a 2-0 victory, leaving Porto to search for the point required to nail champion status themselves, against none other than the in-form Sporting.

Elsewhere, Braga were unable to ramp up the pressure on the Lions, having led 1-0 against Belenenses at home before to two sides closed out with a 1-1 draw, leaving Sporting two points clear of the Arsenalistas prior to the Clássico.

With the league title seemingly in Porto’s hands, Benfica’s goal at the Estádio da Luz was simply, at the very least, to delay such celebrations, searching for all three points against Europa League-chasing Vitória.

The visitors kept the Lisbon giants under real pressure, hitting the bar through Marcus Edwards in the 18th minute before Bruno Duarte was denied by cat-like reactions from Odisseas Vlachodimos.

Benfica were lucky not to be heading into half-time with ten men following a handful of mistimed tackles from a yellow-carded Julian Weigl, with the hosts instead taking a 1-0 lead into the interval via Chiquinho’s opener in the 37th minute.

Vitória pressed further in the second half, seeing a João Pedro goal chalked off for offside in the 85th minute before Haris Seferovic eased the tensions with Benfica’s second a couple of minutes later, securing a 2-0 victory.

As Sporting geared themselves up for a Clássico away to Porto, Braga were out to put in place a return to third, anticipating a potential slip-up from their fellow top 3 hopefuls.

Herve Koffi stood between Braga and the opener, denying both Fransérgio and Paulinho between the sticks before Ricardo Horta placed a dampener on the Belenenses shot-stopper’s evening, striking across goal from close range after Francisco Trincão’s unique find in the 42nd minute.

Horta came close to doubling both his and Braga’s account five minutes into the second period, beating the wall with a free-kick that would go on to clip the top of the crossbar on its way out for a goal kick.

Belenenses took their chance to bounce back whilst the score was still tight, initially threatening in the 67th minute through Edi Semedo’s shot wide before Matteo Casierra equalised with his head with ten minutes to spare. The team from Belém secured a crucial point in their fight for survival, going two clear of the relegation zone and consequently complicating Braga’s planned retrieval of third place.