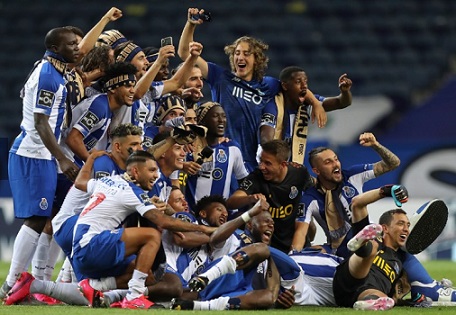 Even most fans of the Blue and Whites would agree this is not a vintage Porto side, but the team have won the most games, lost the least, scored the most goals and conceded the fewest out of all 18 Liga NOS clubs in 2019/20, and with two matches to go they are eight points clear at the top of the table. There can be no doubt Sérgio Conceição’s men are worthy champions.

This season will go down in history, not only because of the unprecedented interruption because of the Coronavirus pandemic. Never before had a team who had been seven points clear at the top of the table at the halfway stage failed to go on to win the title. It happened this season, with Porto taking full advantage of Benfica’s implosion.

Little surprise, therefore, that despite the lack of fans in the stadium to rejoice with the team, the post-match reaction was no less euphoric for it.

“The key was the togetherness of the squad. The way we believed in ourselves at a difficult time – after the game against Braga we were a considerable distance behind – but it was essential we kept the belief in what we were doing.

“We had a lot of difficulties. If there are people who do not like losing it’s me and the president. We are very competitive. It was a very long season. The players deserve the credit for winning this title, but we’re going to continue working hard because we have a Portuguese Cup to win.

“We won one of the most important titles in Porto’s history. I’d like to dedicate this title to my family, who suffer a lot, my wife and my children and my parents.”

“I think that nobody can deny the justice of this title. I think only a team like FC Porto, a club like FC Porto, could manage to come out of a situation we were in in January, at the halfway stage of the season, seven points behind the leader. Only this club, this coach, these fans, these players, could turn around a deficit of seven points, and turn it into an eight-point lead. It was proof of what FC Porto is made of.”

This season was the most intense in all senses, for everyone. We were seven points behind, lots would have thrown in the towel, but we knew we could turn it round. We believed in ourselves and now it’s time for everyone to celebrate.

“What drove us to the title? Our leader, who did not let anyone drop their head. He told us to keep working the same way. It would have been a sin for us not to win this championship, with the team we have and the way we work. The strongest dressing room would end up winning and we never stopped believing.”

“The team is to be congratulated for what we did, and not only in this game. Sporting were in very good form but we knew how to cancel out their strong points. This is down to the hard work and sacrifice our squad put in, we never stopped, not even during the confinement.

“What made us champions? Above all, the togetherness we had. We know we represent a very important region of the country and we all identify with this region. When things get tough we use this strength to overcome adversities. If I’m not mistaken, in the first game of the season against Gil Vicente [a defeat] I said we lose together and we win together, and today is proof of that. Not only us the players, but the entire club and all the fans.

“Celebrating without the fans? It’s sad, but our society has to go through this. It’s a new situation for everyone, it tough for us, it’s not easy doing tests all the time to be able to play, but what’s important is being able to celebrate at the end with this group, which is fantastic, respecting the health guidelines. I want to send kisses to my daughters, who are my pillars and who are the reason I’m able to be here still playing.”

“I’m really happy, I think the team has a great togetherness and strength. I’m pleased we’re all together celebrating. The fans, in the street, on the hotel roof, were always with us, even when we played far away, albeit respecting the safety rules.

Congrats to Porto for winning the title, which was worthy in the end. They finished the season the strongest, and beat both their main rivals home and away, so there can be no arguments that they are not deserved champions. The way Benfica...

Congrats to Porto for winning the title, which was worthy in the end. They finished the season the strongest, and beat both their main rivals home and away, so there can be no arguments that they are not deserved champions. The way Benfica imploded after the loss to Porto in February and were so badly affected by that defeat, means there is no way they deserved to be champions this season, despite having the strongest squad in Portugal on paper.

I have to say though that this season was the worse season for the Portuguese league that I can remember. I have been following football since around the early 90s and I really can't remember any other season when each of the big 3 in Portugal were so mediocre all at the same time. This was the weakest Porto squad I have ever seen, no doubt about it (remember they couldn't even get past Krasnodar in the CL qualifier). And the Benfica of the second half of this season was the worse Benfica I have seen since the very early 2000s, with some really shocking performances since February. The Portuguese teams' performance in European competition is total confirmation of my point, with not one getting further than the 4th round of the Europa League. The Corona virus disruption only added to the mediocrity I think, and it was just a season to forget on the whole. Not for Porto fans of course, but even they will surely admit that this was one of their most mediocre teams ever that can't hold a candle to previous title winning Porto squads.

It's a little concerning for our league, especially as it seemed to have made a lot of progress in the last decade. But this last season seemed like a real regression. Hopefully next season we see a major improvement in quality and the teams do much better in Europe.

Brah, I don't know what you're talking about. How can you not be impressed with Sergio Conceicao's tactical nous? The way he shouts at Nakajima is inspiring. His groundbreaking formation of 4-4-2 and his tactics of "run as fast as you can...

Brah, I don't know what you're talking about. How can you not be impressed with Sergio Conceicao's tactical nous? The way he shouts at Nakajima is inspiring. His groundbreaking formation of 4-4-2 and his tactics of "run as fast as you can towards the defence"?

If you aren't impressed by that, surely, you must be in awe of Tiquinho Soares, the man with 2 left feet. Or Manafa, the right-back who's motto is "be right back"?

And if that doesn't inspire you, I am sure you will be amazed by the fabulous way UEFA can "clear" Man City of cheating and overturning their ban in the Champions League, but simultaneously punishing them for cheating by fining them $10 million.

Football and it's politics are at the top echelon of recorded history!

Congrats to Porto.
They were deserved Portuguese league champs. The reality is all the top teams were mediocre at best.

Benfica an absolute joke for the second half of the season. Quite unacceptable.

Now although Porto were not spectacular,...

Congrats to Porto.
They were deserved Portuguese league champs. The reality is all the top teams were mediocre at best.

Benfica an absolute joke for the second half of the season. Quite unacceptable.

Now although Porto were not spectacular, they were far better than the rest in the league as evidenced by their big game wins in the league as well as being better in just about every other statistic?

As Chris said above, they definitely aren’t a well oiled machine with their launch ball forward and everyone run onto it. But the sad reality is that is more than enough to win most games in this league as of late.

I’m always hopeful things will ‘improve’ every season. They rarely do, but if we are honest the quality doesn’t have a long way to drop as is so only going up from here.... I hope lol

Ever since third party ownership was banned, Portuguese clubs teams have not been able to compete in Europe. The only major transfers have been young Portuguese players. It's going to be more and more rare for there to be another Hulk, Falcao,...

Ever since third party ownership was banned, Portuguese clubs teams have not been able to compete in Europe. The only major transfers have been young Portuguese players. It's going to be more and more rare for there to be another Hulk, Falcao, Magic, Di Maria etc. The record breaking investment in a player was only 20 million, for that flop RDT.

Read More
Mike D
There are no comments posted here yet