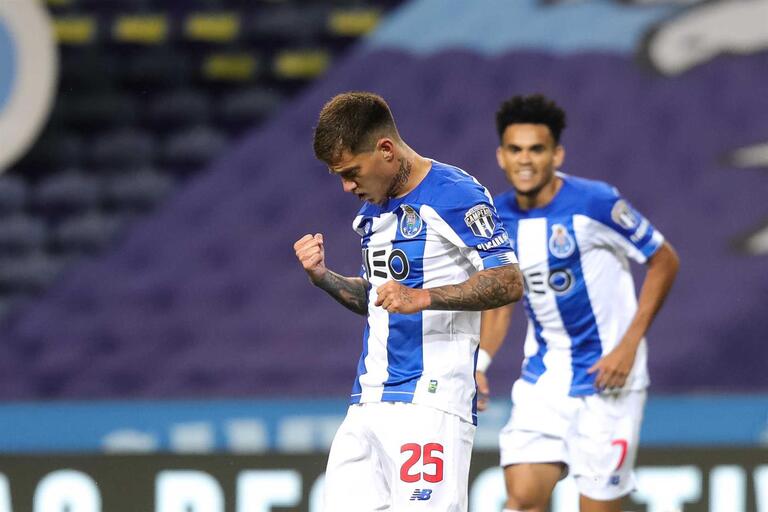 Just one more round left of Liga NOS 2019/20 as a tumultuous campaign in more ways than one draws to a close. Jornada 33 provided its share of drama to ensure a nervy finale coming up this weekend, Famalicão and Rio Ave both drawing their games 2-2 to keep the battle for Europe extremely close.

The relegation showdown is far from over too, Paços Ferreira and Belenenses got themselves out of it with vital wins to leave Portimonense, Vitória Setúbal and Tondela duking it out to avoid joining Aves in descending the division.

Matters at the top are more done and dusted, most notably Porto already being declared league champions. They celebrated their coronation with a thumping victory over Moreirense in which PortuGOAL Figure of the Week Otávio was at his influential best.

Otávio is a player who arguably flies under the radar a little even in a league like the Portuguese but it would not be inaccurate to say he has been one of the most consistent performers in the country over the last 3-4 years. Porto snatched him up from Internacional in his native Brazil back in 2014, and while the player looked a little raw initially a loan spell with Vitória Guimarães proved useful for his development and the Brazilian has not looked back since returning to the Dragões in 2016.

Since then he has been a key part of Sérgio Conceição’s double title-winning team. There is more than meets the eye with Otávio, who on first glance looks a fairly diminutive, tricky and tidy player but despite standing at only 5ft 6ins the 25 year old is fiercely competitive and has a clear desire for working hard and winning.

These mental attributes have seen him become the perfect match for Conceição’s demands, particularly as Otávio can back this up in technical terms. His versatility has also been key, able to operate from either flank or in a more central attacking midfield position. More so of late he has even dropped deeper centrally, playing closer to anchorman Danilo and he has typically excelled in this role also.

It was from deep that Otávio dictated a destruction of Moreirense at Estádio do Dragão on Monday night. His clever play was the catalyst for the opening goal after only 4 minutes, quickly controlling and moving the ball onto Alex Telles after exchanging passes with Danilo. Telles’ trademark whipped cross was then gratefully nodded in by the waiting Luis Díaz.

Porto were then pegged back by a goal from Moreirense’s Fábio Abreu to draw level at half time. It did not take the champions long to retake the lead in the second period however and it was Otávio on the scoresheet. He had to be persistent, slamming the ball home at the third attempt having twice been denied by goalkeeper Mateus Pasinato and then defender Lazar Rosić.

Porto kicked on from here and raced into a 4-1 lead through a Telles penalty and a superb Moussa Marega free kick. Otávio thought he had assisted number five when his cross found Tiquinho Soares to score before the offside flag was correctly raised, but the midfield maestro would end up setting up his compatriot twice for a late brace.

The first of which was a thing of beauty. Evoking Arsène Wenger’s golden Arsenal teams, Porto cut through the Moreirense backline with some brilliant one touch passing. Instigated by Otávio, he found Díaz who then returned the ball with a stunning back flick. Otávio could then have gone on alone but unselfishly set up Soares for a tap-in.

The Otávio-Soares combo was not finished as Porto made it 6-1 with just three minutes remaining. More good team work from the home side, Díaz found Otávio who again gave Soares the simplest of finishes at the back post with a pinpoint ball across the box.

A resounding win to celebrate Porto’s first match as Liga NOS champions, and importantly for them a showing that they are not in the mood to slow down with an massive Taça de Portugal final against Benfica coming up.

Remarkably Otávio’s goal was only his second of the campaign, an area he will look to improve upon in 2020/21 but arguably more pertinently his assists were the 13th and 14th for him, which is a very respectable total but also a reflection of what he brings to the team. Often going unnoticed this season with the likes of Telles and Jesús Corona grabbing the majority of the headlines, Otávio has been right up there with the pair in helping regain the championship.

Somewhat belatedly it appears some top sides across Europe are starting to make enquiries after the Brazilian, notably former Porto boss Julen Lopetegui supposedly keen on a reunion between the pair at Sevilla. At 25 Otávio still has plenty of time to improve and is one to keep an eye on this summer and beyond.

The one benefit (?!) of Porto having to sell every summer or players leaving is that players like Otavio get their turn. In his first title-winning season Conceição didn't seem to trust Otavio (or Corona) much and both were in and out of the...

The one benefit (?!) of Porto having to sell every summer or players leaving is that players like Otavio get their turn. In his first title-winning season Conceição didn't seem to trust Otavio (or Corona) much and both were in and out of the team but injuries/players leaving or being about to leave means he got his chance. He's a clever player, always looking to play forward and is all over the pitch linking up play. I've already read a few rumours that Wolves are interested. I think he should stay another season to try and tighten up his play and get improve his goalscoring. Uribe has been a good find so if/when Danilo goes Conceição will still have options.