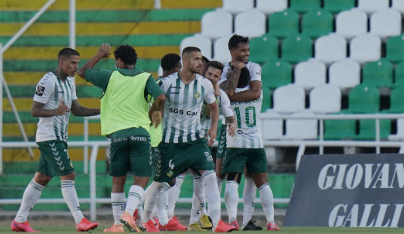 Portimonense have been relegated from the Primeira Liga, despite defeating Desportivo das Aves 2-0 at home, after both Tondela and Vitória de Setúbal secured their stay with wins of their own.

The team from Portimão required a win and losses elsewhere to stay up on the final day of the Liga NOS season, holding up their end of the bargain with joy against Aves, also relegated to the second division.

Portimonense’s great escape was undone by wins in Moreira de Conegos and Setúbal, however, as Tondela bettered Moreirense with a 2-1 win alongside Vitória’s 2-0 victory against Belenenses, keeping both sides up.

In desperate need of a win against last-placed Aves, as well as a combination of defeats for both Setúbal and Tondela, Portimonense had it all to do in order avoid relegation from the Primeira Liga.

The best the southern outfit could produce in their bid to work a miracle was a header wide from Dener in the 17th minute, with Portimonense having to wait until the 52nd minute for a second crack of the whip, again attracting no luck through Bruno Tabata’s shot from a tight angle.

A big header from Willyan finally broke the deadlock for Portimonense two minutes past the hour-mark, leaving the hosts praying for turnarounds in the games around them.

Dener doubled Portimonense’s lead but the thinking was too wishful, however, as both Vitória and Tondela took victories from their games to spell out relegation for Paulo Sérgio’s men.

With their destiny in their own hands, only failure to win at home on Sunday night versus neighbouring Belenenses could see Setúbal end a lengthy and often rocky relationship with the Primeira Liga, sitting a point above an endangered Portimonense side.

As both sides traded blows early, Vitória’s Jubal landed a definitive strike in the 31st minute when rising highest to glance in Eder Bessa’s corner, giving the Sadinos a 1-0 lead.

Alex almost powered his team to an all-important second after intercepting possession and probing through Belenenses’ defence on the counter, with his shot just missing the required accuracy on its way past the post in the 44th minute to add greater comfort to the situation.

In a moment to look away from for both Belenenses and Portimonense fans, Alhassane Keita had the equaliser within his grasp when he was found in front of goal by a whipped cross, with the Guinean's connection on the volley ultimately letting him down against Giorgi Makaridze in the 74th minute.

Vitória continued to look like the more threatening side once more in the final embers of the game, allaying all fears of the drop in the 94th minute through Pirri’s decisive goal to secure a 2-0 win and Primeira Liga status.

Holding the most tranquil task of the night, all Tondela required was a point away to Moreirense, or, failing that, a non-victory for either of the two trailing survival hopefuls in order to rubber-stamp their status as a Primeira Liga club for another season.

Causing danger through Jonathan Toro on occasions, a handball from Abdu Conté inside the box offered Tondela the chance to make good use of their more dominant spell, going a goal ahead through João Pedro’s conversion on the brink of half-time.

An equaliser from João Aurêlio readied Tondela for a nervy final 20 minutes, especially with both Portimonense and Vitória leading elsewhere, but all the worries looked set to be extinguished after Steven Vitória barged into Richard inside the box for a second penalty, three minutes from stoppage time.

The responsibility from the spot fell Pepelu’s way, in the on-loan Levante man’s final appearance for the club, making no mistake to ensure Tondela stayed up with a 2-1 victory.