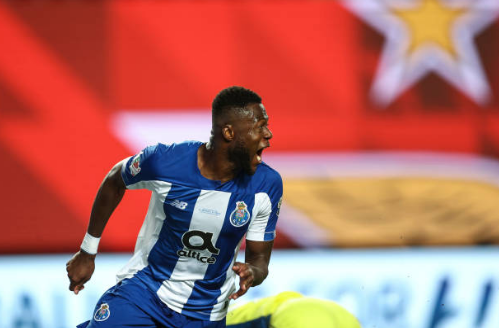 FC Porto have completed the league and cup double after defeating Benfica 2-1 in the Taça de Portugal final in Coimbra, this Saturday, despite a first-half Luís Diaz red card.

The Dragons were forced to face the Eagles with just ten men after Diaz’s dismissal, in addition to Sérgio Conceição’s sending off, leaving Porto with a tall order going into the break, still locked at 0-0.

An early second-half double from Chancel Mbemba turned the tide for the Blue & Whites, however, standing strong in the face of a late Carlos Vinícius penalty to secure the club's first Taça de Portugal trophy since 2011 with a 2-1 win.

In the build-up to the clash, there was a welcome return to action for Porto’s Mateus Uribe after last week’s injury scare, whereas Haris Seferovic was able to fight off competition from Vinícius to spearhead Benfica’s attack for the season’s curtain-caller.

The first chance of the showdown fell Porto’s way after Jesús Corona found a route past Julian Weigl inside the box before forcing a low save out of Odisseas Vlachodimos, four minutes in.

Despite the early promise, the game soon transcended itself into a cagey affair, ultimately spelling trouble for the Dragons in the 38th minute. Already on a yellow card, Luís Diaz was pulled up for an obvious studs-up foul on André Almeida, leaving Sergio Conceição’s men to tackle the rest of the final down to ten men.

As tempers flared, ill-discipline extended itself to the dugout after the Porto boss himself was shown out to the dressing room, meanwhile both sides called time on the first half locked at 0-0.

The Primeira Liga champions were quick to place Benfica in a spot of bother soon after the restart after Vlachodimos flapped at an Alex Telles set-piece, allowing Mbemba to nod into an empty net with a measured header and give Porto a 1-0 lead in the 47th minute.

Porto continued to find ways to deter the disadvantage of being down to ten men, again through a set-piece, with Mbemba popping up alone once more to double the northern outfit’s lead in the 57th minute.

Following a quick free-kick, Benfica almost encountered some set-piece joy of their own after André Almeida spotted Vinícius with a cross, wasted by the Brazilian striker with a downwards header bouncing over.

The Eagles were offered the chance to ramp up the pressure on Porto after earning a penalty in the 83rd minute, converted by Vinícius in Pizzi’s absence.

Nélson Veríssimo’s team came inches away from attaining a much-desired equaliser as the ball fell perfectly for Jota to volley at goal from the edge of the box, with the young winger denied only by the post in the 91st minute.

Waves of Benfica pressure kept coming Porto’s way, but the league champions resisted en route to their 17th Portuguese Cup, equaling Sporting in the history books after a hard-earned 2-1 victory.

Well for all Benfica fans, I'm sure watching that final was just like a microcosm of these absolutely horrid and mediocre last 6 months for the club! The worst half a season for the club since the early 2000s and probably in the entire history of...

Well for all Benfica fans, I'm sure watching that final was just like a microcosm of these absolutely horrid and mediocre last 6 months for the club! The worst half a season for the club since the early 2000s and probably in the entire history of the club. Against a Porto team down to 10 men for more than half the match ( and I repeat what I've said a few times this season already: the weakest Porto team I can remember seeing in all my years following this game), yet we still looked shockingly devoid of ideas and intensity in play, absolutely ZERO service into the box, and also very shaky at the back (what a soft couple of goals to concede last night)...the same as in virtually every match I've seen us play since around February. Benfica have got so bad since February that it's been painful to watch them and to see how much they have regressed in the last year compared to the progress that had been made in the last decade.

Jorge Jesus has a big job on his hands and I think we are going to need to see a total revolution when he takes charge, in both general style of play and in the make up of the first team. Surely we have seen the last of the likes of Jardel, Ferro, Andre Almeida, Cervi, Chiquinho and Seferovic as first team regulars...with all due respect, simply not good enough to be first teamers at a club like SLB. In fact, of the 11 that started the final last night, I would personally only want to see Odysseas, Ruben Dias and Gabriel remain as first teamers for next season. Weigl has not impressed at all since arriving, and in fact our poor run of form started since he came straight into the first team back in February. Florentino is a much better option to be our starting DM and should be next season. Pizzi's statistics for this season may look impressive, but I finally agree with what a lot of his critics have been saying for years: he only produces against smaller and weaker opposition. In the big matches, like against Porto or in matches in Europe, he's simply non-existent!

Anyway it's not all doom and gloom, we just have to quickly move on from this awful season and put it behind us. Jorge Jesus is certainly going to improve things in relation to this last season. With JJ, we will surely see much more intensity and purpose in the play, a clear offensive plan and constant service into the box, aspects that were totally missing this season. But I do think that we also clearly need a serious injection of quality into the squad for next season. I think we need at least: a reliable second goalkeeper, a quality right back, TWO quality center-backs, a dynamic box-to-box CM, a winger with speed and who can provide service into the box, and another quality forward. LFV knows that he has to spend some serious money this pre-season and seriously boost the squad, or quite simply he's going to lose the club elections in October.

Anyway congrats to Porto for winning the double, they were the most consistent team overall, in a largely very poor season for Portuguese club football (possibly the worst I can remember in my time as a fan). The only way is up from here, and next season has to be better overall! Here's hoping!

Question for you Andre, with a ridiculous $4 million per season salary for your beloved Mulleted one, where is the money supposed to be coming from for all these squad upgrades?