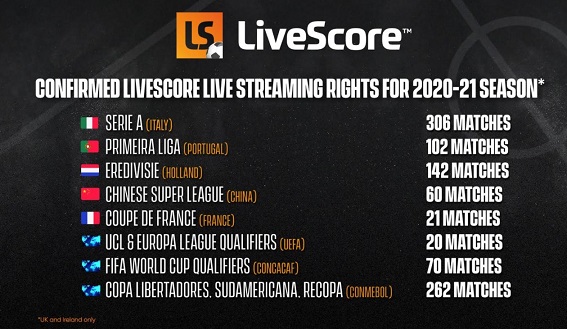 Good news for fans of Portuguese football residing in the UK and Ireland! LiveScore has announced expanded rights for its 2020/21 Free-To-Air Football Service, including an average of three matches every round of Portugal’s Primeira Liga.

After achieving half a million viewers since June, the popular mobile phone app has confirmed the leagues available for live streaming next season: Primeira Liga, Serie A, Eredivisie and the Chinese Super League alongside a host of global competitions.

LiveScore, one of the world’s leading real-time sports updates and streaming service providers, has announced an expanded set of league and competition free-to-air live streaming rights for the 2020/21 football season, bringing its two million users in the UK and Ireland closer to the action than ever before.

Fresh from its coverage of the recent season climax which saw Juventus emerge as champions, LiveScore will live stream a staggering 306 matches from Italy’s 2020/21 Serie A campaign – 80% of the total fixtures being played – with each one available for free within the UK and Ireland and fully-integrated via the LiveScore iOS and Android apps. Premier Sports will continue to broadcast every game from Italy’s popular top flight as part of their existing offering.

Portugal on the menu again

In addition to the Serie A deal, which was negotiated by Saran Media Group and agreed with Premier Sports, LiveScore will once again stream matches from Portugal’s Primeira Liga, while for the first time the service will feature matches from the Eredivisie in Holland as well as the Chinese Super League.

Football fans will also be able to follow a host of cup competitions across Europe as well as Central and South America. Alongside the Coupe de France, a number of UEFA Champions League and Europa League qualifiers will be made available to stream on the OTT service. Finally, the United States and Mexico will also be amongst the nations featuring in CONCACAF FIFA World Cup 2022 regional qualifiers, while lovers of South American football can feast on the drama of the Copa Libertadores and Sudamericana.

LiveScore’s free-to-air live streaming service launched for the UK and Ireland audience in June, putting the brand at the forefront of the return of live sport during the COVID-19 pandemic. The service attracted more than half a million unique viewers in its first two months, with a peak audience of 125,000 being reached during AC Milan’s 4-2 comeback victory over Juventus on Tuesday 7th July.

“After a fantastic start for our new LiveScore free-to-air live streaming service, we’re excited that our offering is set to get bigger and better for the new 2020-21 season. As well as returning to the hugely popular leagues in Italy and Portugal, by unveiling a number of new competitions we are continuing to innovate and offer our UK and Ireland audience the most immersive sports coverage possible.”

“This is an important next step for LiveScore as we continue to expand our digital content offering. In addition to the live streaming options for our UK and Ireland audience, global LiveScore users can expect to enjoy a range of on-demand content from across the football world including through our partnership with LaLiga Santander. We’re excited to kick-off the 2020/21 season!”

The new OTT service complements LiveScore’s existing unparalleled coverage, content and statistics for hundreds of sporting leagues and competitions around the world, which has a global audience of 56 million monthly active users, including 2 million in the UK and Ireland alone.

LiveScore’s free-to-air live streaming capability is facilitated in partnership with leading sports OTT specialists StreamAMG. Premier Sports will remain as the exclusive UK and Ireland broadcast TV partner for both the Primeira Liga and Serie A, with their subscribers able to watch all matches live on TV.