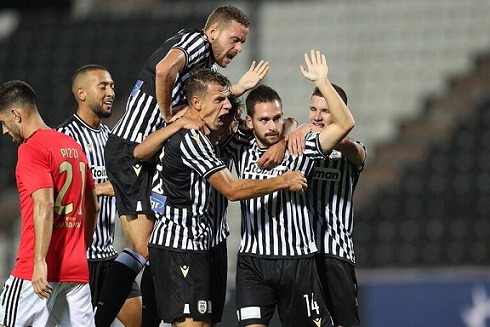 Benfica’s brand-new chapter, with Jorge Jesus again at the helm, got off to the worst possible start in Greece tonight.

Despite a summer of heavy investment and voicing of big ambitions in the Champions League, the Eagles crashed out of Europe’s foremost club competition at the very first hurdle, beaten 2-1 by PAOK, managed by Portuguese coach Abel Ferreira.

In these pandemic times the match was played without fans and it was a one-off tie. The first consequence of football during Covid-19 appeared to remove a possible advantage for PAOK, who could not count on the fervent backing of their notoriously passionate supporters. The worry for Benfica fans, though, was the fact that a game decided in one match might favour the team who, theoretically at least, were the underdogs.

With Benfica’s squad costing seven times as much as PAOK’s, it was no surprise the Portuguese team were widely expected to make it to the play-off, and those predictions looked on course to be proved correct in a dominant first half by the away team.

Due to the Covid-19 pandemic, many fans have been missing the live thrill which cheering in the stands offers. For those that are sorely missing spectating at a live match, new online casinos USA may be able to provide the thrill you’re missing. With a range of online games available, including live dealers, sport themed games, and real time action this could offer the excitement you have been missing.

The first 45 minutes were played almost entirely in the half of the pitch Benfica were attacking, with Pizzi and new signing Everton Cebolinha especially impressive. The Brazilian set up Seferovic with a sumptuous cross, only for the Swiss striker to fluff his header, and shortly afterwards Pizzi was unlucky to see his free kick cannon back off the post.

Another Brazilian midfielder making his official debut for Benfica, Pedrinho, then brought a sharp save out of Zivkovic with a rasping shot from distance.

Despite reaching the interval goalless, so comprehensive had been Benfica’s superiority in the first half that it appeared only a matter of time before Jorge Jesus’ side made the breakthrough, but the game drastically changed complexion in the second half.

Shortly after the restart a swift break by the hosts saw a menacing cross whipped across the box, with Grimaldo making a timely clearance, and soon afterwards it needed two excellent blocks from Rúben Dias to stop shots from dangerous positions in the Benfica box.

Nevertheless, Benfica were close to taking the lead again in the 57th minute, a lovely pass by Taarabt playing in Everton, whose shot drew another good save out of Zivkovic.

Disaster struck for Benfica in the 63rd minute when PAOK’s increased confidence was reflected in another well-worked counter-attack which ended with Jan Vertonghen turning the ball into his own net from close range to give the home team the lead.

What happened next will be the most worrying aspect for Jorge Jesus, with Benfica losing their composure and rarely looking as threatening as they had done in the first hour of the match, while PAOK were increasingly dangerous whenever they swept forward at speed.

JJ threw into the fray club record signing Darwin Nuñez and last season’s top scorer Vinícius, but it was a PAOK substitute who made the difference, as Andrija Zivkovic – who left Benfica to join the Greek side just last week – produced a neat finish to double the lead for the Greek side in the 75th minute.

Benfica huffed and puffed but never looked like recuperating the deficit, and Rafa’s late header was too little too late.

Welcome back Jesus your first major hurdle and you tripped straight away lol.

What I found alarming for the 2nd Greek goal was absolutely no one fouled him and simply let him run and run and run.

We see what Sporting have to offer but I'm not expecting great things for them and truth be told them not going to Europa League would be a blessing in disguise, simply don't have the squad to be competing.

Surely this is a fictitious article. The god among men, Jorge Jesus is at the helm of Benfica, with $80 million in investments, and he fell to the European GIANTS PAOK?????

Wow, that was an awful result of note! I know that this was always going to be a potentially dangerous situation due to the one leg format and us having to be away from home (super unfair rule that has to be said)...and it still being practically...

Wow, that was an awful result of note! I know that this was always going to be a potentially dangerous situation due to the one leg format and us having to be away from home (super unfair rule that has to be said)...and it still being practically pre-season and the team still lacking competitive rhythm. But still, you simply can't lose against a (with all due respect) team like PAOK with so much at stake, a team that has never been even once in the CL group stage. This was way worse than last season, when we at least lost narrowly against Leipzig and Lyon, who then both reached the CL semi finals in the end.

Jorge Jesus really screwed up in his team selection. The moment I saw the starting 11, I got a bad feeling. I mean, with all this investment in new players over the summer, bringing in Jesus to supposedly revolutionise things....we still see the team starting with Seferovic, Andre Almeida and Taarabt? Absolutely crazy! Who in their right mind could possibly think Seferovic is a better option to start such an important match as this than Vinicius? Yet we've had three different coaches in the last 6 months who have all done the same thing. How is it that Andre Almeida is still the first choice right back at this club for the 4th successive season. How do we still not have a better option for right back than that? Well we do, I can already see that Gilberto is better after just a few weeks at the club, yet who starts tonight and who's on the bench? Jorge Jesus is a top coach and I still expect we will improve with him, but no doubt he got it all wrong tonight with his selections and needs to learn from these errors (for example, Seferovic, Almeida and Taarabt simply can't start big matches like this)

Well I've been saying on this site for years already that what's really wrong at this club is the leadership. Replacing this president and his team is long overdue. 17 years in charge of a club is way too long already, and to keep things healthy a club needs refreshing every few years. This is turning into a dictatorship now....yet we are not progressing at all in terms of results in European competitions, more like regressing. For the vast majority of Benfica fans, it's simply not enough winning the Portuguese league anymore...they all want to do something big in Europe again and I've come to the conclusion that we are simply never going to under LFV, because for him simply winning the league title is enough, and this club badly needs a lot more ambition than that. Perhaps the good thing about this result tonight is that it could mean LFV will lose the elections next month, although I wouldn't bank on it.

Anyway the team just has to move on and think about the next match now, disappointing result tonight, but that's life. No point dwelling too much and better to just move on with things!

First, I want to thank Zivkovic for always proving my opinions correct. The guy always had potential when he came over. I have seen the guy being abused all over social media for caring about money and not having any 'talent'. Lol. The guy played...

First, I want to thank Zivkovic for always proving my opinions correct. The guy always had potential when he came over. I have seen the guy being abused all over social media for caring about money and not having any 'talent'. Lol. The guy played wing and delivered crosses better than Cervi and Rafa, and always has a sneaky shot. Yet is the scapegoat and cast aside. I'll be wearing my Zivkovic jersey with pride

Second, Andre, great points! Honestly, there is some bad juju/luck in this team. There needs to be a fire-sale immediately with certain players. What happened to the rumors of Pizzi and Rafa going to the EPL or Ligue 1? Grimaldo nor Andre Almeida (don't get me started) can't defend if their lives depended on it. Seferovic is someone I've been wanting gone for years. The guy performs terribly for Benfica, but when he plays for the Swiss NT, he somehow turns it up and performs. I feel bad for Ody. He's going to have a very long season ahead of him with shocking defending like that. I don't know what it is about Benfica, but it's like they always play scared when they are in the Champions League. For all the flack Rui Vitoria received, he still brought them as far as he did

The presidency is something I could go back and forth on. How quickly people forget the pre-LFV days, a true dark-era for Benfica. Druing the LFV-era, there have been trophies and silverware abound! You can never please everyone. The first Jesus-era was filled transfers from South America - Benfica fans wanted more homegrown talent. After JJ left, Vitoria and Lage focused on homegrown talent from the B team - and now fans want the team to go after everyone and anyone.

Benfica do not have the talent or financial capabilities like the Big Boys to actually compete in the CL.. Unless we get lucky with what we have now next season

Taarabt should be playing for an English League one side.

Benfica will suffer for ages for this result and missing out on the CL money and exposure, which could have put some of their players in the shop window.

Invested so much money during a worldwide economic crisis and it will backfire.

Benfica will suffer for ages for this result and missing out on the CL money and exposure, which could have put some of their players in the shop window.

Invested so much money during a worldwide economic crisis and it will backfire.

Sporting quietly been preparing and going about their business. I am confident in SCP this season.

Shocking result. Piss-poor! But maybe its JJ's plan to give himself only the Liga to focus on this season...!
Seferovic? Really? They deserved to lose.