Is Ricardo Quaresma in the form of his life? 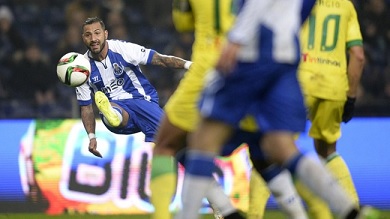 That FC Porto and Portugal winger Ricardo Quaresma is one of the most extravagantly talented footballers to ever play the game, there is little doubt. However, until recently the feeling remained that he never hit the heights he could have, owing to an overly selfish playing style and/or a lack of football intelligence.

But all the signs are that “Harry Potter” has found a hitherto elusive maturity and peace of mind that is allowing him to at last fully harness his genius for the good of the team. Maisfutebol journalist Pedro Jorge da Cunha explored the idea in an article entitled: “Quaresma: the prodigy who learned to be a team player”.

PortuGOAL provides a translated and abridged version of the article.

Metamorphosis. Transformation. Nobody knows exactly where it started, but everybody can see it.

“For the first time in his career Quaresma does not feel the need to be the team’s prodigy. They’ve managed to convince him to be a team player.” So says João Nuno Coelho, sociologist and specialist in behavioural observation and analysis.

This does not mean that Ricardo Quaresma no longer has the ability to win games on his own. His recent displays show this very much remains the case. What’s different is his attitude and his reactions in relation to the other squad members and the choices made by the coach.

Was his behavioural change triggered by the reprimand from Julen Lopetegui in Lille? In that match the Spanish coach sent on Quaresma in the 88th minute, leaving him just enough time to show his obvious displeasure, and the Porto manager did not like it. The matter became a constant topic of debate in the press in subsequent weeks, with Lopetegui giving the “Mustang” little playing time.

“Lopetegui adopted a different approach. I remember Quaresma’s first spell at Porto, until 2008. Only Co Adriaanse managed to keep him in check. Jesualdo was different, he understood that he had a special personality, and was more benevolent,” adds Coelho.

Jesualdo’s assistant coach in 2006/2007 was Carlos Azenha, and he explains in more detail how the player was man-managed.

“There’s no point hiding the fact that Ricardo was irreverent. But let me make one thing clear: he always worked hard. All footballers are selfish, Ricardo was too, but we were able to take advantage of this irreverence and selfishness. His performances for us were amazing, Jesualdo knew how to deal with him.”

“The idea people have about him is unfair. He was always an excellent team-mate to have in the dressing room. Okay, so he’s irreverent and eccentric yes, but also an excellent friend and an example to follow when it comes to working hard. I was one of the youngest players in the squad and he always helped me.”

When asked about Quaresma’s  performances in 2014/15, Castro says: “Before he was more inconsistent. He does everything more naturally now. And nobody is better at crossing and providing assists.”

His former coach Carlos Azenha, agrees, saying that of Porto’s impressive array of wingers in the current squad, Quaresma tops the bill. “He’s the biggest reference point of this FC Porto team. And he’s the best winger in the squad, even including Brahimi and Tello.

“Tello is a speedy and direct winger; Brahimi is great at dribbling, but he always cuts inside to shoot or look for a combination play. Quaresma has all the skills: he dribbles, he’s still fast, he goes on the outside, cuts inside and is the only one who constantly crosses to the centre-forward. For Jackson it’s much easier playing with a winger like Quaresma.”

All three interviewees in this article are unanimous when it comes to one aspect. “Quaresma’s technique could have taken him to the top of the world, and won him the Ballon d’Or”.

The metamorphosis is ongoing. And Bayern are coming to town.

With many key Bayern players injured, Quaresma's (and Porto's) form improved, and being in Porto, I see a Porto victory in the first leg. I just don't see how Bayern can cope against such a great team right now, when their team is very much...

With many key Bayern players injured, Quaresma's (and Porto's) form improved, and being in Porto, I see a Porto victory in the first leg. I just don't see how Bayern can cope against such a great team right now, when their team is very much depleted and injured.

Jesualdo
This comment was minimized by the moderator on the site

Yes totally... Porto all the way... But Ruben neves and quaresma must start the final...

Somehow sad: Imagine if Ricardo Quaresma and Manuel Fernandes would have had the same work-ethics as Cristiano Ronaldo. Not only one big title would have been the result for the selecçao... Work ethics and will are determinating if you really...

Somehow sad: Imagine if Ricardo Quaresma and Manuel Fernandes would have had the same work-ethics as Cristiano Ronaldo. Not only one big title would have been the result for the selecçao... Work ethics and will are determinating if you really make it to the top, not the amount of talent. Hope, that the so talented youngsters like Bernardo Silva, André Gomes, Ruben Neves etc. will do better. Anyhow I like Quaresma's style of play. I really wish him to do great things for Porto in this Champions League season.