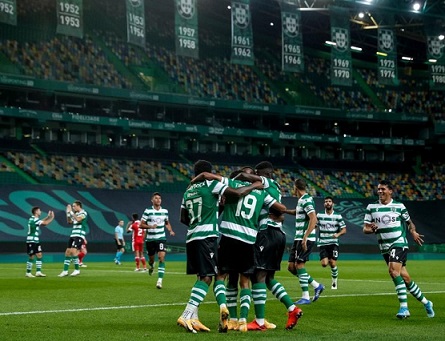 It was a highly positive night for Portuguese football in the Europa League as both Rio Ave and Sporting made it through to the playoffs after ousting Besiktas and Aberdeen respectively.

In Istanbul Rio Ave achieved a spectacular result, knocking out the Turkish giants on penalties after a 1-1 draw over 120 minutes. Back in Lisbon, Sporting’s delayed start to the new campaign and depleted squad due to Covid-19 did not stop them overcoming the Scottish side thanks to an early Tiago Tomás goal.

Nine Sporting players plus their coach Rúben Amorim had to sit out the club’s first competitive outing of the season after testing positive for Covid-19. Having had their first match of the season postponed for the same reason, the Portuguese team went into the game against opponents with 8 matches already under their belt in 2020/21.

Goalkeeper Antonio Adán, centre-back Zouhair Feddal and right wing-back Pedro Porro were three summer signings who made their competitive debut for Sporting. Big-money acquisitions Pedro Gonçalves and Nuno Santos would also have been in the line-up had they not tested positive for the virus.

Yet despite the difficulties in preparing for the game and a new-look XI, Sporting put in a solid performance and ran out deserved winners. In their first attack of note the Lions took the lead. The impressive Wendel won the ball high up the pitch and quickly fed Vietto, who after a neat dribble slipped a perfect pass into the stride of Tomás, whose clinical finish belied his lack of experience. At 18 years of age, the teenage striker became Sporting’s second youngest ever scorer in European competition.

Perhaps weary of the need to conserve energy, Sporting sat back and Aberdeen did most of the attacking in the first half, with Ferguson and Hedges combining well on the left flank. However, the Scots lacked penetration and the home defence dealt with a series of crosses raining into the Sporting box without undue alarm.

Indeed, it was Sporting who were closest to scoring again before the break, Jovane bringing a sharp reflex save out of Joe Lewis from a corner, to leave the score 1-0 at half time.

Sporting improved in the second half, showing composure, enjoying more possession and putting some decent passing combinations together, albeit without really hurting Aberdeen. The exception was a slick move that ended with Pedro Porro – a very promising debut – producing a pinpoint cross for Tomás but the striker headed over the bar when well-placed.

Save a breakaway chance for Ryan Hedges that the tall forward lashed narrowly wide, Aberdeen were kept at bay by Sporting, with the Scottish side showing a surprising lack of urgency or willingness to throw everything at their Portuguese hosts.

The way Sporting played keep-ball for practically the entirety of the stoppage time period was a reflection of how well they controlled their opponents throughout the match, with Adán not having to make a single save of note.

Rúben Amorim will be aware his side must produce far more from an attacking perspective if Sporting are to have successful season but given the circumstances the coach will be delighted to have kicked off the new season with a relatively serene victory.

Sporting face LASK in the playoff in Lisbon next week in another one-legged tie.

by Tom Kundert at Alvalade

Rio Ave are attempting to reach the group stage of the Europa League for the second time in their history (after 2014/15) and are now just 90 minutes away after causing an upset by beating Besiktas in the Turkish capital.

The hosts took the lead on 15 minutes through Guven Yalcin and with both teams’ goalkeepers pulling off a series of impressive saves it looked like that was how it would end. But Bruno Moreira had other ideas, his bullet header from a Carlos Mané cross squaring the match on 85 minutes.

Both sides had chances to win it in the 90 minutes and in extra time, but with no further scoring a penalty shootout ensued, with the Portuguese side winning it 4-2.

“It’s the players who deserve all the credit,” said new coach Mário Silva. “They were brave and I believe all our supporters are proud of them.” It does not get any easier for team from Vila do Conde, with AC Milan arriving in the northern Portuguese town next Thursday for the playoff. “It’s a reward for the players, but big names do not scare us,” said Silva.

I did watch the Rio Ave game. Considering their opponents, Rio Ave did quite well. Just as they could have lost, they could have also won! Fortunately in the end they get to go through and that’s all that matters in the...

I did watch the Rio Ave game. Considering their opponents, Rio Ave did quite well. Just as they could have lost, they could have also won! Fortunately in the end they get to go through and that’s all that matters in the end. Doesn’t get any easier though with Milan as their next opponents. At least with it being one leg, anything can happen!!! LET’S GO.

Didn’t watch Sporting as I kind of expected a snoozfest given sporting a current COVID situation and well their opponents. What matters is they got the job done, one more round to go!!
Come on, we are so close to having 5/5 teams making it to groups!!!!!

Fantastic for Rio Ave to beat Besiktas, didn't realise they have AC Milian next... still its only one game and let's me real Besiktas have been a better European force than AC Milan have been in the last few years.

Fantastic for Rio Ave to beat Besiktas, didn't realise they have AC Milian next... still its only one game and let's me real Besiktas have been a better European force than AC Milan have been in the last few years.

Surprised Aberdeen played quite scared against Sporting, they mustve not realised it was a one game lol Sporting played well all things considering but you could tell they seemed to pace themselves which definitely worked against a weaker team like Aberdeen who really didn't absolutely nothing to merit a draw. Sporting were always closer to a 2nd goal than they were to equalising.