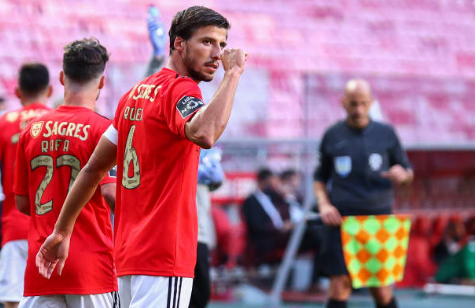 Benfica have announced the imminent departure of Rubén Dias to Manchester City after agreeing a fee worth €68 million for the Portugal international, in a deal that also sees Nicolas Otamendi come the other way.

After days of speculation, the writing seemed to be on the wall for Dias ahead of a rumoured fresh new venture, as he captained Benfica in a final Estádio da Luz outing.

The defender, on the scoresheet in the Eagles’ 2-0 win against Moreirense, added fuel to the speculation at full-time by stating that it was a “very important game” for him and that “to mark it with a goal was very special.”

Jorge Jesus pointed towards a deal being struck, as did Pep Guardiola in the aftermath of Man City’s shock 5-2 loss at home to Leicester City, further highlighting the Citizens’ defensive frailties.

In search of backline reinforcements for the duration of the summer transfer window, City’s new pick sees Otamendi placed on the market and on the verge of returning to Portugal as part of the deal between the two clubs, returning to the nation where he became a Primeira Liga champion under André Villas-Boas and his 2011 Porto side.

The Argentina international was picked up by Valencia, led by Nuno Espírito Santo, in 2014 for €12 million and would last just a year in Spain after an impressive top-four finish with Los Che, as City came calling for his services.

Now 32, Otamendi may not be the only late arrival ahead of next week’s transfer deadline, with the Eagles continually linked with Rubén Semedo, starring for Pedro Martins and his Olympiakos outfit over the past year.

Nice! Looking forward to seeing Otamendi here. As a Benfiquista, I think player rivalries aren’t as emotional as they used to be in the 80s and 90s, unless someone can prove me otherwise lol. Going to the Premier League will do wonders for his...

Nice! Looking forward to seeing Otamendi here. As a Benfiquista, I think player rivalries aren’t as emotional as they used to be in the 80s and 90s, unless someone can prove me otherwise lol. Going to the Premier League will do wonders for his development and Man City in particular.

Honestly, it was time for Dias to move on. He has nothing left to prove in the Portuguese League. Otamendi has more experience at the back and is a bit calmer than Dias lol. We all know JJ loves using his experienced players!

I’m forever grateful that this full Seixal project (That was force-fed by Burro Lage) has been abandoned. You can’t just field a team of youngsters and expect them to win everything.

Read More
John
There are no comments posted here yet