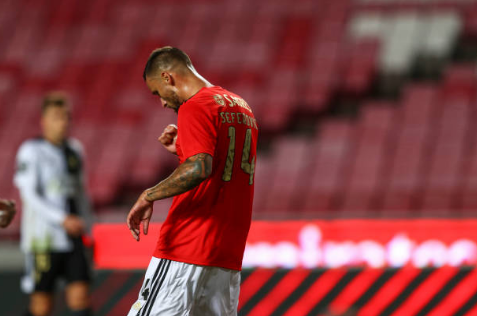 Benfica were made to work for a three-point advantage over FC Porto in the league table after the latter fell to a 3-2 defeat at home to Marítimo, enabling the Eagles to top the table with an identical scoreline against Farense at the Estádio da Luz, this Sunday.

Made to chase the game at the Estádio do Dragão, a brace from Rodrigo Pinho, heroics from Amir between the sticks and a killer blow from Nanu on the counter condemned Porto to their first defeat of the season, passing the baton onto Benfica against newly-promoted Farense.

Jorge Jesus’ men, with the game level, turned the screw in the final ten minutes courtesy of a Haris Seferovic double, maintaining their 100% record in the Primeira Liga and taking them two points clear at the top.

Sporting, with a game in hand, were able to do the same in their visit to Portimão, winning 2-0, meanwhile there was also a first triumph of the season for Carlos Carvalhal’s Sporting de Braga, who took Tondela apart with a 4-0 thrashing, composed in the first half of the encounter. PortuGOAL has more from the weekend.

Plenty was made of Marítimo’s dark arts against Tondela last weekend, edging themselves to victory via the constant use of time-wasting which in turn placed them under the microscope away to Porto.

Moments after having a goal ruled out by a 9cm-offside call, proceedings had Porto in line for much of the same after Pinho’s opener for the visitors, but Pepe was on hand to uncover an equaliser with his head on the stroke of half-time.

Pinho reinstated Marítimo’s lead with a rebounded header in the 52nd minute as Amir starred at the other end, keeping out Moussa Marega from close range.

The Iran international’s next job was to face Alex Telles from the spot, with the Marítimo keeper keeping up appearances and denying the Brazilian in, most luckily, his final outing for Porto.

On the counter, Nanu placed Marítimo 3-1 up after crowning a solo run with a powerful strike, securing the three points that came complete with an Otávio consolation goal in the 99th minute.

An increase in temperature had Carvalhal sweating over a positive result away to relegation-candidates Tondela, with his Braga side plunged deep in the table following defeats in their opening couple of games.

Bruno Viana placed the visitors on the right track with a free hit at the back-post from a corner in the 22nd minute, just moments before Galeno doubled Braga’s lead with a driven strike into the bottom corner from the edge of the box.

Tondela continued to sink without trace before the hour-mark, going three goals down to Ricardo Horta’s close-range finish, courtesy of Galeno’s pull-back. In a merciless mood, Galeno’s header in the 43rd minute made it 4-0 in a goal-filled opening half.

The second period gave us more from the hosts, who could’ve even converted late on from the spot, but there was no luck in it for Salvador Agra and the northern outfit upon a penalty miss, presenting a heavy 4-0 defeat.

In Nicolas Otamendi’s debut, Benfica welcomed Farense to the Estádio da Luz with the knowledge that a victory would place them two points clear at the top of the table, ahead of second-placed Santa Clara.

With 15 minutes of play gone, the Eagles caught the newly-promoted side out on the counter before taking the lead via Pizzi, hitting the back of the net with a deflected effort.

Benfica took the one-goal advantage with them into half time before a penalty for Farense, tucked home on the rebound, had the hosts unsettled. Saved by a retake, Odisseas Vlachodimos was there to keep the second spot-kick out and preserve the score.

Farense's rub of the green was just around the corner, however, scoring from the subsequent corner in the 54th minute to cap off an exhilarating start to the second period in Lisbon, locked back up at 1-1.

It wasn’t until the 79th minute, after strong spells from the Faro outfit, that Benfica clawed back control through Seferovic, later doubling his account with a first-time finish inside the box for 3-1. Farense made it 3-2 a minute from time, courtesy of an Otamendi lapse in concentration, but the visitors would eventually run out of time in their search for a comeback.

With their pride hurt, following Thursday’s embarrassing home defeat to LASK Linz in the Europa League, losing 4-1, Sporting had plenty to rectify in Portimão ahead of their second game of the season, away to Portimonense.

Nuno Mendes handed the Lions the perfect start with a slalom-run and finish inside the box early on, just seven minutes before Nuno Santos doubled Sporting’s lead with a near-post header.

Portimonense weren’t to be muted in the second half, however, causing Sporting a fair bit of bother before Sebastian Coates, at the other end, saw a third goal disallowed for a foul.

Bruno Tabata, against his former club no less, had the opportunity to kill the game off in the final five minutes of the game before spurning his one-on-one opportunity, leaving us two count the efforts from 'the Two Nunos' as the difference-makers in a 2-0 victory for Rubén Amorim’s side.

Watched Porto vs Maritimo and to this hour I cannot understand what went on in that game in regards to the referee? Can anyone explain what happened? The penalty, extra 10 minutes, etc Please explain.......

Portuguese officials aren’t the greatest. I am not speaking as a fan of any team. They are equally as bad in any other match on any given day.

Nunogomes21
There are no comments posted here yet