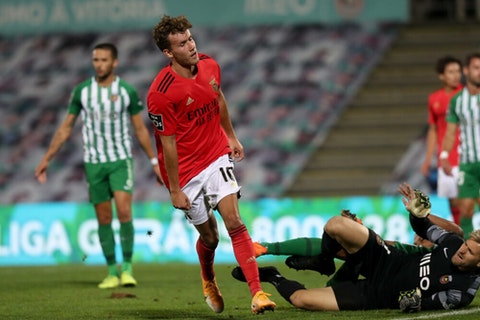 Braga’s turnaround continued as they beat Nacional, while the season’s first ‘Clássico’ saw Sporting and Porto share the points in an exciting 2-2 draw.

Title favourites Benfica took advantage of their rivals’ failure to win in extending their own lead at the top of the division. The Eagles’ 100% record continued in no small part due to the excellent form of PortuGOAL Figure of the Week Luca Waldschmidt, the German who is finding his feet in Portugal very quickly.

Waldschmidt was one of a number of high-profile big money signings by Benfica ahead of the new season, albeit arguably not as much of a household name as cohorts such as Jan Vertonghen and Éverton. Still, the German cost a fairly sizeable €15m from Bundesliga side Freiburg and was handed the number 10 shirt, so expectations upon the player have been pretty considerable.

Usually a tricky league to transition to, particularly having only played in his native Germany beforehand, but Waldschmidt has hit the ground running in already cementing his place in Jorge Jesus’ preferred starting XI. Playing just behind fellow new arrival, Uruguayan striker Darwin Núñez with whom he has already struck up an excellent understanding, Waldschmidt has seamlessly linked in with Benfica’s attacking style, and has looked like he has played alongside the likes of established stars Pizzi and Rafa Silva for many years already.

Against Rio Ave on Sunday night Benfica started positively and were off the mark as early as the 6th minute. Waldschmidt was the man in the right place at the right time, lurking unmarked in the penalty area to meet Éverton’s cutback and emphatically open the scoring.

In the 19th minute Waldschmidt and Darwin’s harmony continued as the German set up his strike partner for a tap-in after winning the ball well off Aderlan Santos, only for the goal to be correctly chalked off via VAR.

Around 10 minutes later good work from Darwin looked to repay the favour as Waldschmidt showed great composure to dance around Rio Ave recovering challenges to then finish past goalkeeper Pawel Kieszek, only for VAR to again intervene and call the German international narrowly offside.

Waldschmidt would finally get his second goal though in first half stoppage time. Darwin again the architect, his pass was cleverly left by Rafa to allow Waldschmidt all the time in the world to pick his spot and double the away side’s lead.

A quieter second half saw Darwin almost get the goal he deserved as he and Waldschmidt continued to link up effectively, before the equally-impressive Gabriel did indeed round off the scoring for a comfortable 3-0 victory.

It’s early days yet but Benfica are in ominous form already, their four wins from four giving them a five point lead already (albeit Sporting can reduce it to two with their game in hand), with only Farense really giving them a run for their money domestically so far.

The attacking options at Jesus’ display are an embarrassment of riches at this level and in particular the Waldschmidt-Darwin partnership already bearing fruit with 4 goals and 5 assists domestically between the pair. The Eagles want their title back and they will be very difficult to stop on current evidence.

Great performance, Benfica should already start looking for a replacement. Maybe Andre Silva will be affordable.

His value is listed at 26m dollars. Plus he keeps scoring and appears to be playing inspired football with Bas Dost as his partner up top.

4 goals and 2 assists in just 5 games this season.

His value is listed at 26m dollars. Plus he keeps scoring and appears to be playing inspired football with Bas Dost as his partner up top.

4 goals and 2 assists in just 5 games this season.

Dont see him leaving but who knows. If i was Frankfurt tho, lock that boy up! He is a gem.

I'm really impressed with our new striking duo thus far. I was really disappointed to see Carlos Vinicius get loaned out, and that may still turn out to be a bad move by the club....but Waldschmit and Darwin have certainly hit the ground running....

I'm really impressed with our new striking duo thus far. I was really disappointed to see Carlos Vinicius get loaned out, and that may still turn out to be a bad move by the club....but Waldschmit and Darwin have certainly hit the ground running.

Waldschmit seems the typically efficient and ruthless German forward (i.e Klose, Podolski, Muller)...who is just looking to put the ball in the back of the net at any opportunity. With Jorge Jesus' teams typically playing an all out attacking style and relying on efficiently putting away opportunities, the German could be a very important player for us this season.

As for Darwin, I've been highly impressed so far. No goals yet, but he's made up for that with 5 assists already. And boy does he work hard! Gives everything for 90 mins, doesn't stop working and running and giving the opposing defence a headache all match long. Once the goals arrive, we will have a real promising talent on our hands who could really grow and develop under Jesus.

Other new players like Everton and Verthongen have also impressed already, and on the whole I'm excited about our squad for this season...