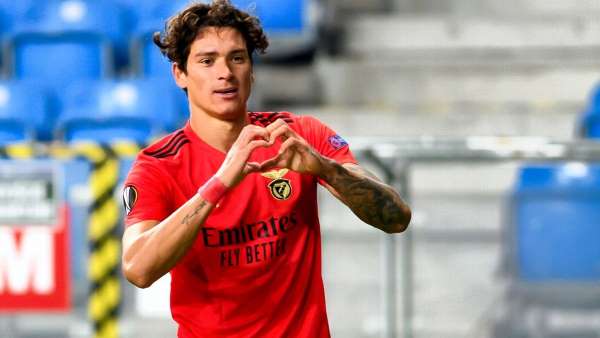 Portugal’s two representatives in the group stage of the Europa League got their campaigns off to a highly satisfactory start.

Benfica beat Lech Poznan 4-2 in Poland, with Uruguayan striker Darwin Núñez bagging a hat-trick, while at the Quarry birthday boy Wenderson Galeno was the star of the show in Braga’s 3-0 victory over AEK Athens.

The high-profile failure to successfully conclude the chase for superstar striker Edinson Cavani in the summer has proven a blessing in disguise for Benfica. Instead the Lisbon club bought Cavani’s young compatriot Darwin Núñez and the 21-year-old had impressed in Benfica’s perfect start to the Primeir Liga campaign, providing 5 assists in 4 consecutive victories. In Poland, the Uruguayan finally scored the goals his all-round play had merited, hitting a high-class hat-trick.

In a wide open and entertaining contest Benfica continued their strong form, making it five successive victories in all competitions, but the Portuguese team were suspect from the defensive point, with the enterprising and aggressive Poles creating chances throughout the 90 minutes.

However, the home side could not live with a Benfica attack that played with the dynamism and multi-faceted threats characteristic of Jorge Jesus’ teams. Pizzi put the Eagles ahead early on from the penalty spot, but Mikeal Ishak equalised soon afterwards from a rapid breakaway. Shortly before the break Darwin put Benfica into the lead again, rising majestically and sending a thumping header into the top corner of the net.

Once again the lead did not last long though, with Ishak restoring parity straight after half time, but on the hour mark Darwin showed strength and guile to run onto the ball inside the box, fool his marker with some neat footwork and coolly roll the ball into the net. A memorable night for the striker was completed with a close-range header.

“I’m happy to have helped the team with three goals. We’ve started the competition well, now we have to keep going like this,” said Darwin.

Asked about his lack of goals thus far: “I was calm. Obviously, a forward lives for goals, but when you don’t score you have to keep a cool head and help the team, and keep working hard. It was time to score, today I did, and two more goals came along straight away. I dedicate these goals to André Almeida [who suffered an ACL injury last week].” 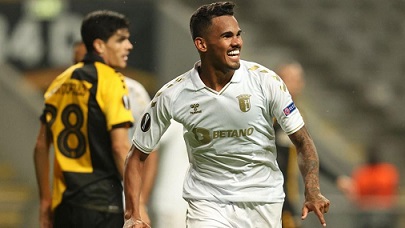 In a match played in front of 2,500 fans, Braga having been given permission to allow that number of supporters into the stadium by the Portuguese health authorities, the home team outclassed Greek outfit AEK Athens.

Brazilian winger Wenderson Galeno celebrated his 23rd birthday in style with a Man-of-the-Match display. The former Porto player opened the scoring just before half time with a fine header.

Both teams had chances to score, with Braga fashioning the better and more numerous chances, but the hosts had to wait until the final minutes to make the game safe. A wonderful dribble and perfect pass by Galeno in the 78th minute paved the way for Paulinho to double Braga’s lead with a well-placed low shot into the corner of the net. Paulinho then turned provider, setting up Ricardo Horta for another clinical finish.

“It was a convincing victory, with a great performance like our latest matches,” said delighted coach Carlos Carvalhal. “We played a very powerful game, showing very good capacity to apply pressure, reacting well to losing the ball and having an excellent balance that allowed us to control the game.

“The result was fixed in the final minutes, but the number of chances we created justified a wider score-line earlier. I’m very happy and above all have to praise the attitude and behaviour of the players to put the game plan into action very well.”