Boavista rock Benfica to leave Sporting top of the table, as FC Porto lose once more 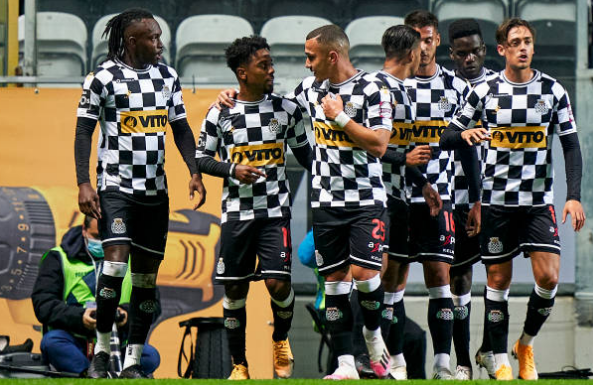 Sporting are the new leaders of the Primeira Liga after their 4-0 victory over Tondela was followed up with a shock 3-0 win for Boavista at home to Benfica, this Monday.

The Lions starred in the Portuguese capital courtesy of a Pedro Gonçalves brace. The Sporting win was sandwiched by FC Porto’s surprise 3-2 loss to Paços Ferreira, opening a six-point-gap between the two sides, and the Benfica loss, with a previously winless Boavista claiming their first set of three points of the season.

Elsewhere, Sporting de Braga secured a nervy win at home to ten-man FC Famalicão, also on Monday night, to jump up to third.

With Sporting top of the league for the first time in years, and Braga also starting the season strongly, there is hope that the 2020/21 Primeira Liga will see an exciting title race not confined to just Benfica and Porto as in recent years. Picking a champion right now is no easy task, but placing a correct bet at sbobet could bring rich dividends. Here’s the peak of the Week Six action.

After a much-needed triumph at home to a Pedro Martins-led Olympiakos in the UEFA Champions League, Porto travelled to the Mata Real in search of their first domestic victory since the end of September.

Things quickly turned pear-shaped for Sérgio Conceição’s team, however, after Dor Juan took advantage of a Jesús Corona intervention, placing him one-on-one with the keeper and making it 1-0 in the 11th minute at the second time of asking.

Sérgio Oliveira came close to issuing a reply with a free-kick aimed at the outside of the post before Paços had a second goal controversially ruled out in the 39th minute for an apparent foul on Chancel Mbemba.

Stephen Eustáquio, assisted by Hélder Ferreira’s cut-back, reinstated a two-goal advantage in the 43rd minute before a Sérgio Oliveira penalty, already on the stroke of half-time, took the two sides into the interval with a 2-1 scoreline.

From the same penalty spot, Bruno Costa, now in the yellow of the ‘Castores,’ made it 3-1 against his former club in the 59th minute before Eustáquio came close to giving Paços an even bigger margin of error, as his volley thundered off the underside of the crossbar and clear.

Otávio provided a scenic effort at the other end with a strike nestling into the top corner in the 77th minute, reducing Paços’ advantage to 3-2, but Porto would find no way through en route to a second successive league loss.

Following Porto’s downfall on Friday night, and with Benfica only due to play a day later, Sporting not only had the chance to increase their advantage over Porto but also take top-spot for themselves, at least for a day, as they welcomed an uninspired Tondela, form-wise, to the Alvalade.

The Lions asserted their dominance throughout and it would’ve shown on the score-line sooner had it not been for an imperious-looking Pedro Trigueira between the sticks, keeping Pedro Gonçalves out on a couple of occasions.

Just before the break, Pedro Gonçalves found a way through after heading in Pedro Porro’s cross, and the goalscorer was on hand to provide the hosts with the finishing touch soon after the interval too from Andraž Sporar’s pass, making it 2-0.

Trigueira continued to turn in a performance for the ages for Tondela but would have little chance of stopping Porro from clinching his first goal for Sporting in the 79th minute, guiding in Nuno Santos’ cross expertly on the volley.

The final act was reserved for Sporar, a minute away from the final whistle, as Sporting ran out 4-0 winners in comfortable fashion.

With things beginning to look rosey Carlos Carvalhal and his Braga team, a further victory, this time at home to Famalicão, would enable the Arsenalistas to leapfrog Porto in third place.

Standing strong and protecting his former side was Vaná, keeping Braga out on a number of occasions, meanwhile Matheus was brought into action sparingly at the other end in a tense first-half of football.

Riccieli’s dismissal promised to add some spice into the affair in the 68th minute, tugging back Paulinho inside the box and conceding a penalty, but, again, Vaná was on hand to deny Braga following Iuri Medeiros’ miss.

The hosts finally had the ball in the back of the net ten minutes later through a Bruno Viana tap-in but were made to suffer in the wait for VAR’s confirmation, eventually given in the 74th minute.

Viana’s goal was all that stood between Braga and ten-man-Famalicão come full-time, taking the victors two points clear of fourth-placed Porto.

Plenty of intrigue surrounded Boavista and their eventful transfer activity but, five games in, the ‘Panteras Negras’ remained just one of two sides yet to taste victory in this early start to the Primeira Liga campaign, as they welcomed Benfica to the Bessa.

After Darwin Nuñez’s disallowed goal, Boavista may well have been thinking their luck was about to change after Angel Gomes won his side a penalty in the 17th minute, taking the chance to convert himself against Benfica and placing his side 1-0 up.

A greater amount of discipline was required of Vasco Seabra’s men in the second half, as Jorge Jesus risked it all with his substitutions, leaving Benfica susceptible to Paulinho’s counter in the 76th minute, finished on the edge of the box by Yanis Hamache.

From Yusupha Njie, Boavista could've even found a fourth late on, as Darwin also neared a consolation goal for the Eagles in the final minute, concluding a massive victory for the northern outfit.

I watched Benfica from 30 mins onwards and well, first half says it all really 10 shots to 1 shot... now you're thinking its Benfica that has 10 shots surely? oh no it was the opposite, Benfica were lucky not to get smashed that game, the 3rd...

I watched Benfica from 30 mins onwards and well, first half says it all really 10 shots to 1 shot... now you're thinking its Benfica that has 10 shots surely? oh no it was the opposite, Benfica were lucky not to get smashed that game, the 3rd goal was appalling and I don't even support Benfica their defense made no pressure. This defeats certainly brings them back to earth. Could also be a good defeat for them to shock them back into a more dangerous side.

I didn't watch Porto but I'm not surprised Porto are dropping points and what a surprise that knobheaded Sergio is complaining about the referee when they got gifted a non existent penalty and were given another life line by chalking off a perfectly legit goal against them and they STILL lost haha couldn't happen to a nicer manager, no class that man has. Really is a classless man. I want Porto to succeed in the Champions League but I don't want them to at the same time because of that guy.

I watched Sporting and before I get happy I understand we played a very poor side that game, 4-0? could have easy been double digits, only thing I didn't like was it was only 1-0 at the end of the first half and it took us a little too long to make it 3-0 with all the chances we had, ok their goalkeeper was having a almost near perfect game so credit to him for keeping the score line respectful and that's saying something when it still ends in 4-0. I'm happy with how the team is playing, perhaps the defense needs more work when we come across better attacking sides. Pedro Goncalves is looking like a gem really impressed so far hopefully he can eventually take over the position left over by Bruno Fernandes.

I fully expect Porto to drop more points, Braga don't worry me as long as they are still in Europa, Benfica looked strong until today so it shows the rest of the teams that Benfica are certainly beatable. I do expect Sporting to drop points too but hopefully its only against the bigger teams and not needlessly against smaller teams as we know the league for the last few years haven't been decided on the bigger teams beating each other but dropping points against the smaller ones.

I remember I said Sporting would compete for the title and someone laughed at me.
Yes it’s still early in the season but Sporting has interesting squad, good tactics , and no European football to distract them from the task at hand.

I remember I said Sporting would compete for the title and someone laughed at me.
Yes it’s still early in the season but Sporting has interesting squad, good tactics , and no European football to distract them from the task at hand.

Also not having fans in the stadium brings less pressure to the young players. They can focus more on their game.

Benfica was owned by BFC and they are now blaming referees.

Sporting will notoriously choke as usual.