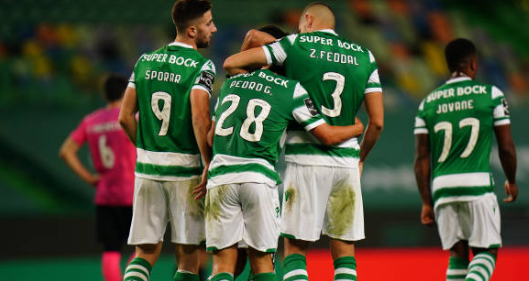 Benfica became the fourth member of the Primeira Liga’s top four to claim victory this weekend, after returning to winning ways in a 2-1 victory away to Marítimo.

Sporting readjusted their grip of first place after coming back from a goal down against Moreirense to win 2-1, shortly after FC Porto had done their bit away to Santa Clara, courtesy of Luis Diaz’s sole goal.

Just one strike was enough to hand Sporting de Braga all three points too against Farense on Sunday night, prior to Benfica wrapping up the week’s action, coming from behind in Madeira to complete a quartet of single-goal victories.

An excellent showing in Europe has left FC Porto within touching distance of progressing out of their UEFA Champions League group, but the picture back at home appears more delicate, sitting in fourth place, six points from the top of the table.

A half of few opportunities was rescued by an acrobatic finish from Diaz, giving Porto the lead on the brink of half-time following Wilson Manafá’s pulled-back cross.

Otávio came the closest in the second period to adding to the story of the game, volleying just over from the edge of the box in the 87th minute.

In the 90th minute, it was Sérgio Oliveira’s turn to induce belief in a goal, attempting to replicate the efforts of Diaz before delivering a tame effort on target, giving Porto a 1-0 victory on a night of few thrills.

In César Peixoto’s first big day out as Moreirense manager, Sporting were out to resume their positive start to the new season, eyeing up their seventh victory in eight Primeira Liga games.

A fast start had the league leaders working from a one-goal deficit, as Luis Neto introduced the ball into his own goal to give the boys from Moreira de Cónegos a shock lead.

Sporting’s reply came just five minutes later, as Pedro Gonçalves, with plenty of determination and luck in between, managed to scupper the ball into the back of the net from a Nuno Santos cross in the 8th minute.

Only the crossbar stood between Andraž Sporar and the turnaround in the 22nd minute - a sentiment shared with Pedro Gonçalves after his wondrous effort, seemingly curling and dipping into the back of the net, pinged off the frame of the goal too, deep in the second half.

There would be no stopping the ex-Famalicão man in the 75th minute, however, squeezing a strike under the goalkeeper and securing all three points for the Lions in a 2-1 home victory.

Just days after being denied by a late Jamie Vardy strike in a 3-3 home draw with Leicester City, last Thursday, Braga were in action again as early as the following Sunday, welcoming newly-promoted Farense to the Estádio Municipal.

Brian Mansilla put the visitors in front midway through the first half before VAR’s review chalked the effort off for offside, in a period largely detailed by Braga shots at goal.

Iuri Medeiros came close to making one of those efforts count in the 53rd minute, hitting the post before Ricardo Horta also neared the opener with a close-range shot at goal, stopped by the keeper.

The Arsenalistas’ defining moment came from the unlikeliest of sources as the ball left itself spare for Ali Musrati to strike inside the box, with the Libya international finding the back of the net.

Braga’s 1-0 win sees them move back up to second place, four points off table-toppers Sporting.

Winless in their last two Primeira Liga outings, Benfica could hardly afford a third stumble in the league, taking on a Marítimo side desperate for points near the bottom of the table.

Via a Nicolas Otamendi mistake, Rodrigo Pinho was on hand to pounce on the Argentine’s short back-pass to ring the alarm bells in the 14th minute, dinking the ball past Odisseas Vlachodimos.

Pizzi was on hand to pull a goal back from Alex Grimaldo’s pass, however, as Jorge Jesus’ men took to the break with the game level at 1-1.

From Benfica’s left-hand side, the Eagles found further joy in the 72nd minute after Everton Cebolinha worked his way inside before slotting the ball into the bottom corner. The former Grêmio winger’s goal stood between the two outfits come full-time, securing Benfica in third place and Marítimo in the bottom two.

Otamendi is a disaster. Drop him now and play Jardel or Ferro instead. On his first game, he made a silly error letting the opponent to score a goal. Because of his red card against Rangers in the Europa League, Benfica were made to suffer from...

Otamendi is a disaster. Drop him now and play Jardel or Ferro instead. On his first game, he made a silly error letting the opponent to score a goal. Because of his red card against Rangers in the Europa League, Benfica were made to suffer from their one goal lead. And now this pathetic backpass. I've had enough of him and his errors. He was a liability for Man City and now a liability for Benfica. It baffles me why Benfica shed out €15m for him in the first place.

@Dhazer... I couldn't agree more regarding Otamendi. It is absolutely crucial he gets dropped to the bench with immediate effect. The number of individual errors from him, which are directly costing us goals and points, is simply pathetic now....

@Dhazer... I couldn't agree more regarding Otamendi. It is absolutely crucial he gets dropped to the bench with immediate effect. The number of individual errors from him, which are directly costing us goals and points, is simply pathetic now. There's even a joke going around on Portuguese football sites that maybe Otamendi is a double agent working for his former club Porto, and costing us points on purpose lol! Jokes aside, he needs to be dropped immediately, because he will clearly be making the rest of the defence nervous, and that is unacceptable.

Not to even mention Ferro and Jardel...at the moment I'd even prefer to see either of our DMs Samaris or Weigl play centre back ahead of Otamendi! And I really hope that in the light of yet another individual error from the Argentine last night, that the club make sure they guarantee the signing of Lucas Verissimo in January. We badly need a solid CB to partner Verthongen in the central defence.