Benfica leave it late and close in on first-placed Sporting 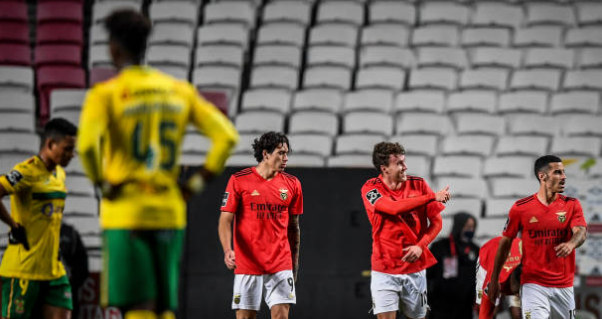 Benfica have moved within touching distance of first-placed Sporting after a late Gian-Luca Waldschmidt goal secured a hard-earned 2-1 victory at home to Paços Ferreira, this Sunday.

The Lions succumbed to their second draw of the season in a tempestuous 2-2 affair with Famalicão, marked by Sebastian Coates’ controversially-disallowed goal in the final moments of the game.

Sporting’s draw meant that Benfica could halve the initial four-point-gap with a victory against Paços, secured in stoppage time by Waldschmidt. FC Porto also received the 2-2 draw with grace, producing a seven-goal-thriller at home to Tondela with a 4-3 win, headlined by a Moussa Marega brace.

Sporting de Braga, however, would be less fortunate, losing 2-1 away to Belenenses and falling five points behind the leaders of the pack. PortuGOAL has more from Matchday 9.

A fresh test for Pedro Gonçalves and Sporting, who’d have to overcome the playmaker’s former club, away from home, to resume the kind of form that’s placed the Lisbon club at the top of the table.

Gonçalves would take just 37 minutes to produce the kind of goods that's attracted so much buzz to his name as of late, placing his 10th league goal of the season neatly into the bottom corner shortly after Nuno Santos had missed the chance to stick Sporting ahead from the penalty spot.

Famalicão issued a response through Gustavo Assunção’s equaliser in the 43rd minute, but the hype was hijacked by Pedro Porro on the brink of half-time, as his dipping free-kick propelled the Green & Whites back in front.

A more complex second period for the visitors was made worse by Pote’s dismissal in the 80th minute, paving the way for Famalicão’s eventual equaliser in the 89th minute via a Jhonata Robert set-piece.

With Coates up top, Sporting thought they had clinched the winner late on before VAR intervened to rule out the Uruguayan’s goal for a foul on the keeper, maintaining a 2-2 draw between the two sides.

Following Sporting’s blip in Famalicão, Porto had the chance to close the gap between them and the top of the table back down to four points, as Tondela came to town.

Zaidu Sanusi provided Sérgio Conceição’s men with the perfect start, scoring in the 4th minute, which should then have been backed up by a quick-fire double, wasted by Marega a minute later in an open-goal miss.

Tondela made the Dragons pay in the 22nd minute through Mario Gonzalez before ex-Sporting man Rafael Barbosa, some ten minutes later, turned the game on its head to place the away side ahead with a tap-in.

Marega made amends with an equaliser in the 36th minute before turning the game back in the hosts' favour three minutes into the second period.

Summer signing Mehdi Taremi added greater comfort to Porto’s lead, making it 4-2 with a volley inside the area, but Gonzalez reapplied the pressure from Tondela’s end with his second goal of the night.

The Primeira Liga holders’ lap got hot under the collar following Matheus Uribe’s second yellow card and a final Tondela effort to make it 4-4 crashing against the bar, but the Dragons would carry enough fortune to shake off the late scare.

Much like Porto, Benfica were out to close in on Sporting’s despair and shorten their bitter rival’s lead to just two points, welcoming Paços de Ferreira to the Estádio da Luz on Sunday night.

Following an exchange of early blows, Oleg was the first to make one count with a spectacular volley, taking aim from the edge of the box to place Paços a goal up in the 24th minute and increase the pressure on the hosts, who continued to accumulate efforts on goal.

Rafa Silva finally made one stick in the 58th minute, having initiated the move that was eventually supplied by Gilberto’s low cross and finished by the ex-Braga man himself, equalising for Jorge Jesus’ side.

Darwin Nuñez edged Benfica closer to the turnaround with a long-range effort skipping off the top of the crossbar in the 72nd minute, but just as it seemed as though the Eagles wouldn’t find a way through, a hopeful ball into the box from Gabriel was met by Waldschmidt’s head for a 92nd minute winner, securing a 2-1 home win.

Not one to sleep on an early title charge, Braga too were licking their lips at Sporting’s slip-up away to Famalicão ahead of their journey to the Jamor, with Belenenses awaiting the Arsenalistas.

The hosts left their mark on the game in the 33rd minute through Miguel Cardoso, narrowly beating the offside trap to hook a volley into the bottom corner with a sole touch.

Things got even better for Belenenses after ex-Porto youngster Afonso Sousa doubled their lead ahead of the interval, taking on Bruno Viana and cutting inside before finding the top corner with a curling effort.

Be it by luck, or design, Braga struggled to find away past the on-song André Moreira in goal, requiring a 70th minute Paulinho penalty to claw a goal back, but little else followed for Carlos Carvalhal’s men in their third league defeat of the season.

Sporting robbed at the end, if I were Ruben Amorim I would have walked on the pitch and slapped the referee.

Sporting had chances to make it 3-1 before Pedro Goncalves got rightfully sent off but we didn't lose the game because of him it was...

Sporting robbed at the end, if I were Ruben Amorim I would have walked on the pitch and slapped the referee.

Sporting had chances to make it 3-1 before Pedro Goncalves got rightfully sent off but we didn't lose the game because of him it was the referee that stole the victory from us.

That Refereeing in the Sporting game was crooked. Straight out of an old
School WWF wrestling match such as the infamous “Montreal Screwjob” when McMahon and Shawn Michaels colluded with the ref to screw Bret the Hitman Hart. Only in Portuguese...

That Refereeing in the Sporting game was crooked. Straight out of an old
School WWF wrestling match such as the infamous “Montreal Screwjob” when McMahon and Shawn Michaels colluded with the ref to screw Bret the Hitman Hart. Only in Portuguese liga does this happen.

With that being said, I am still proud of Sportings spirit in that game as they deserved to win and showed garra. They will no doubt continue to fight and maybe this injustice will motivate the squad. You can see how motivated they are and how much unity there is in the group after the game.