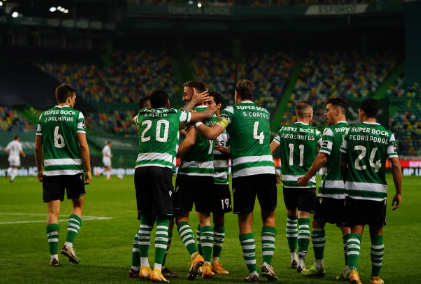 Sporting have held onto top spot going into Christmas after a late Andraž Sporar penalty secured a 1-0 victory against Farense in a week of wins for Portugal’s Big Three.

Following a controversially-earned set of three points in the Portuguese capital by Sporting, Benfica reciprocated in Barcelos in a 2-0 triumph away to ten-man Gil Vicente, restoring the two-point-gap between the two rivals.

FC Porto kept their part of the chase up too on Sunday night, also winning 2-0 at home to Nacional, completing the podium after a round of Matchday 10 fixtures. PortuGoal has more on this weekend’s action.

After the sour taste left from their 2-2 draw away to Famalicão, the Green and Whites were out to get back on winning terms, welcoming newly-promoted Farense, the Lions from Faro, to the Alvalade.

The duel proved to a toothless and timid affair, however, with only a couple of Ryan Gauld attempts against his former club standing out in a goalless half.

Sporting’s struggles continued right up until the 85th minute, stumbling upon a penalty courtesy of Rafael Defendi’s charge into Zouhair Feddal in the air, leaving Farense without their number one goalkeeper.

Sporar stepped up to the spot and made not mistake in sending the goalkeeper the wrong way, sneaking a win for Rubén Amorim’s men in the 90th minute.

Becoming the first of the ‘Big Three’ to play at the Cidade de Barcelos Stadium, this season, Benfica only had eyes for a victory that would take them back within two points of league-leaders Sporting.

The Eagles, much like their rivals the night before, encountered first-half struggles of their own before a raised arm by Nogueira, striking Darwin Nuñez, left Gil Vicente going into the break down to 10 men.

Benfica dragged those difficulties into the second period, where a top save from Odisseas Vlachodimos and the top of the crossbar denied two separate headers from Lucas Mineiro from breaking the deadlock before the hour-mark.

Instead, it was the misfortunes of Gil Vicente’s Rodrigo Prado that had the net in motion, diverting Everton Cebolinha’s tame nod into his own net in the 59th minute.

Lourency almost clawed a goal back prior to Alex Grimaldo’s heroics, blocking a tap-in into an empty net, setting up the a killer blow for the hosts from another Everton header - this one going straight in at the back-post to secure a 2-0 victory in the 65th minute.

In their bid to match both Sporting’s and Benfica’s result, Porto anticipated and demanded joy at home to another of this season’s promoted teams - Nacional da Madeira. The Dragons settled into their groove a little sooner, however, earning a penalty as early as the 20th minute that was promptly converted by Sérgio Oliveira for 1-0.

After winning the penalty, Mehdi Taremi played the role of the architect once again when taking advantage of a loose ball in the final third to thread Moussa Marega through, as the latter stabbed home the second goal of the night before the break.

The score-line made for a more relaxed iteration of Sérgio Conceição’s men in the second period, coasting to a 2-0 victory ahead of Wednesday night's Super Cup date versus Benfica.