Porto, Sporting and Benfica made to work as Braga star in final 2020 outing 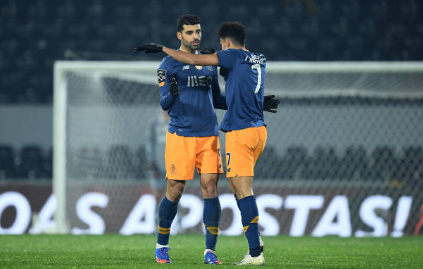 FC Porto have joined the Primeira Liga top three in victory after twice coming from behind to defeat Vitória de Guimarães 3-2 away from home in the final game of 2020.

A 2-1 win away from home against Belenenses saw Sporting lead the way on Matchday 11, earning them the right to pass over into the new year at the top of the Primeira Liga table.

Their rivals, Benfica, followed the Lions’ path with a 2-1 win of their own on Tuesday night against Portimonense, as Sporting de Braga starred away to Boavista inflicting a 4-1 on the home side in their bid to hold onto third place.

Courtesy of a Mehdi Taremi brace and Luis Diaz clutch winner, Porto stole third place for themselves, as well as all three points at the Dom Afonso Henriques, winning 3-2 against Vitória on Wednesday night. PortuGOAL has more from the final set of fixtures of a turbulent 2020.

In a game between two of the most iconic Lisbon sides, Sporting, away at the Jamor were out to continue the fine form that’s led them to the top of the Primeira Liga table in recent weeks.

Just five minutes in, Tiago Tomás had the Green & Whites in front after receiving Rodrigo Tabata’s pass and striking on the turn inside the box, finding the bottom-left corner with his weaker foot.

Belenenses replied in good time after Miguel Cardoso, from a deflection, found a way past Antonio Adan to equalise in the 13th minute. The hosts’ goalscorer could’ve made it 2-1 from the spot after being taken out by the Sporting keeper in the box, but it was the latter who came out on top from the 12-yard-mark.

Soon enough, it was the visitors’ turn to appeal for a penalty of their own after Tiago Tomás was brought down, benefitting from greater fortune from the spot-kick and retaking the lead through João Mário in the 24th minute.

Cardoso’s struggles up against Adan continued through to the interval, enabling Sporting to hold onto their 2-1 lead. A second-half red card for Tomás Ribeiro facilitated the league-leaders’ route to victory, claiming another crucial set of three points.

There was a big showdown at the Bessa for the recently-appointed Jesualdo Ferreira to get stuck into, against his former side, Braga, keen to call time on 2020 deep within the top three.

Three minutes in, the Arsenalistas were up and running through Paulinho’s tap-in, paving way for a far more remarkable second goal, supplemented by Iuri Medeiros, who found the top corner from range in the 15th minute.

Ricardo Horta, with ice in his veins, was capable of evading the Boavista offside trap and lobbing the goalkeeper for Braga’s third goal of the night in the 26th minute.

Devenish clawed a goal back for the hosts in the second half, following two disallowed goals at the other end, but Braga’s fourth and final goal would eventually arrive with Horta picking his spot in the 69th minute, finalising a 4-1 win.

For the Eagles’ final date of the year, bottom-of-the-table Portimonense were welcomed to the Estádio da Luz in somewhat of a must-win game for both, in a desperate and constant search for points.

Advantage fell Benfica’s way after Rafa Silva set Darwin Nuñez in the 13th minute for a simple tap-in, bringing to an end a drought of six games without a goal for the highly-rated Uruguayan striker.

Rafa took all the glory for himself in the 23rd minute, working an inch and finding the back of the net with a well-placed finish that doubled the lead for Jorge Jesus’ men. Nuñez edged Benfica closer to a third goal in the 56th minute after his side-footed strike kissed the post, in an otherwise quieter half for the hosts.

Deep into stoppage time, the hosts had a late Gilberto own goal to contend with, halving their advantage in the 92nd minute, but it wouldn’t be enough to topple over the three points eventually in their possession.

Closing out the year in style, the fixture machine lined placed Vitória up against Porto in the final game of 2020, in a match-up with the potential to see the hosts catch up the league champions in fourth place, points-wise.

With just seven minutes on the clock, a Matheus Uribe stray pass landed the Dragons in all kinds of problems, as Rochinha’s run and deflected strike placed Vitória a goal up early.

Porto’s threat-level grew as the half went on, nearing a 40th minute equaliser via Luis Diaz prior to Taremi’s tap-in from Moussa Marega’s weighted lay-off on the brink of half-time.

Ricardo Quaresma was on hand to undo all that in the 63rd minute, setting up Oscar Estupiñan for a diving header on his 24th birthday, propelling Vitória back in front of the clash.

Taremi equalised almost immediately with a first-time finish before Díaz, in the 80th minute, turned the game on its head with a clean control and toe-poked finish inside the box.

Left without response, the Colombian's late and decisive strike pushed Porto back up to third in the league table with a 3-2 win, a point ahead of fourth-placed Braga and two away from Benfica in second.

Hopefully Diogo Leite keeps his spot in the starting 11. He’d be an excellent partner for Dias on the national team.

I like Leite a lot. He's young and has a huge upside. I'm surprised Conceicao has been giving him chances, but happy he has done so.

Leite still does not have enough experience and Mbemba has been doing an excellent job so far, so I don't know...

I like Leite a lot. He's young and has a huge upside. I'm surprised Conceicao has been giving him chances, but happy he has done so.

Leite still does not have enough experience and Mbemba has been doing an excellent job so far, so I don't know how regular Leite will be.