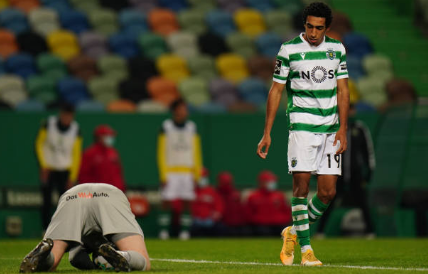 Sporting de Braga have missed out on the chance to close in on the top three after a Friday of draws for Sporting, Benfica and FC Porto, losing 2-0 instead to Paços de Ferreira, this Saturday.

Sporting were the first to drop points in a 1-1 draw at the Alvalade prior to an identical result in the Clássico between Porto and Benfica.

The results opened up an avenue for Braga to get closer to their competitive rivals, but the struggles extended themselves to Carlos Carvalhal’s men too, losing 2-0 away to Paços.

With a pending Clássico looming over the action at the Alvalade, Friday night served up the opportunity for Sporting to increase their points’ advantage over Benfica or Porto, if not, both.

In the first period, few were the times that the Lions troubled a Rio Ave side desperate to find their feet but, with five minutes of the first half to go, Pedro Gonçalves was on hand to provide the goods for the hosts, finishing off Gonzalo Plata’s low cross.

The Vilacondenses replied with a goal ‘Made in Sporting’ in the 61st minute, opened up by a Francisco Geraldes through ball to Carlos Mané and tapped into an empty net by Gelson Dala, following the winger’s pass across goal.

Heroics at the back from Aderllan Santos and co. kept the Green & Whites from biting back, subsequently taking crucial points off the hosts in their fight for the Primeira Liga title.

Draws across the board throughout the top three meant that Braga could make positive leaps in their hunt for a podium finish, needing a win against Paços, on the Arsenalistas’ tail themselves in fifth, to come within two points of both FC Porto and Benfica.

The two sides traded a handful of dangerous headers, supplied by Ricardo Esgaio and Marco Baixinho, as both outfits drifted into the break locked at 0-0.

Ex-Porto and Portimonense midfielder Bruno Costa changed all that in the 57th minute, cutting in on his right foot before find the back of the net with a strike going in off the far post.

Ricardo Horta was gifted with the perfect opportunity to fire Braga back into the contest in the 68th minute, receiving Esgaio’s pull-back in a prime position before blazing it over.

In response, Hélder Ferreira killed the game off just eight minutes later with a second for the Castores, taking advantage of the commotion caused by Baixinho’s header onto the bar to scramble in a decisive second goal.

The winger’s goal secured a 2-0 victory, on top of a handy set of three points for Pepa’s side, who are now just two points behind fourth-placed Braga.

The league and media seem to push Braga as being the 4th contender. Pacos has been doing great and they have been a consistent club for a while now.

Braga still hasn’t won a league title, Boavista did back in 2001.

You want to compare a team that is always in the top 4, sometimes the top 3, (not to mention they are regular fixtures in Europe), to Pacos de Ferreira?

You want to compare a team that is always in the top 4, sometimes the top 3, (not to mention they are regular fixtures in Europe), to Pacos de Ferreira?

Pacos de Ferreira were in the 2nd division as recently as the 2018-19 season. There is no comparison. I like Pacos, the way they play and how they can fight in any game, as well as their pitch. But Braga is elite level in the league, they have made it a Top 4 discussion.

This is like saying West Ham are EPL contenders and Tottenham are not. There is no comparison.

Braga has yet to win a title. Third and fourth doesn't count. Z, you're exact. A much deserved round of applause to Pacos and all of the others who serve as doormats for the big THREE!

Braga has been good lately no doubt, but I find the media pushes them hard as the...

Braga has been good lately no doubt, but I find the media pushes them hard as the supposed 4th grande when they do not deserve that accolade. Boavista was competing for the league in the late 90s and early 00s and actually won the league. Bragas biggest achievements are reaching the Europa league final in 2011, a second place finish in 2010, and winning the taca de Portugal recently. Other than that clubs such as pacos, guimaraes, or Rio Ave have often done quite well.

No doubt Belenenses and Boavista are in the history books for also winning the league, but if you consider Sporting a "grande" despite their lack of a title for 20 years (and I do by the way), then you have to pay Braga the same respect.

No doubt Belenenses and Boavista are in the history books for also winning the league, but if you consider Sporting a "grande" despite their lack of a title for 20 years (and I do by the way), then you have to pay Braga the same respect.

Braga have arguably been a more consistent force in Europe than Sporting and have essentially equaled them domestically with runners up or top 3 finishes and several Taca's.

Pacos, again, a very decent club, is much smaller and has done very little compared to Braga. Frankly, I find it a bizarre comparison, though I do agree that other Portugese clubs should get a little bit of the rub.

Guimaraes for their fans and how competitive they are, Famalicao for the project they initiated last season, Portimonense for their good run in the last few years are other examples.

But none of them, including Pacos, have jumped to the top level of the league the way Braga has. Media hype or not, they have done well for themselves. And if you've never gone to the Estadio Municipal de Braga, you are doing yourself a disservice, it is a special pitch.

I started following football and Portuguese football in the mid 1990s when I was a kid. The chosen team was SCP and it remains that way.

As a student of life including history, I can tell you that the “4th team” in Portugal has often switched...

I started following football and Portuguese football in the mid 1990s when I was a kid. The chosen team was SCP and it remains that way.

As a student of life including history, I can tell you that the “4th team” in Portugal has often switched hands. At one time it was Belenenses. Then it became Vitoria de Setubal who won multiple Tacas and I believe had a second place finish in the league during the 1970s. It then became Boavista who won multiple tacas since the 1970s, which lead to challenging for the league title in the late 90s and early 00s. They competing against strong teams like Bayern in the champions league . They won the league in 2001.

Braga has won two Tacas de Portugal (one was way back in 1966 before they were considered a threat to the big 3). They reached the Europa league final in 2011. They finished second in 2009/10 but were never a serious threat to win . They haven’t done enough and in a few years don’t be surprised if Guimaraes, Famalicao , of Boavista become the 4th team.

What will not change ? Sporting being grande. Even if we haven’t won a league in 19 years, and had a 18 year drought not long before that, we are hated by large sections of the media and fans. This is all despite our lack of success . That is when you know you are grande. When players such as CR7, Figo, Futre, Quaresma,
Moutinho, William, Bruno fernandes, donned the green and white you know the fact is we are the pride of Portugal.

Porto fans can put on their Taremi jersey and dive in the swimming pool. Benfica fans are mostly drunks pouring concrete at 6 am.