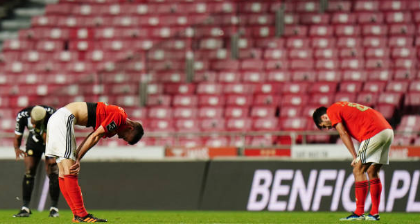 Corona-struck Benfica have fallen two points behind second-placed FC Porto after drawing 1-1 against Nacional da Madeira without a handful of their first-team players.

The Eagles took the lead early at the Estádio da Luz before Bryan Rochez’s equaliser set Jorge Jesus’ men up for another Primeira Liga slip-up, prior to Porto’s trip to Faro on Monday.

Farense weren’t able to do Benfica a favour, despite their best efforts against the Dragons, losing 1-0 at home to a 15th-minute Mehdi Taremi goal.

Table-topping Sporting were in action the following day, sitting comfortably in first after a 2-0 victory away from home against Boavista. Meanwhile Sporting de Braga reasserted themselves in fourth with a 1-0 win versus Gil Vicente.

With a number of players out of action after testing positive for Covid-19, Benfica took to the stage against Nacional on Monday night, despite their best efforts to reschedule the fixture.

The hosts looked to step up to the task regardless, opening the scoring through Chiquinho’s back-post header after the playmaker had already seen one of his strikes ruled out for offside.

Nacional needed just a couple of minutes to bite back in the second half, as Rochez’s diving header from close range issued the worries for ‘the Red & Whites’.

The closest Benfica came to swinging the balance back in their favour was in the 83rd minute, with bodies being put on the line to deny Haris Seferovic from getting a shot off as both teams secured a point apiece.

The Dragons were gifted the opportunity to go two points ahead of Benfica, trailing Sporting alone in second place, but would need to defeat Farense first to take advantage of their rival’s slip-up.

Taremi set Porto’s plan in motion with the opener on the quarter-of-an-hour mark, squeezing in his effort after a marauding run from Wilson Manafá down the right flank.

Sérgio Conceição’s men offered more danger through Jesús Corona and Otávio prior to the interval, seeing both efforts saved by Rafael Defendi, keen to make amends for the earlier goal conceded.

Defendi continued to keep Farense in the game in the second half, again denying Otávio in the 60th minute before the hosts began to grow into the encounter. Porto had a ball against the woodwork and a shot fizzing just past Augustin Marchesin’s goal to stomach, ultimately weathering the storm en route to a crucial 1-0 victory.

Fresh from their Allianz League Cup triumph over Braga, Sporting were out to inflict further pain upon another northern outfit in their away-day at the Bessa, versus Boavista.

The Lions took the lead after a lengthy verification from the VAR in the 22nd minute, confirming Nuno Santos’ opener inside the area as onside after being spotted by Nuno Mendes’ low cross.

João Mário should’ve made it 2-0 in the 42nd minute after receiving Andraž Sporar’s knockdown and taking Adil Rami out of the way with his first touch, deep in Boavista’s box, but the midfielder was unable to pick his spot with his left foot, as Léo Jardim accumulated the saves.

Sporting resumed their search for a more comfortable scoreline in the second period, coming within inches of making it 2-0 after Sporar, completely free at the back-post, failed to get enough contact behind his efforts to tap in Nuno Santos’ fizzed cross.

It took a huge effort from Pedro Porro, the hero at the weekend, for ‘the Green & Whites’ to go two goals ahead in the 80th minute, with the Spaniard striking sweetly from distance to catch Jardim out.

With the three points in the bag, Sporting weren’t to bow out without a sour note, as João Palhinha picked up a yellow card that leaves him out of the visitors’ next game, against city rivals Benfica, next Monday.

Palhinha card was baffling but why did Amorim put him in?

Anyways important win.
Praise must be given to Sportings defence who have been amazing all season. They also play the offside trap superbly.

@Z that yellow card was intentional by the referee, I think Ruben put him in to secure the 1-0 but clearly didn't expect Pedro to score literally a minute later.

Either way what a cracking goal by Pedro.

Joao
There are no comments posted here yet