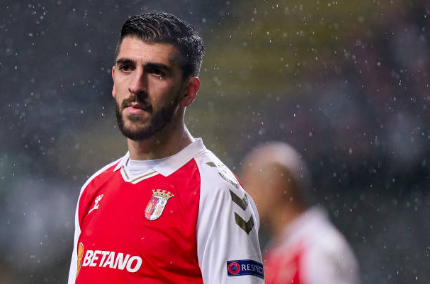 Sporting have signed out of the January transfer window with a record deal for Sporting de Braga forward Paulinho for €16 million.

The Portuguese forward is reunited with Rúben Amorim after three-and-a-half fruitful years with Braga, swapping the northern outfit for the capital on a four-and-a-half-year-deal.

After topping the Arsenalistas’ score-board with 23 goals in the 2019/20 season, Paulinho had been linked with a switch to Sporting for some time, finally sealing a deal with the current Primeira Liga leaders for €16 million.

The transfer sees activity occur in the opposite direction, as Andraž Sporar, falling behind Tiago Tomás in the pecking order at Sporting, joins Braga on loan.

Sporar, with three league goals to his name this season, will be available to sign for Carlos Carvalhal’s team on a permanent basis at any point, providing his €7.5 million buy-option is triggered.

Also joining the ex-Slovan Bratislava striker is Cristian Borja, leaving the Alvalade to provide Nuno Sequeira with competition for a €3 million price tag.

The two outfits kept themselves busy with other deals throughout the day, as Sporting welcomed back former Portugal international João Pereira on a free transfer from Trabzonspor, filling in for the departing Stefan Ristovski, reportedly bound for Dinamo Zagreb.

The Eagles’ final plays in the market came with the re-placement of Gedson Fernandes, no longer with José Mourinho’s Tottenham Hotspur after agreeing to a second temporary switch, this time with Galatasaray. Meanwhile Facundo Ferreyra departs on a free transfer, signing for Celta Vigo on a six-month-contract.

There was a handy surprise in store for FC Famalicão, keen to restore the buzz generated in the early days of the 2019/20 season, landing former Vitória and Benfica midfielder Pêpê on loan from Olympiakos to strengthen the side now managed by Jorge Silas.

From one Vitória midfielder to another, Denis Will Poha was allowed to leave Guimarães to land a loan switch to Portimonense, who are still holding out for the signing of Keisuke Honda on a six-month-deal, after leaving Botafogo in Brazil on a free.

The big news in Vila do Conde saw Rio Ave strengthen their Sporting contingent, agreeing to take Rafael Camacho on loan from the Lions in the final moments of the transfer market.

Camacho’s arrival paved the way for Rio Ave left back Matheus Reis to join Sporting for an undisclosed fee, having been left out of the first-team squad after refusing to agree a new deal, expiring at the end of the season. The final name through the door was Junior Brandão from Ludogorets, also signing for Miguel Cardoso’s side on loan.

Movement in Madeira saw Éber Bessa, once of Marítimo, join Nacional da Madeira on a free transfer from Botafogo, meanwhile the ‘Leões da Madeira’ settled for a permanent switch for 24-year-old Cypriot centre-half Andreas Karo, arriving from Lazio for figures that have not yet been revealed.

Obviously, the biggest story is Paulinho's move to Sporting. I think he'll fit in well and offer more link-up play than Sporar, who wasn't a great tactical fit.

I'm most excited about Famalicão (yes, I know they're controversial) signing Pepe....

Obviously, the biggest story is Paulinho's move to Sporting. I think he'll fit in well and offer more link-up play than Sporar, who wasn't a great tactical fit.

I'm most excited about Famalicão (yes, I know they're controversial) signing Pepe. With picking up Heriberto Tavares, Ruben Vinagre, Manuel Ugarte, Kraev, etc, etc, etc, they are looking solid. If Silas can make things click, they could be a different side this second half of the season.

Sorry for the ignorant question. But, why is Famalicão controversial?

Gedson Fernandes is not smart. He should play at SLB to get game time and improve his talent. It amazes me that some players opt to join different clubs when they are still in development.

@Andrew
Normally I would agree. He clearly has space on this squad. However, he knows that JJ would never provide him proper playing time. JJ will play his signings to the grave over accepting the academy has players that could fit in here.

@Andrew
Normally I would agree. He clearly has space on this squad. However, he knows that JJ would never provide him proper playing time. JJ will play his signings to the grave over accepting the academy has players that could fit in here.

JJ said all we needed to hear a while back. He essentially said it would be better to have Gedson on the bench at Benfica than at Tottenham. (Totally agree, however he already resigned him to not playing without even getting a look at the guy).

To rot on the bench, better off playing in Turkey. If JJ is still in charge next season, it would be inGedsons best interest to find a move away from the club permanent. JJ won’t give him time, even if deserving.

As for Paulinho. Great signing. No question.
I accept that Braga probably needed the cash flow and that there just were no other teams honestly interested in paying for the guy.
However, after the fiasco Sporting pulled on Braga last year withAmorim withholding payments and fighting it, I wouldn’t do business with Sporting period. If Sporting tried screwing Braga a few months ago, they are certainly capable of doing so again.

Great work on Sportings end to even get Salvador to even talk to them.