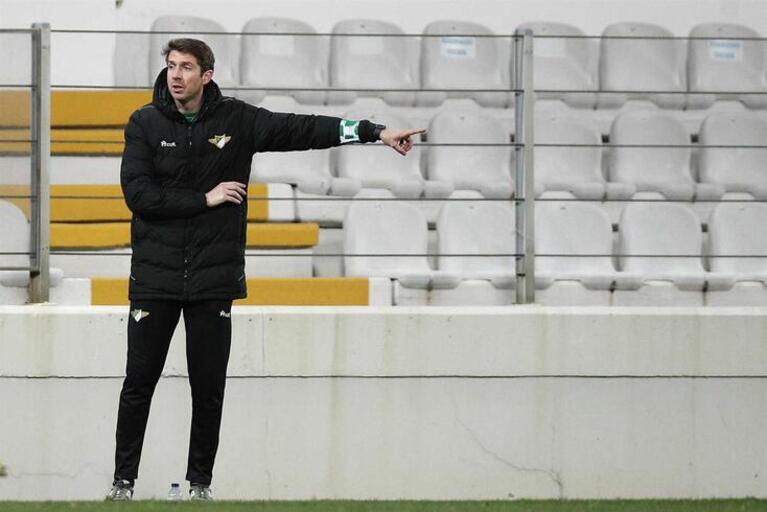 Liga NOS 20/21 reached the halfway mark after the latest round of fixtures which saw league leaders Sporting increase the gap at the top, taking full advantage of both Porto and Benfica dropping points.

Somewhat under the radar Moreirense are making steady improvements to a difficult campaign and are hoping it is third time lucky under their latest coach Vasco Seabra. The PortuGOAL Figure of the Week led his team to a second straight win on the road in triumphing over Famalicão.

Only 37 years old, Vasco Seabra already has a decent level of experience in Portuguese football having coached Paços Ferreira, Famalicão and Mafra before he was hired for a big job with a cash-injected Boavista last summer. The spell ended up being somewhat disastrous as the manager was unable to live up to increased expectation, leaving his role with the team struggling in the lower reaches of the table.

Seabra has since bounced back though, stepping into the breach at Moreirense at the start of this calendar year and slowly he looks to be making an imprint on the team. In Liga NOS he has only lost one of his 5 matches in charge now (to a high-flying rampant Braga) and has made the best of tricky conditions at the helm, not least a considerable injury list.

Long term injuries to key players such as Pedro Amador and Pedro Nuno, coupled with the attack blunted by absences of Felipe Pires and André Luis have seen Seabra’s options limited but he has adapted.

The players have also struggled under the issue of a constant change in management this campaign, Seabra representing the third permanent coach after the departures of Ricardo Soares and César Peixoto. Both of the aforementioned coaches tinkered with the team’s formation, favouring at times a largely unsuccessful 3-4-3, a system Seabra largely has thrown out since arriving at the club.

However for Thursday’s trip to Famalicão Seabra actually returned to the 3-4-3 to try and combat a similar system implemented by his opposite number Silas. Winter signing Abdoulaye Ba made his debut as part of the three man defence while Filipe Soares and Walterson were pushed into more unfamiliar attacking areas.

The moves paid off considerably as Moreirense made a sharp start to the game, passing the ball well and showing good movement off it. Alex Soares almost finished off a slick move in just the 4th minute only for Famalicão keeper Luiz Júnior to pull off a superb close range save.

They rode their luck shortly after to stay level after Famalicão got in behind the defence, an excellent last ditch recovery from Steven Vitória keeping the score at 0-0.

The deadlock was broken midway through the first half though with more intelligent attacking play from Seabra’s side. A switch of play found Walterson in space and his cross was diverted into his own net by Riccieli.

Moreirense continued to attack Famalicão and got their reward just before the half time whistle with Walterson the supplier again. His run wasn’t stopped by the home side and the Brazilian picked out compatriot Yan Matheus, who confidently fired into the net.

Both teams had chances to change the scoreline in the second half but Moreirense ended up closing out an important win.

A vital three points for Seabra as Moreirense moved into the top half of Liga NOS and into a highly respectable 8th place. A clean sheet in the bag too, very welcome off the back of shipping four goals in the previous match with Braga.

Promising signs then for Moreirense under Seabra’s stewardship, who’s brief will have been simply preserving the club’s Liga NOS status. With a seven point gap to the relegation zone opened up at the halfway point of the campaign the young manager is looking an effective appointment already.

Moreirense can be a dangerous squadron if they keep this up. Their new gaffer, Seabra, needs to have a fit squad to continue to climb the ranks.