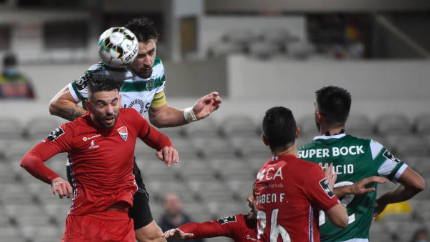 Sporting have opened up an eight-point lead at the top of the Primeira Liga table after a late Sebastián Coates brace saw the Lions take Gil Vicente down with a 2-1 victory.

On a stormy night in Barcelos, Gil Vicente threatened to deal Sporting their first defeat of the season after holding onto a 1-0 lead right up until the 83rd minute.

Two late goals from skipper Coates defined a different end to the tale in the 18th fixture of the season, however, turning the table on Gil Vicente and securing a 2-1 victory. The win places Sporting eight points clear of FC Porto after the Dragons blew a 2-0 lead away to Sporting de Braga, drawing 2-2 in the dying embers of the game on Sunday night.

Rather than relying on late drama, Benfica got their business done early with two punctual goals against FC Famalicão the following night, registering a bounce-back result and sneaking back within touching distance of second and third-placed Porto and Braga.

Three points separated both Braga and FC Porto going into Sunday’s Primeira Liga clash between two sides who, courtesy of a two-legged Taça de Portugal tie, will be seeing a lot of each other in the coming days.

Braga started well, causing danger through Abel Ruiz, but the game’s first goal was Porto’s to claim via the penalty spot, converted by Sérgio Oliveira in the 35th minute after a foul on Moussa Marega inside the box.

The Dragons found themselves two goals ahead in the second half, doubling their advantage through Mehdi Taremi in the 54th minute, but their fortunes were set to change on the hour-mark after Jesús Corona picked up a second yellow card to leave them down to ten men.

Braga applied the pressure, setting up a grand-stand finish with four minutes of the 90 to go through Fransérgio’s strike, squeezing just under Augustín Marchesín and into the back of the net.

The visitors sunk with a couple minutes of the game left on the clock as Nicolás Gaitán, unmarked at the back-post, was on hand to tap in from close range and snatch a late draw for the Arsenalistas, loosening Porto’s grip on the title race.

With Jorge Jesus back in the dugout, the Eagles were keen to put a stop to their poor form of late against another side, Famalicão, in desperate need of points.

Benfica fired themselves up early, taking the lead through Darwin Nuñez after Everton Cebolinha worked his way into the box, hooking a shot aimed at the far post for the Uruguayan to tap in after two minutes.

Nicolás Otamendi mounted the problems on Famalicão’s lap with the hosts’ second goal in the 7th minute, reacting first to a rebound to volley in past Luiz Junior.

The visitors came close to bouncing back through Gil Dias in the 29th minute, striking the post on the half volley, and it was the AS Monaco man causing all the danger again in the second period, striking just wide of Odisseas Vlachodimos’ post from range.

Darwin almost amplified the score and notched a second for himself in the 82nd minute, diving onto a threaded pass from Haris Seferovic, but an effort over the bar ensured Benfica’s early 2-0 lead remained untouched at full time.

Courtesy of Porto’s draw away to Braga, Sporting were gifted with the opportunity of going eight points clear at the top of the table, having already registered one of their most impressive first halves of a season in history, serving as a good omen for their not-so-muted title ambitions.

Just done the math. Sporting have accumulated 13 (THIRTEEN!) extra points in 2020/21 with goals scored after the 80th minute:

The Lions didn’t come across as the most inspired on a rainy night in Barcelos, versus Gil Vicente, as the hosts came close to breaking the deadlock through Yves Baraye, slamming a rebounded effort wide from an excellent goal-scoring position in the 22nd minute.

Gil Vicente took their second chance in front of goal in the 36th minute as Kanya Fujimoto, emerging inside the area, timed his run to perfection before volleying in the opener past a helpless Antonio Adan.

The result called for changes in the second period from the Lions’ end, with one of those substitutions, Tiago Tomás, wasting a good opportunity with an uncontrolled volley over from the back-post.

Gil Vicente shot-stopper Denis played an important role with ten minutes to go, denying both Tiago Tomás and Paulinho in the final ten minutes before the veteran was outdone by an 83rd minute volley from Coates, coming from the edge of the box.

Sporting’s captain turned the game on its head in prime time, taking flight inside the area to nod past Denis and open up an eight-point-gap at the top for the Lisbon giants by securing a 2-1 win.

This is the game that proved sporting has what it takes, great comeback and turnaround in the second half. Amorim made great subs and tactical switches.