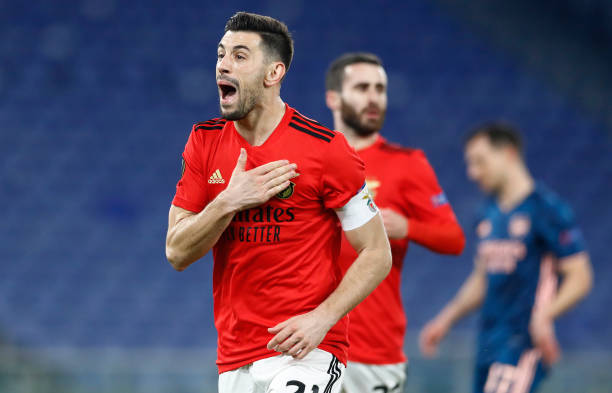 The Europa League action tonight saw Braga helpless to stop Roma when they were reduced to ten men. Ricardo Esgaio was sent off for a second yellow card with the home side already 1-0 down through Edin Džeko, before Borja Mayoral made it 2-0 to give Paulo Fonseca’s side a big advantage.

Meanwhile, a Pizzi penalty put Benfica ahead in Rome against Arsenal, where the Eagles were playing their “home” leg. But the English team equalised to make it 1-1 just moments later through Bukayo Saka in a tense affair that leaves everything to play for in the second leg.

Carlos Carvalhal’s side knew it was going to be tough against Paulo Fonseca’s Roma. Nevertheless, Braga have been in good form lately, while the Italian side were suffering from some defensive absences that saw ex-Benfica man Bryan Cristante playing as a makeshift centre back.

But things couldn’t have started off worse for Braga as they were caught out early on. Leo Spinazzola’s cross from the left gave Edin Džeko an easy opportunity to put the visitors ahead after just five minutes. 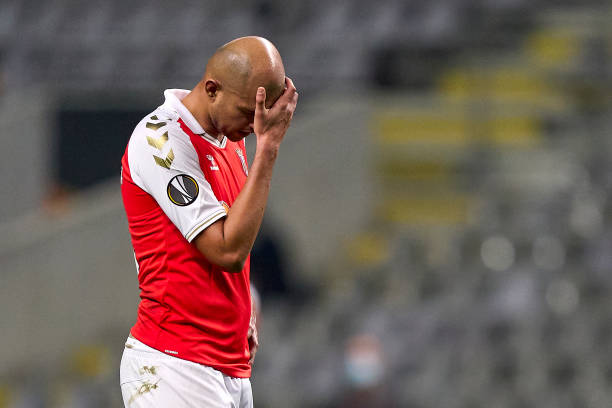 Braga did come back from that but were unable to create any clear-cut opportunities. Their hopes of getting back in the game were hit early on in the second half when Ricardo Esgaio received a second yellow card. It meant Carvalhal had to bring on Zé Carlos to fill in at defence at the expense of taking off Nico Gaitán.

Spinazzola and Džeko linked up again for what looked like a certain second goal, but this time goalkeeper Matheus Magalhães was able to smother the ball.

Braga probably would have taken a 1-0 loss, but Roma made the most of the extra man when Borja Mayoral finished off some fluid attacking play. That second goal means it will be even more difficult for Braga to make a comeback in the second leg.

For the first leg of the tie against Arsenal, Benfica traded one picturesque capital city famous for its seven hills for another, with Rome’s Stadio Olimpico serving as the “home” ground for the Lisbon side.

Jorge Jesus’s side elected for a back three of Nicolás Otamendi, Jan Vertonghen, and Lucas Veríssimo making his debut, to try and keep an Arsenal side with familiar faces like David Luiz and Cédric Soares at bay.

The plan worked well in the first half. Although Arsenal had plenty of the ball, they only created one great chance when Héctor Bellerín’s low cross found Pierre Aubameyang for what seemed like a simple finish. But the forward’s shot went wide of Helton Leite’s goal.

The game improved considerably in the second half, with Benfica seeing much more of the ball. Indeed, in the 53rd minute Benfica won a penalty as Emile Smith-Rowe handballed while blocking a cross with Pizzi making no mistake from the spot.

But Benfica’s lead did not last long. Arsenal passed well just outside the area and Cédric Soares found plenty of space to square the ball for Bukayo Saka to pass the ball into the net.

Both sides had chances to grab a winner, with substitutes Everton and Rafa having good attempts, while Aubameyang missed the target again and Saka proved to be a thorn in the side of the Portuguese team.

Although a 1-1 draw means Benfica concede an “away” goal, the overall performance will give Jorge Jesus and Benfica confidence that they can better this result in the second leg in Athens.