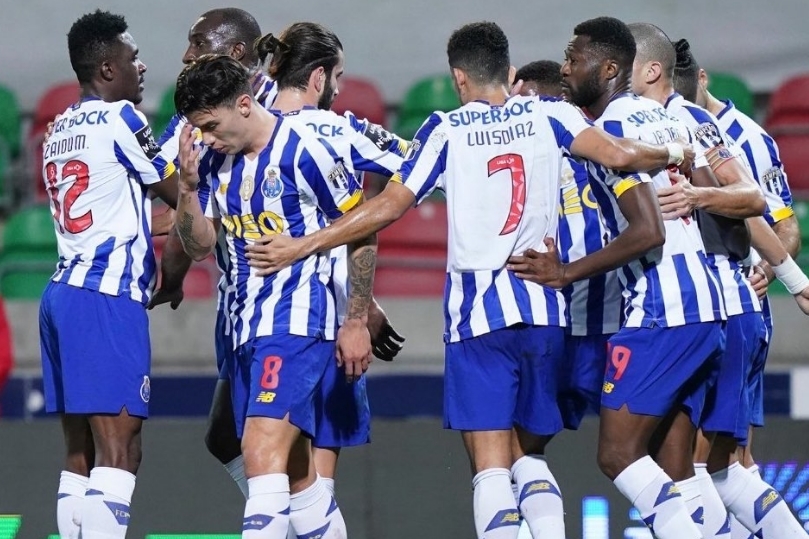 FC Porto have kept their slim title hopes alive ahead of next week’s clash with Sporting after a late Otávio penalty secured a 2-1 victory away to Marítimo, reinstating a ten-point-gap between them and their upcoming first-placed opponents.

The Lions were the first in action at home against a re-emerging Portimonense side, skipping by the southern outfit with a comfortable 2-0 victory.

Sporting de Braga registered an important win of their own, defeating Tondela 4-2 before Benfica prolonged their sorry form away to Farense, drawing 0-0 and falling four points behind third.

Porto pulled the curtains on Matchday 20 with an important win away to Marítimo, setting themselves up for Saturday’s must-win fixture at home to Sporting.

Without their latest acquisition Paulinho for the first time since landing his signature from Braga, Sporting hosted Portimonense in a rain-filled Alvalade pitch, eyeing up another victory ahead of next week’s crunch clash versus Porto.

After much control, Sporting were able to make possession count and take the lead in the 27th minute, going a goal up via Zouhair Feddal’s tap-in from a set-piece.

Nuno Santos stepped up to make it 2-0 just four minutes later, picking out the bottom-right corner on his favoured left foot before Portimonense finished the half strongly.

The table-toppers were limited to a couple of saved efforts from Pedro Gonçalves and Jovane Cabral in a more controlled second half, setting Sporting in stroll mode towards another important set of three points.

Mixing nicely with Porto and Benfica in the top 3, Sunday’s fixture at home to Tondela gave Carlos Carvalhal’s men the chance to rise up to second place, at least momentarily, prior to Porto’s match-up against Marítimo.

In a half that belonged entirely to the hosts, Lucas Piazon got Braga off to a flying start with a finish from Galeno’s cut-back in the 18th minute, with Ricardo Horta, moments later, doubling that lead after 39 minutes of football.

João Novais had even more to show off for the Arsenalistas en route to half time, rocketing a long-range effort in off the crossbar and taking a three-goal-advantage with him into the break.

Five minutes into the second period, Piazon was on hand to bag a brace before two cute finishes at the other end, picked up by Souleymane Anne and Jaquité, cut the advantage down to 4-2.

Searching for their first away win in the league since the 20th December, Benfica were hoping to draw a line under their dismal form that, prior to kick-off, had them level on points with fifth-placed Paços de Ferreira.

A speculative effort from Everton Cebolinha and a first-time finish skipping wide from Darwin Nuñez, originating from a Nuno Tavares cross, was as good as it got for Benfica in the first half against Farense, who in turn had a 39th minute goal from Licá ruled out by the officials.

Pizzi edged the Eagles closer with a snappy effort from the edge of the box, clipping the outside of the post, but the Portuguese midfielder’s attempt only served to induce frustration, rather than inspiration, with a 0-0 stalemate pending.

After three league draws on the spin and Sporting threatening to increase the advantage at the top further, Porto were on red alert against Maritímo in their must-win clash in Madeira, this Monday.

The Dragons took just 14 minutes to grab their first of the night, finished inside of the box by Matheus Uribe, but trouble was just over the horizon at the Barreiros. A mere four minutes later, Léo Andrade was alive to Joel Tagueu’s low flick from a corner, tapping in the equaliser at the back-post after VARs validation.

Mehdi Taremi could and should have made it 2-1 for Porto in the 38th minute after reacting first to Zaidu Sanusi’s glancing header, saved by a floor-bound Amir Abedzadeh before the forward aimed his rebound directly into the keeper.

Augustín Marchesín was just as heroic deep in the second half, stopping Zainedine from rippling the net with a diving header that almost set Léo Andrade up from the follow-up.

The Argentine keeper’s work between the sticks set up late drama for Porto to gather in the 93rd minute, after Francisco Conceiçao was brought down inside the box by Rubén Macedo’s nudge.

Deputising for Sérgio Oliveira on penalty-kick duties, Otávio left Amir rooted to his spot in a crucial moment for Porto and their title chase, reinstating a ten-point-gap before next week’s fierce and eagerly-anticipated clash against first-placed Sporting.

Samuel
There are no comments posted here yet