Europa League: Benfica and Braga eliminated in the Round of 32 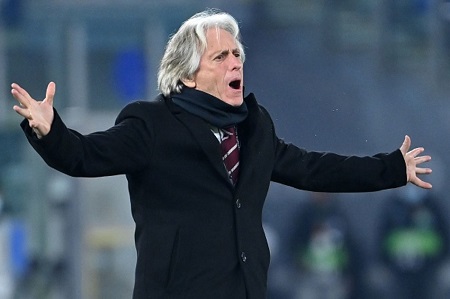 There is only one Portuguese team remaining in Europe after Benfica and Braga were knocked out of the UEFA Europa League this evening.

Benfica went down 3-2 to Arsenal in Greece after blowing a 2-1 lead. The Eagles lost 4-3 on aggregate. Braga were defeated 3-1 against Roma in Italy after a 2-0 loss at home in the first leg.

It was a cautious opening in Piraeus with Benfica threatening through Diogo Gonçalves and Rafa Silva. Benfica found themselves behind in the 21st minute, Bukayo Saka splitting the Eagles defence with Pierre-Emerick Aubameyang dinking the ball past Helton Leite.

Benfica looked boring and predictable before Dani Ceballos took down Julian Weigl outside the 18-yard box. Gonçalves unleashed an unstoppable free kick into the top corner to even the score at half time.

Jorge Jesus made a triple substitution on the hour mark with Adel Taarabt, Pizzi and Haris Seferovic replaced by Gabriel Pires, Everton and Darwin Núñez.

Minutes later they were in front. It was a seemingly harmless long ball from Leite, but a sloppy back pass from Dani Ceballos allowed Rafa to pounce, take it past the stranded Bernd Leno and finish into an empty net.

The equation for Benfica was simple, avoid defeat and advance to the next round.

Mikel Arteta responded by bringing on Thomas Partey and Willian for Ceballos and Emile Smith Rowe. Willian was immediately involved, finding Kieren Tierney who stepped past a half hearted challenge from Everton and fired a low drive into the bottom corner.

Núñez shot wide and Saka fired over from a tight angle before Alexandre Lacazette replaced Héctor Bellerín and Alejandro Grimaldo made way for Nuno Tavares.

Tavares would play a part in Benfica's downfall three minutes from time, allowing Saka too much time and space to send a cross to the back post where Aubameyang headed home from a yard out.

Benfica missed a great chance to progress against an out of sorts Arsenal side, but in the end it was the class from Saka and Aubameyang that made the difference.

Jorge Jesus ’ side turn their attentions to the Taça de Portugal where they lead Estoril 3-1 before the semi-final second leg at the Estádio da Luz. Their Primeira Liga title chances are all but over as they sit fourth behind Sporting CP, Porto and Sporting Braga, 15 points behind the Lions.

Braga were always going to be up against it in Rome, trailing 2-0 after the first leg and facing a far superior squad. So it proved at the Stadio Olimpico, with Roma looking more likely before Stephan El Shaarawy’s shot hit the post, the ball falling kindly to Edin Dzeko who fired home in the 23rd minute.

Piazon couldn’t steer a Zé Carlos cross on target before the Brazilian fired over from distance. Andraz Sporar pounced on a poor pass, raced through and tested Pau López with a fierce strike but the hosts soon regained control. 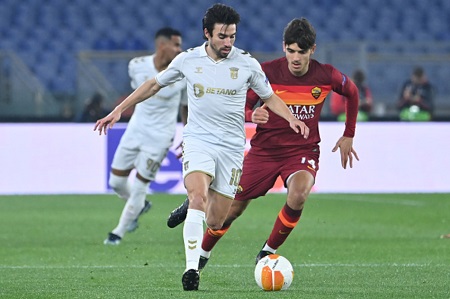 Pedro struck the bar just before half time as Braga emerged from the break requiring three unanswered goals to progress.

Carlos Carvalhal made four changes as Fransergio, Ricardo Horta, Abel Ruiz and Cristián Borja all came on but it had little effect. Carles Pérez was fouled by João Novais, Lorenzo Pellegrini firing wide from the penalty spot.

Pellegrini soon made up for his miss with a delicious cross that found Pérez who volleyed past Tiago Sá.

Carvalhal won’t be too dismayed with few giving his side a chance against Roma. Braga can focus on maintaining their four point lead over Benfica in the Primeira Liga and their Taça de Portugal semi-final second leg against Porto.

This side is in transition and Carvalhal is going to need much more time before aiming to emulate their run to the 2010-11 UEFA Europa League final.

JJ should be a politician, his ability to blame invisible enemies like Covid for Benficas poor form is amazing. Of course only Benfica suffered from Covid, not the entire planet, every league and team. Nope, in JJ mind only Benfica.

JJ should be a politician, his ability to blame invisible enemies like Covid for Benficas poor form is amazing. Of course only Benfica suffered from Covid, not the entire planet, every league and team. Nope, in JJ mind only Benfica.

He has always been a clown, its amazing the support he received for blowing league titles, not playing Portuguese players (Bernardo Silva, Danilo P, Joao Cancelo, Gonzalo Guedes, Andre Gomes, etc, etc.) and 2 Europa finals from the Benfica supporters. Even though his teams were stacked beyond belief.

This is the same clown who didnt sub on Oscar Cardozo when he needed goals, lost the treble in 15 days and played Malgarejo at LB in an Europa league final. He lost to a guy named Kelvin! Where is he now? Rolling Moqueca in Botofogo.

JJ wining in Brasil shows only how awful Brasil footballs leagues are, not how good JJ is. He should be gone but things dont work on logic at Benfica.

Unfortunate for Braga, was always going to be difficult though.

Arsenal didn’t look good, still good enough to put three by Benfica though.
Sick of JJ and his inability to get something going. Please leave and take LFV with you. Have your...

Unfortunate for Braga, was always going to be difficult though.

Arsenal didn’t look good, still good enough to put three by Benfica though.
Sick of JJ and his inability to get something going. Please leave and take LFV with you. Have your romance elsewhere where Benfica aren’t getting thrown to the trash as a result of it.

Quite frankly, third place finish is a long shot the way they are playing.