PortuGOAL Figure of the Week: Mario González makes the difference for triumphant Tondela 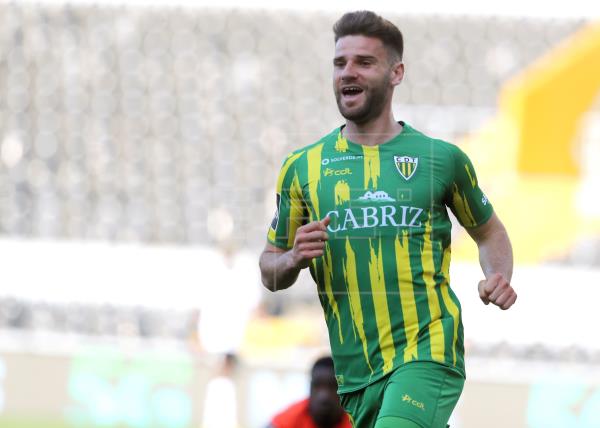 Liga NOS returned after a busy international break for the 25th round of the campaign. League leaders Sporting suffered a rare slip up in a draw with Moreirense, allowing Porto, Benfica and Braga to make up some ground each with narrow victories.

The relegation battle continues to intrigue, Gil Vicente continuing some fine recent form to overcome Rio Ave while Portimonense piled on the misery for Nacional in dishing out a 5-1 thrashing. Boavista and Famalicão also steered away from trouble over Belenenses SAD and Paços Ferreira respectively.

Another team looking to leave relegation in the rear view mirror is Tondela as they climbed back into the top half of the league with an excellent triumph at Vitória Guimarães. Star striker and chief goal-getter Mario González was the difference for them once more and he is the PortuGOAL Figure of the Week.

Spanish forward Mario González although still only 25 is something of a late bloomer in modern footballing terms. Coming through Villarreal’s academy, he was unable to progress beyond the club’s B team level and instead moved to France’s Ligue 2 with Clermont back in 2019, although his stint was largely fruitless and he returned to his boyhood club a year later. His homecoming was brief though as Tondela acquired the striker on a season-long loan deal as they looked to fill the void of summer departures in their attacking areas, namely Ronan and Rúben Fonseca.

One potential draw to Tondela for González was the ability to link up with compatriot Pako Ayesterán, who had been hired as Tondela manager earlier last summer. However the coach had to be patient in order to see his new charge at full fitness, the striker who was already late arrival to the team was severely hampered initially by a thigh injury, and subsequently a positive Covid-19 test disrupted his settling period further. Even when González managed to get a consistent run in the starting XI from early December, his participation was frequently constrained and occasionally prematurely ended by his ongoing injury which, in part due to the pandemic’s truncation of the league schedule, refused to fully heal.

This didn’t stop González making a significant impact on the field though as Tondela got the goal threat that had been missing from their play, the Spaniard scoring five times in a run of seven games which included vital victories over Santa Clara, Famalicão and Boavista.

These goals were of variety too, showing just what he is capable of as a player as his efforts ranged from predatory efforts from inside the six yard box to exceptional headers, his aerial prowess has been a key factor in his ever-burgeoning tally.

The aforementioned clinical instincts were the driving force behind a superb win for his team this weekend as they faced a tricky trip to Vitória Guimarães, a team out of form but still a testing opponent on their own patch. The first game back after the international break meant Tondela batteries had been recharged and this was evident as they started the match fast, and in fact González should have been on the scoresheet inside the first minute. Perhaps not sharp enough to the pace of the game yet, he appeared caught in two minds when played through by Filipe Ferreira’s exquisite pass and failed to capitalise on the opportunity.

González showed no such rustiness just before the half hour mark though as Tondela took the lead. It was the same combination as the first minute chance, as Ferreira found the Spanish striker with another fine ball from the left flank, and this time González controlled expertly before tucking beyond the advancing Bruno Varela.

Vitória levelled matters before the break but with thirteen minutes of the match remaining González would land the decisive blow with his second goal. This time the finish was even better than the first, a first time volley from Bebeto’s deep cross giving Varela no chance.

A stunning effort from the Spaniard, on the run and just inside the penalty area when there did not appear too much danger for the home team. Tondela survived some late Vitória pressure to come away with the three points and edge back into the top half of the Liga NOS table.

A brilliant season for González gets better and better, taking his league tally to nine which can only be bettered by three players, all from the country’s “big three” teams. The fact that his campaign has been so hampered by injury is a testament to his record, which now reads at a goal every other game.

González looks to have followed in the footsteps of previous Tondela strikers like Nathan Júnior and António Tomané in managing to lead the line effectively and provide a goalscoring threat in teams that don’t always necessarily find the latter art easy to come by. As long as he stays fit, Auriverdes fans should be able to enjoy a far more stress-free end to a Liga NOS campaign than they have been accustomed to and look forward to more top flight football in 2021/22,