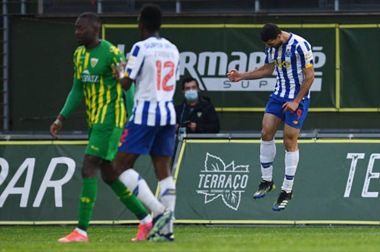 FC Porto have cut the gap at the top of the Primeira Liga to six points after Sporting were unable to go beyond a 1-1 draw at home to FC Famalicão, this Sunday.

The Dragons came out of Matchday 26 with a straight-forward 2-0 win versus Tondela, ramping up the pressure on Sporting before switching their attentions to next week’s UEFA Champions League second leg versus Chelsea.

Benfica were able to do the same with a challenging away trip to Paços de Ferreira made easier by an early Stephen Eustáquio red card and a positive Haris Seferovic showing in a 5-0 victory.

Sporting’s 1-1 draw at Alvalade completed a positive weekend for their rivals, as Sporting de Braga were also left disappointed with a home draw, drifting away in fourth place after failing to beat Belenenses.

Following the Dragons’ midweek disappointment against Chelsea in the Champions League, the title hopefuls were tasked with switching out their chip and reapplying the pressure on Sporting in the league, with Tondela awaiting in a rain-soaked Estádio João Cardoso.

The visitors took just 19 minutes to place themselves in front with Toni Martinez finding the back of the net for a second league game running, taking a cross down on his chest before beating a shot across goal.

Porto continued on top throughout the first half and into the break, but the chances waned towards a potentially nervy end against a fellow northern outfit.

Mehdi Taremi eased all worries, however, doubling the lead for Sérgio Conceição’s men in the 83rd minute after following up his header and tapping in from close range, securing Porto’s win.

A long way away from the inconsistent form that haunted Benfica throughout the wintery months, Jorge Jesus’ men had a real test on their hands with an away trip to the Estádio do Móvel, home to high-flying Paços.

The hosts dipped themselves in big trouble by the 20th minute, however, courtesy of a dangerous challenge with studs showing from Eustáquio, catching Julian Weigl’s shin and subsequently earning the midfielder a straight red card.

Benfica made their superiority count with a keen high-press from Diogo Gonçalves, coupled with a strike across goal from the wing-back, giving the Eagles the lead in the 38th minute.

Gian-Luca Waldschmidt should’ve made it 2-0 after Seferovic laid a pass on a plate for the German to finish, striking against the beaten Jordi instead, but Rafa wouldn’t be as wasteful with the Swiss striker’s service, taking it around the keeper one-on-one to double Benfica’s lead.

Seferovic pinched a goal for himself with a cute dink over the keeper just before the break, with the Lisbon outfit looking towards the forward in emphatic form again in the second half, turning his defender before slamming in his brace in the 78th minute.

The final honours in a comprehensive 5-0 victory for Benfica fell Darwin Nuñez's way, leaving the striker in tears after scoring for the first time in two months.

The pressure was on Braga to keep in touch with third-placed Benfica, welcoming Belenenses to the Estádio Municipal ahead of Sunday’s clash between the two Primeira Liga old-timers.

An amateur loss of possession from the visitors almost led to the opening Braga had hoped for, with Stanislav Kritsyuk the only man standing between Ricardo Horta and a tasty lob into the back of the net in the 12th minute.

Belenenses responded with an outstretched effort from Miguel Cardoso at the back-post, requiring a big save from Matheus to keep the scores locked at 0-0 after 20 minutes.

The man to eventually break the deadlock would be Nicolás Gaitan, picking up on Andraž Sporar’s forceful back-heel to finish on his trusted left foot, ten minutes from the interval.

Matteo Cassierra undid Braga’s advantage in the second half with an eye-catching bit of skill to take both Matheus and Raúl Silva out of his way in the 59th minute, before tapping into an empty net.

The goals dried up there, however, with Braga’s non-response setting them three points behind Benfica after a 1-1 draw.

After last week’s disappointment away to Moreirense, Famalicão’s visit to the Alvalade was looked at as the prompt bounce-back for Rúben Amorim’s men, desperate to ease the pressure of their eight-point advantage at the top of the table.

Pedro Gonçalves’ 25th-minute goal promised a night of success for the Lions, winning possession high up the pitch before being set up by the selfless Paulinho and picking out the top corner with a first-time finish.

Famalicão were rapid with their reply to their former player’s goal, making it 1-1 just two minutes later through Anderson, picking up from Ivan Jaime’s drive into the box to put the ball past Antonio Adan.

Tiago Tomás scuppered a big chance to relaunch Sporting in the second half, taking a loose touch inside the box from Sebastian Coates’ pass before being swamped by Patrick William when firing over.

With Coates again at the heart of things, winning a knock-down inside the box, Jovane Cabral had a prime opportunity to edge the hosts in front, but an agonising slice of the ball on his weaker foot, flying high and wide, summarised a frustrating night for the league leaders, picking up consecutive 1-1 draws.

Looking like we might have a much closer title race than it seemed a few weeks ago! In my eyes still, no team deserves it more than Sporting this season. As much as I would love to see Benfica take it, JJ’s inconsistency has prevented this.

Looking like we might have a much closer title race than it seemed a few weeks ago! In my eyes still, no team deserves it more than Sporting this season. As much as I would love to see Benfica take it, JJ’s inconsistency has prevented this.

Let’s not forget - of the remaining fixtures, Sporting still has to play Benfica and Braga away from home (as well as Rio Ave who are very capable of grinding out some big wins). It’s always like to see a competitive title race.
Tiago Tomás is an exciting young player, but his finishing is nowhere near what it needs to be if he is to be considered one of the best young strikers. I thought Nuno Santos might have been a better option up top with Paulinho.

Happy to see Darwin grab a goal, he’s certainly a great talent. This is the first time I’ve seen some real GREAT defensive solidity in JJ’s Benfica side. Even when we had Luisao, Luiz, Garay, Lindelof, I never felt as comfortable with the backline as I do now. After some uncertainty, Diogo Gonçalves is most definitely the best option for RB/RWB. Vlachodimos is still a fantastic keeper, but good on Helton Leite for putting in some great performances.

Let’s see what happens over the next few weeks!

Paulinho turned out to be a bust, bad move by Sporting. We are not going to win the title this way.

I agree with Teresa, the title race could well end up being closer than it seemed it would not too long ago. Things can change very quickly in football and thus we can never rest on our laurels with anything. If Sporting drop points again next...

I agree with Teresa, the title race could well end up being closer than it seemed it would not too long ago. Things can change very quickly in football and thus we can never rest on our laurels with anything. If Sporting drop points again next weekend, then things will get very interesting. As Teresa mentions, they still have to play Benfica, Braga and Rio Ave away from home this season. Sporting and Amorim have done very well to have set such a pace on top of the league for the whole season so far. However, I always thought their far fewer fixtures (just one league match a week all season compared to their two rivals playing every 3 days and one of those two matches a demanding European match) was heavily benefiting them...and I thought that once Benfica and Porto were out of Europe and it was an even playing field again in terms of fixtures, things might change again. In any case, Sporting are still in a very strong position to win the league and have everything in their own hands, but they are finally under some real pressure now, let's see how they deal with it.

As for my Benfica, I've been very happy with the team's performances over the last few weeks. This is the Benfica we all wanted to see this season and the squad is finally showing its potential. I think the first half of the season, there was just too much of a facelift, so many new players and a new coach, and then the heavy covid wave that hit us in January (the worst for any club in Europe this season so far) made us drop too many points that month and we fell too far behind. But I think if the season were starting now, it would be a very different story as the team has been looking very strong. A large part of that has been how much the defence has improved. Lucas Verissimo looks a great signing and a real craque in central defence. Diogo Goncalves has won the right back position, he's so much better than Almeida or Gilberto. And Helton Elite may not be as spectacular a shot stopper as Odysseas, but he commands his area better and communicates better with his defence. Weigl has also improved a lot in this second half of the season and thus the CM has been looking better too. Realistically it's probably too late in the season already for us to seriously challenge for the title, but securing second place (and direct CL qualification) is the target, and the team should build on this form going into next season when I expect a much better start and overall season from us.

Two disappointing results for sporting.
Imo Sporting has missed Nuno Santos. When he came on near the end he was causing danger. He has a good work ethic and delivers good crosses. Only one of Paulinho and TT should start at a time.

Two disappointing results for sporting.
Imo Sporting has missed Nuno Santos. When he came on near the end he was causing danger. He has a good work ethic and delivers good crosses. Only one of Paulinho and TT should start at a time.

I am not sure why Amorim has moved a bit away from the 3-4-3 that was so successful.

Goncalo inacio has been great for sporting and his absence was evident yesterday as sporting had trouble playing the ball out of the back.

Sporting still has to play Braga and benfica but they also have to play Maritimo and nacional at home, boavista, Farense , B-SAD - all very winnable games.

I believe the game on Friday against Farense will be vital. If sporting wins they can get back to winning ways and go from there. Not winning will be a disaster and will make the league very difficult to win.