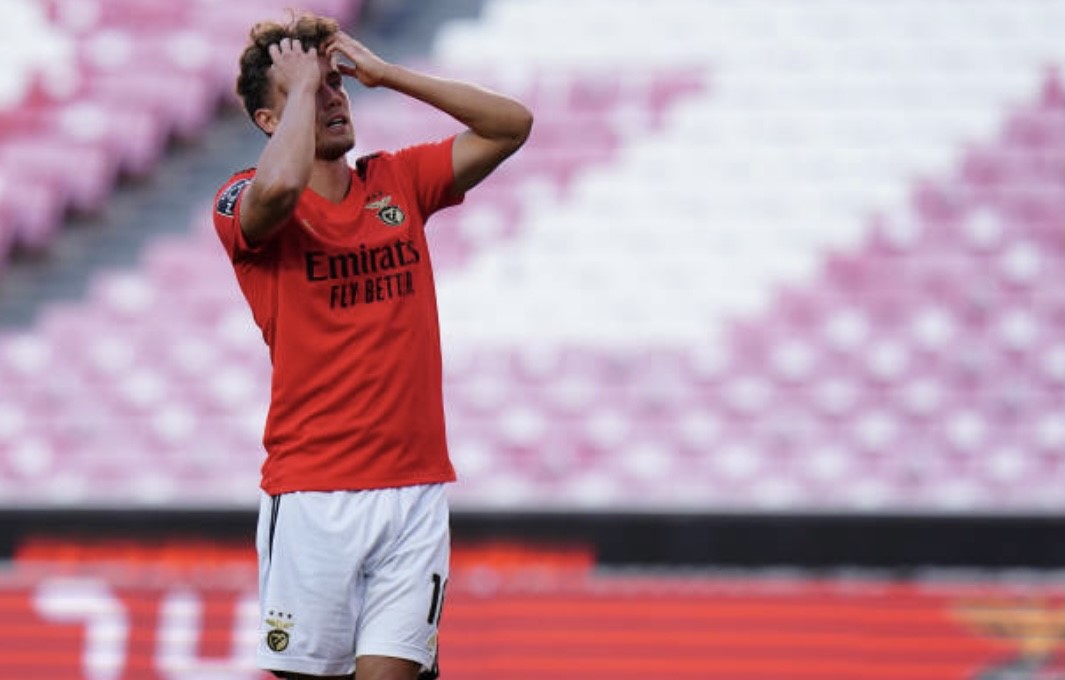 Benfica have seen their slim hopes of fighting for the Primeira Liga title slashed after losing 2-1 at home to Gil Vicente, this Saturday.

The Eagles were looking to match Sporting’s result away to Farense, defeating the southerners 1-0 with a sole Pedro Gonçalves goal, but were stopped in their tracks by two goals from the visiting Gil Vicente at the Estádio da Luz.

Benfica’s loss enabled Porto to distance themselves yet again from their third-placed rivals, beating Nacional da Madeira 1-0 away from home to set themselves six points either side of the lacklustre Lisbon outfit and table-topping Sporting.

Sporting de Braga, however, would fail to fully capitalise on the stumble from Jorge Jesus’ men, drawing 0-0 away to ten-man Rio Ave and shortening the distance from the podium to two points.

As the Lions of the South welcomed those from the capital, Farense and Sporting went head-to-head in a hunt for three precious points, desperately needed at opposing ends of the Primeira Liga table.

With the two sides trading blows early on, Sebastian Coates came the closest to planting a significant stamp on the game with a towering header, tipped away by former Sporting keeper Beto in the 35th minute.

From the resulting corner, however, the visitors would find a way through as the ball fell kindly inside the area for Pedro Gonçalves to take aim, rifling past a hopeless Beto.

Farense were left crying out for a penalty soon after as they entered the half-time interval a goal down, meanwhile Antonio Adan provided the hosts with an additional obstacle in the second half, shutting down a Pedro Henrique effort on the volley after Ryan Gauld’s measured ball over the top.

Beto rivalled Sporting’s Spanish shot-stopper with a crucial save at point-blank range to deny Paulinho in the 56th minute. Adan remained the busiest of the two as the home side piled on the pressure, dragging the Green & Whites’ over the line and back on winning terms.

With Sporting’s form wobbling and the on-song Benfica still to play each of their ‘Big Three’ rivals, Jorge Jesus’ men were hopeful of resuming their title charge with a seventh consecutive league win, hosting Gil Vicente at the Estádio da Luz.

The boys from Barcelos were up for the challenge against the Lisbon giants, however, fully utilising the space given to them on the break with Antoine Leautey’s opener, taking aim from the edge of the box in the 35th minute.

Benfica took until the hour-mark to respond, with two good chances falling to hitman Seferovic before the Swiss’ aimless efforts.

On the break, with ten minutes of normal time to go, Gil Vicente were ready to go at Benfica once more, finding success on the counter with Lourency’s finish from a tight angle to double the visitors’ lead.

A third Gil Vicente goal was found in the 87th minute, albeit at the wrong end to halve their lead late on, but it wouldn’t be enough to propel Benfica into late drama and avoid their fourth league defeat of the season.

Following Benfica’s shock defeat at home to Gil Vicente, Braga were blessed with the opportunity to catch their podium rivals, should they defeat Rio Ave in the Estádio dos Arcos first.

Pawel Kieszek was the hero in a closely-fought first half, denying Fransérgio in the 23rd minute with a strong palm onto the post before providing a big stop on the brink of half time to keep Ricardo Horta from scoring from close range.

Rio Ave had their moment, led by Gelson Dala’s run in behind that would result in a rebound for Franscisco Geraldes to steer in, only for the former Sporting man to guide a shot wide.

The hosts risked Braga’s domination in the second half after Dala picked up a straight red card, imposed by the VAR, for a tackle from behind, but Carlos Carvalhal’s men would fail to find a way past an inspired Kieszek, ensuring a goalless draw.

With their proud Champions League run coming to an end in midweek, against Chelsea, Porto turned their attentions to the foot race for the league title, threatening to start going their way.

Away to Nacional, however, Porto could’ve been a goal down as early as the 6th minute of the game after Éber Bessa’s penalty miss, with Augustin Marchesín playing a key role in the Brazilian’s misfortunes from the spot.

Sloppiness at the back from Nacional keeper António Filipe handed the Dragons an easy avenue to the opener, taken by Mehdi Taremi after Jesús Corona’s assist in the 20th minute.

Keen to make amends, Nacional went up a gear in the second half in hope of claiming an inspiring draw but, with the Blue and Whites holding firm, remained rooted to the bottom of the table after picking up defeat number 16 of the league season.

I have a feeling Porto will catch Sporting. It has the easier schedule. Let us wait and see what happens when Porto and Sporting clash with Benfica. Those two matches will be critical.

Sporting finally managed to right their ship, at least for the time being, in their title challenge. I do wonder if they’ll be able to keep the jitters under control if Porto keep pushing.

Porto got what they needed. Good game for the neutral!

Sporting finally managed to right their ship, at least for the time being, in their title challenge. I do wonder if they’ll be able to keep the jitters under control if Porto keep pushing.

Porto got what they needed. Good game for the neutral!

Lol another masterclass from the great JJ. Too bad Vieira will be too cowardly to admit his mistake and send him packing at the end of the season. Another season of JJ coming up unfortunately.

Fortunately for Benfica, Braga are falling short at this stage as well. It is a race for third, not second like I’d hope. Good luck.

JJ should never have come back, I can only remember a manging returning a couple of times being successful. I hope that Sporting can go on to win it all.

Pola33
There are no comments posted here yet