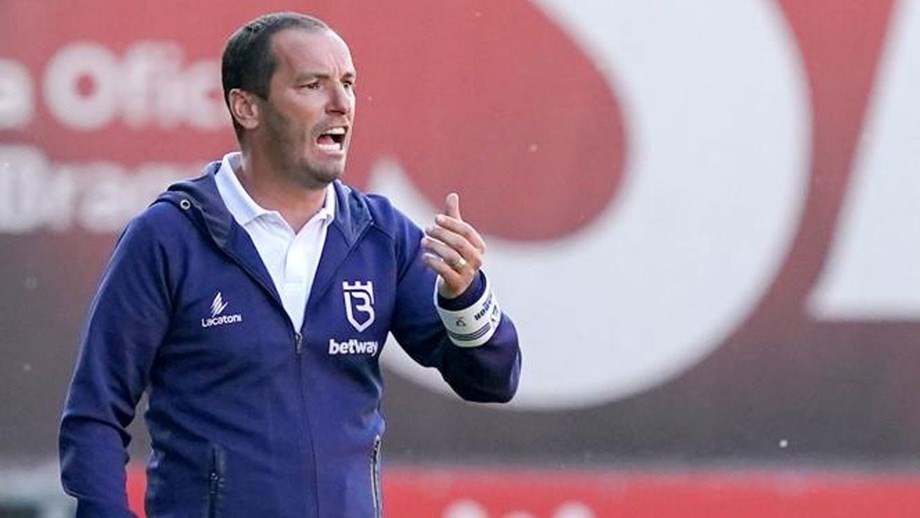 Only five rounds of the Liga NOS season remain as a busy week of football concluded with Farense and Portimonense sharing the spoils in the Algarve derby.

Nacional finally ended their dreadful run of form with a much-needed win over Vitória Guimarães, while fellow islanders Marítimo also boosted their relegation survival hopes by beating Boavista. Sporting extended their lead at the top after a gutsy win against Braga.

One side flying under the radar is Belenenses SAD, who made it four games unbeaten to creep up to 10th in the table. Their manager Petit is the PortuGOAL Figure of the Week, perfecting his defensive formula once more in overcoming Gil Vicente.

A tenacious defensive midfielder in his playing days, Armando Gonçalves Teixeira a.k.a “Petit”, made the transition from playing to coaching with Boavista back in 2012, helping to guide As Panteras through the choppy waters of the Portuguese 3rd tier before their reinstatement to the Primeira Liga in 2014. There he really cut his managerial teeth by setting up his sides very much in his own playing image, establishing tough to beat, defensively bullish teams to good effect and keeping his team in the division in their first year back.

In doing so he earned something of a reputation for being the go-to man in a relegation emergency, going on to guide Tondela, Moreirense and Marítimo through similarly sticky situations in the years that followed. After leaving the latter team in 2019, he returned to Liga NOS in early 2020 with Belenenses SAD, once more with the primary mission of maintaining top flight status and once more he delivered on this promise.

As already mentioned, Petit’s sides are not necessarily the easiest on the eye but his overall results given the generally constrained scenarios he tends to find himself in are difficult to be argued with. This season has seen him cement a 3-4-3 setup as his favoured tactic for Belenenses SAD, getting men behind the ball and adopting a “do not lose” approach to most matches.

In this sense the manager has good options to choose from, last summer adding the experienced Henrique Buss to an established set of experienced Portuguese defenders like Rúben Lima and Gonçalo Silva. 21 year old Tomás Ribeiro is a talented young player who has attracted significant interest from rival clubs, as is the versatile Tiago Esgaio, brother of Braga star Ricardo. Behind this defence Petit has quite the luxury of two excellent goalkeepers to choose from, André Moreira currently playing second fiddle to Stanislav Kritsyuk.

This season Petit and Belenenses SAD have experienced their share of inconsistencies but recently have quietly put together a very positive run of form, going into their match against Gil Vicente on Monday unbeaten in three matches, including highly creditable draws with Braga and league leaders Sporting.

Gil Vicente away from home were not to be trifled with, the Barcelos side having won at Benfica in their last trip on the road, and Belenenses SAD had a blow in defence having to make do without the aforementioned Silva due to suspension. Otherwise, Petit stuck closely to his favoured formula with the established trio of Miguel Cardoso, Silvestre Varela and Mateo Cassierra leading from the front.

Belenenses SAD were slow out of the blocks at Estádio Nacional however as Gil Vicente took advantage to lead at the break through Pedro Marques, the Sporting loanee pouncing on some slack defensive play from the home side. Petit made an attacking change at half-time, bringing on the promising Francisco Teixeira for Cafú Phete and his switch proved masterful.

Five minutes into the second half Belenenses SAD were level in style, Afonso Sousa firing in a thunderous volley after a corner wasn’t sufficiently cleared.

Kritsyuk was in particularly fine form in the 63rd minute, sprawling across his goal to push Rodrigão’s header against the post and to safety as Gil Vicente dialled up the pressure, Petit’s side forced to ride out some nervy moments in defence.

In stoppage time however Petit’s half-time substitution really paid off. Teixeira collected fellow sub Afonso Taira’s through ball to ram a left-footed shot past Denis for the winning goal.

A fine finish and reward for a gutsy performance from Petit’s improving side.

A boost for Belenenses SAD’s hopes of maintaining their top flight status for next season, opening up a six point gap to the relegation places.

Petit’s sides may lack flair but the sort of output he consistently produces will be envied by many of the clubs below Belenenses SAD in the table at the moment. Amid all of the club’s off-field woes, at least they look like they can count on the Primeira Liga remaining pride of place in Lisbon.

I love yah buddy but Petit has 7 wins and 13 draws, a pathetic 21 goals for. Nacional has 26 goals for and they are dead last.

In a world where offensive football seems to be making a comeback guys like Petit are anchors on that trend....

I love yah buddy but Petit has 7 wins and 13 draws, a pathetic 21 goals for. Nacional has 26 goals for and they are dead last.

In a world where offensive football seems to be making a comeback guys like Petit are anchors on that trend. You could make the arguement the aptly named BSAD are in the position they are in because of the lack of quality up front in Liga NOS sides where it is 100% easier to defend than attack.

Give me Daniel Ramos (Santa Clara) or Paco at Tondela any day of the week over Petit PARK EVERY BUS IN POTUGAL! Someone get the trains as well!! They at least attack until the final whistle and play to WIN, not draw.

This is not an attack on you Jaime, you are awesome.

This IS an attack on Petit however (remember he missed that penalty for Portugal?) lol.

Haha no problem, thanks very much for reading, I appreciate the kind words!

What I would like to know is how these weaker portuguese clubs are surviving through the pandemic and are still fielding teams through all this.... but anyhow glad everyone is out there still playing!!

Petit should have been punished for his comments before the game against Sporting. He said that they wanted to “take Sportings virginity”.

That was really offensive to women who have been victims of sexual assault and was completely...

Petit should have been punished for his comments before the game against Sporting. He said that they wanted to “take Sportings virginity”.

That was really offensive to women who have been victims of sexual assault and was completely inappropriate. Amorim gets suspended for much less.