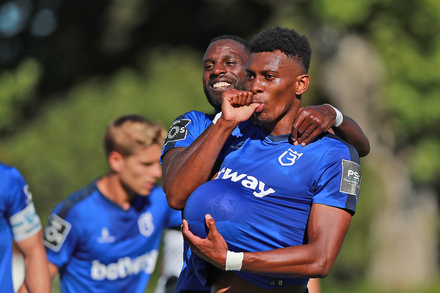 With two rounds of the season remaining Sporting wrapped up their first league title in 19 years thanks to a narrow win over Boavista, keeping their unbeaten run going in the process.

There was cause for celebration elsewhere in Lisbon though as Belenenses SAD secured their Primeira Liga status for 2021/22 in some style, coming from behind to impressively dispatch Tondela at Estádio João Cardoso.

The star man in Viseu was Colombian striker Mateo Cassierra, continuing his recently impressive form with two goals, and he is in focus for this edition of the PortuGOAL Figure of the Week.

Rated as a big prospect in his youth, Mateo Cassierra was signed for a considerable fee by Dutch giants Ajax back in 2016, paying €5.5m to bring him to Europe from Deportivo Cali in his native Colombia. The forward was never able to fully grasp his chances in Holland, moving out on a loan spell to Groningen, as well as a temporary move to Argentina with Racing Club, showing some of his promise on occasions, albeit seemingly without convincing sufficiently for a permanent transfer.

Cassierra cut ties with Ajax definitively in 2019 to sign for Belenenses SAD. After a slow start in his first campaign with the club, he eventually secured a largely regular place in attack although he found goals hard to come by.

Finding the back of the net has been less of an issue this time around though, Cassierra currently sitting on a record of 10 goals from 21 Liga NOS starts. This is a particularly impressive record in the context of the manager’s preferred defensive setup, which Belenenses SAD have used predominantly this season, meaning at times Cassierra has fed off somewhat limited chances at the top of the pitch, however his numbers back up the fact that he has been much more clinical nature in front of goal this season.

Usually the lone spearhead in between experienced wingers Miguel Cardoso and Silvestre Varela, Cassierra’s wiry presence makes him a good mover between the defensive lines, while his pace makes the team a legitimate threat in counter-attacking scenarios.

For Tuesday afternoon’s contest with Tondela, another side looking to secure their permanence in the division, Belenenses SAD had to show character after falling behind very early on to a Mario González goal. Cassierra himself nearly got his team back on level terms in the 12th minute, collecting Cardoso’s pass before being denied by a good save from opposition goalkeeper Pedro Trigueira. Varela converted the rebound before VAR correctly intervened to disallow the effort.

Cassierra and Belenenses SAD were looking sharp though and deservedly got their equaliser eight minutes later. Again Varela and his strike partner combined, the veteran crossing in for the Colombian to bury a header from close range.

Belenenses SAD’s slick attacking play continued and they went into the half time break in front thanks to a penalty from Cardoso. In the second period Petit’s men went about looking to secure the three points and did exactly that just before the hour mark and the goal owed so much to Cassierra. The 24 year old picked Enzo Martínez’s pocket inside his own half, found Varela who then picked out the run of Cassierra, who showed his aforementioned skill on the counter, outpacing the Tondela defence before keeping his cool with a delightful finish over Trigueira.

A terrific end to a devastating counter, the finish of which indicative of the confidence Cassierra has been playing with of late, his second of the game also representing his sixth goal in his last six appearances. The only minor blot on his performance was that this tally should have been even higher, the Colombian spurning a great opportunity to seal a hat-trick late on, perhaps being too unselfish in attempting to find substitute Francisco Teixeira rather than going for goal himself when well-placed in the penalty area.

It mattered not in the context of the match though, Belenenses SAD seeing out the game comfortably to mathematically confirm their top flight status for the season ahead.

Securing that survival was just reward for the efforts a vastly improved player in Cassierra. The centre forward looks to be building on his early promise and will be one to watch next season and beyond.