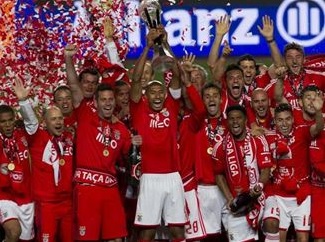 Benfica beat Marítimo 2-1 in a thrilling Taça da Liga final played in Coimbra tonight to complete another memorable season for the Eagles and their coach Jorge Jesus.

A fine Jonas header gave the Lisbon club a first-half lead, and Marítimo looked in trouble when defender Raul Silva was sent off early in the second half.

But the islanders showed tremendous fighting spirit and scored a wonderful equaliser through João Diogo. With a penalty shoot-out looming, Benfica substitute Ola John was the unlikely hero, scoring the winner which gave Benfica their 6th victory in the competition in eight years since it began.

Benfica, despite playing without the injured Salvio, came into the game big favourites having won the two league games between the sides this season 4-0 and 4-1, the latter just last week. But from early on it was clear this was going to be no walkover, Marítimo showing a fiercely competitive attitude from the off.

Early chances at both ends

Gaitán was the first to threaten, shooting over, but Marítimo hit back with Xavier and Danilo coming close to scoring in quick succession. Lima missed a golden chance to open the scoring on 20 minutes when he raced clean through but dragged his shot wide of Salin's goal.

Benfica took the lead in the 37th minute with a well worked set-piece. Pizzi delivered a long diagonal free kick to far post where Jardel hooked the ball back across the box and Jonas produced an accurate header into the corner of the net.

The first half had been a lively affair, but the opening of the second period was absolutely electric. Xavier and Lima both came close to scoring immediately upon the restart, then Marítimo suffered a blow as a reckless off-the-ball tug on Gaitán by Raul Silva resulted in a second yellow card and subsequent red for the Marítimo centre-back.

Ivo Vieira's men refused to lie down however, continuing to implement an aggressive game blended with some excellent passing football, as exemplified when they conjured up a superb equaliser. Substitute Fransérgio threaded a peach of a throughball to find João Diogo, who matched his perfectly timed run with a classy finish past Júlio César.

At that stage it was anyone's game, with Marítimo showing no ill effects of playing with one fewer player.

As the clock ticked down, however, Benfica began to gain a clear ascendency, which was accentuated when Ola John came on and began causing havoc down the left wing. Lima, Jonas and Maxi all missed glaring chances to restore the lead for the Eagles before John took advantage of some skilful play by Jonas to fire into the net from close range in the 80th minute.

Yes a proper final that I really enjoyed watching! Hats off to Maritimo for giving us a good fight, they played well and i was impressed with how they kept it together after going a man down. They've got some good players, I was especially...

Yes a proper final that I really enjoyed watching! Hats off to Maritimo for giving us a good fight, they played well and i was impressed with how they kept it together after going a man down. They've got some good players, I was especially impressed with Danilo and Marega. Good that this was a competitive final for all those (yes including you senor Flopetegui) who think ours is a mickey mouse league where the big 3 simply sweep aside the smaller teams with ease.

In the end it was a deserved win for Benfica though as we created more scoring chances. Great for Ola John to have scored the winner, it wasn't the easiest season for him, a bit stop start, so if he ends up leaving the club this summer at least he can look back at a goal he scored that won us a trophy! He's a player with a lot of potential and I hope he stays, especially as it seems Gaitan will definitely be sold. Jonas was excellent last night as he has been all season long, and to me there isn't even any competition for him for player of the year in Portugal. No player was as consistently good as him nor as decisive overall.

Well its likely to be another summer of activity and uncertainty, will this player stay, will this player go etc etc. Every summer is the same really. But for now, the club and all its fans can all sit back and enjoy a hugely successful end to the season. Considering all that happened last summer, these 2 titles have a really sweet taste!

I ‘m sick as a parrot again, 3 finals 3 defeats and all 3 against the big 3. when will lady luck shine on us? Raúl Silva yet again sent off this season I have lost count if this is his 4th or 5th time that he has received his marching orders.
Well...

I ‘m sick as a parrot again, 3 finals 3 defeats and all 3 against the big 3. when will lady luck shine on us? Raúl Silva yet again sent off this season I have lost count if this is his 4th or 5th time that he has received his marching orders.
Well done lads you gave it a go and let’s hope you can go on a nice run again next season
Forca Maritimoooooooooooooooooo

Read More
paul de'oliveira
There are no comments posted here yet