PortuGOAL Figure of the Week: Carlos Júnior at the double for top six-chasing Santa Clara 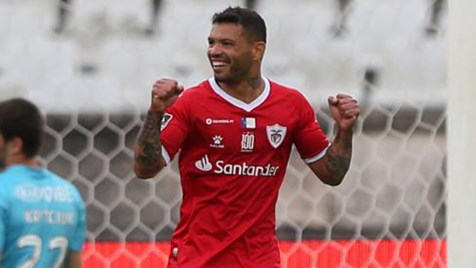 The penultimate round of Liga NOS 2020/21 saw league champions Sporting’s invincibility come to an end at the hands of rivals Benfica in a thrilling Lisbon derby. The Eagles’ win was not enough to stop Porto from claiming a 2nd place finish though, a 3-0 win over Rio Ave compounding their opponent’s relegation worries.

Marítimo rubber-stamped their top flight status for next year with a draw against Vitória Guimarães, while Boavista and Farense boosted their chances of doing the same on the final day of the season, narrow triumphs against Portimonense and Tondela respectively keeping their hopes alive.

One side that has found themselves comfortably distant from the scrap at the bottom has been Santa Clara, who continued their fine season with a 2-0 win over Belenenses SAD. Few doubts about their star man this weekend, as PortuGOAL Figure of the Week Carlos Júnior fired his team to success once more on Sunday afternoon.

Carlos Júnior arrived on Portuguese shores back in 2019 having played for the likes of Internacional and Atlético Mineiro in his native Brazil previously. He signed for Rio Ave in the winter transfer window of that year, but was unable to have the desired effect as he was subsequently sold to 3rd tier side Louletano just a few months later.

However Santa Clara and their then-manager João Henriques had clearly seen something in him as the club immediately signed him on a loan deal that was recently made permanent, a fact that is unsurprising as Carlos has been one of the standout performers in the Azores ever since.

One way in which Henriques and his successor, current boss Daniel Ramos, have got the best out of Carlos is utilising his versatility in the attacking trio. He has led the line on the occasion centrally but it is on either flank that he has looked most effective.

Santa Clara have had a great season but their campaign was made a lot trickier back in December after the departure of their previous top goalscorer Thiago Santana. Carlos took the burden to replace Santana’s goals upon himself though in spectacular fashion, adding a more clinical nature to his game to ensure his team have sat comfortably in the higher echelons of the league table for virtually the whole campaign.

Carlos’ 11 league goals before Sunday’s clash away at Belenenses SAD represented a fine total for a predominantly wide player at a team like Santa Clara and he increased his total to 13 in said match after delivering yet another fine performance.

Carlos was off the mark as early as the 9th minute at Estádio Nacional, confidently dispatching from the penalty spot after Belenenses SAD’s Tiago Esgaio had been penalized for handball.

Carlos then thought he had registered an assist for his strike partner Cryzan minutes later, but the Brazilian had collected Hitemasa Morita’s through ball from a narrowly offside position.

Santa Clara extended their lead on the hour mark as Carlos grabbed his second of the afternoon. Cryzan turned the provider this time, winning the ball high up the pitch before pulling back for Carlos to swivel and shoot, his effort initially parried by goalkeeper Stanislav Kritsyuk before the ball squirmed into the net.

Santa Clara held out to record consecutive Liga NOS victories, and tighten their grip on 7th place in the table.

Santa Clara could yet finish as high as 6th this season and Carlos Júnior has to take a considerable slice of the plaudits regardless of their final placing. It’s been another year of excellent individual highlights in Portugal and the 25 year old Brazilian ranks right up there with the top performers, even if he has somewhat flown under the radar in doing so.