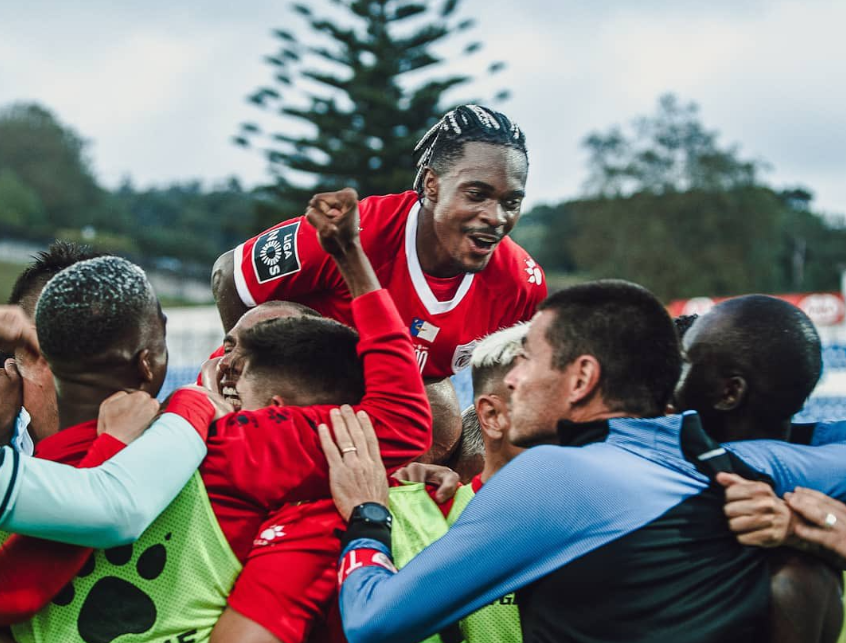 Santa Clara have guaranteed European football for the first time in their history after qualifying for the Conference League with a 4-0 victory over Farense, relegating the men from Faro on the final day of the Primeira Liga season.

The side from Azores took full advantage of Vitória de Guimarães’ 3-1 defeat to Benfica to leapfrog them into 6th place with a comprehensive win on Wednesday night, gluing Farense to 17th place.

In the free-for-all for safety, Rio Ave left it late to defeat the relegated Nacional 2-1, but will have to contend with a relegation/promotion play-off against either Arouca or Vizela from the Liga Pro, after Boavista secured their stay with a 2-1 win over Gil Vicente and Portimonense held Sporting de Braga to a goalless draw.

Elsewhere, the Primeira Liga the champions, Sporting, put on a show at the Alvalade with a 5-1 triumph against Marítimo, but not before FC Porto signed out by putting four last Belenenses at the Dragão.

The 2020-21 season in Portugal has been filled with thrills and spills as usual. What will happen next year? If you are confident in your ability to predict how the Primeira Liga will pan out, visit the best betting sites and put your knowledge to profitable use.

In a must-win for Farense, sitting in 17th place, level with 16th-placed Rio Ave and three points from safety, victory for Jorge Costa’s team would also mean souring Santa Clara’s season, in hot pursuit of a European Conference League spot.

The night commenced with the visitors hitting the crossbar through Fabrício Isidoro before Santa Clara piled the misery on the Lions from Faro, with Cryzan tapping home in the 33rd minute.

An assist and a goal for Allano either side of the half-time interval, assisting Hide Morita before tucking home himself had Farense facing relegation at 3-0.

Carlos Junior placed the game beyond any doubt for Santa Clara in the 63rd minute, making it 4-0 to confirm the drop for their opponents and securing European football for the first time in the club’s history, after overtaking Vitória.

In a game with potentially huge implications for Rio Ave, against an already-relegated Nacional side, Miguel Cardoso’s men were out in hope that they could steer clear of 16th place, requiring an additional promotion-relegation play-off, meanwhile the threat of an automatic demotion to the Liga Pro still existed.

Despite a positive start for the Vilacondenses, the nightmare commenced for the visitors as early as the 11th minute, as Dudu placed Nacional ahead at the Choupana. Rio Ave’s response came via Ryotaro Meshino, striking the post before Ivo Pinto saw his rebound stopped by Antonio Filipe, concluding the first half at 1-0 to Manuel Machado’s team.

The response in the second half came in good time from Rio Ave, equalising in the 51st minute via Aderlan Santos’ glancing header. Emotions ran high in the final moments of the clash after Gelson Dala was denied a late penalty and Junior Brandão’s miss from a prime position left the visiting side in despair.

Rio Ave’s goal eventually came deep in stoppage via a Carlos Mané header at the back-post, but it wasn’t to be enough to catch either Boavista, or Portimonense, as await their promotion/relegation play-off.

Sitting just a couple of points above the drop zone, Boavista were in grave danger of taking the plunge into the second division with the wrong result away to Gil Vicente on Wednesday night.

Talocha threatened for Boavista before it all swung the hosts’ way, edging closer to the opener through Pedro Marques and Samuel Lino prior to the latter’s spot-kick in the 36th minute, putting Gil Vicente ahead.

The side from Barcelos continued to show the visitors up in the second period before Yusupha’s goal against the run of play, heading from from Alberth Elis’ delivery and equalising for Jesualdo Ferreira’s outfit in the 56th minute.

Worries came rushing back for ‘the Black Panthers’ when Adil Rami clipped Pedro Marques inside the box, awarding the hosts a penalty, but it wasn’t to be for Samuel Lino, denied his brace by hitting the post.

The watre's current turned fully in Boavista’s favour by the 88th minute after Paulinho earned his side a penalty against Gil Vicente. Yusupha stepped up to the mark before squeezing in a crucial second for his side, granting Boavista their stay in the Primeira Liga with a 2-1 win.

With Benfica’s eyes more or less on the weekend’s Taça de Portugal cup final versus Braga, Vitória were hoping to take advantage of the sweeping changes made by Jorge Jesus and secure a European Conference League spot, coveted also by Santa Clara.

Benfica struck first, however, and it came from the habitual source of Seferovic, set up by Darwin Nuñez’s cross before finishing in the 48th minute.

Just ten minutes later, Seferovic bagged his 22nd league goal of the season with head before Jorge Fernandes clawed a goal back for the Vimaranenses in the 63rd minute. The killer goal fell to Everton Cebolinha, however, securing all three points for Benfica in the 91st minute and limiting Vitória to a 7th-placed finish.

Out for one final time, this season, Sporting were in search of a memorable occasion at home to Marítimo to round off a remarkable title-winning campaign, fuelled by Pedro Gonçalves’ hunt for the golden boot, up against Benfica’s Seferovic.

The game’s opener almost came from the unlikeliest of sources as a clean Antunes volley from outside of the box struck the underside of the bar just two minutes in. It would be Pedro Gonçalves after all to break the deadlock after eight minutes, placing Jovane Cabral’s cutback before scoring a second time in the 20th minute.

Matters got worse for Marítimo, going 3-0 down straight after resuming play from kick-off as Charles provided the clanger from Andreas Karo’s pass-back, rolling under his foot and into the back of the net.

The all-important 23rd goal of the season for Pedro Gonçalves came in the 62nd minute, latching onto a Jovane through ball to seal his first hat-trick of the season by poking the ball past Charles, affirming the ex-Famalicão man as the Primeira Liga golden boot winner.

Sporting added a fifth via Gonzalo Plata after Charles attempted to clear his lines from a speculative pass, aimed at Pedro Gonçalves, with the ball falling to the Ecuadorian wide man prior to his accurate lob floating into an empty net in the 71st minute.

Stefano Beltrame picked up the last goal of the game, and the season, to couple the 2020/2021 curtain-call with a 5-1 score-line in favour of 'the Green & Whites'.

In the final outing of the season for the runners up, Porto had their focus set on exiting the season with a victory at home to Belenenses. The game started positively for the Dragons, catching out Silvestre Varela for Mehdi Taremi’s first before Marko Grujic, in the 14th minute, doubled Porto’s lead.

Sérgio Conceição’s men were quick to prey on a Belenenses mistake once more coming into the second half, with Toni Martinez racing through on goal from a loss of possession to land a third in the 50th minute.

Diogo Leite closed the accounts with nine minutes to go, rising highest from a set-piece to head in off the crossbar.

Despite ranking highest among those at risk of dropping, the 14th-placed outfit were tasked with performing against perennial top-three dreamers Braga in southern Portugal.

Inspiration appeared to be at an all-time low at the Estádio Municipal de Portimão, however, as both sides traded tame efforts at goal en route to a goalless first half.

Portimonense grew in confidence, totting up the saves for Braga’s Tiago Sá between the sticks. Eventually, the hosts would find no way through, nor would they need to, as a goalless draw confirmed a 14th-placed finish, in addition to Marítimo’s loss to Sporting.

I'm not very optimistic about the European campaign the next season. It would be a huge achievement if Pacos and santa clara would qualify for Europa League and in champions league if all three teams qualify, chances are one will take the fourth...

I'm not very optimistic about the European campaign the next season. It would be a huge achievement if Pacos and santa clara would qualify for Europa League and in champions league if all three teams qualify, chances are one will take the fourth place in the group (Benfica or sporting) and the others will struggle to fight for third place.

Read More
Samuel
There are no comments posted here yet