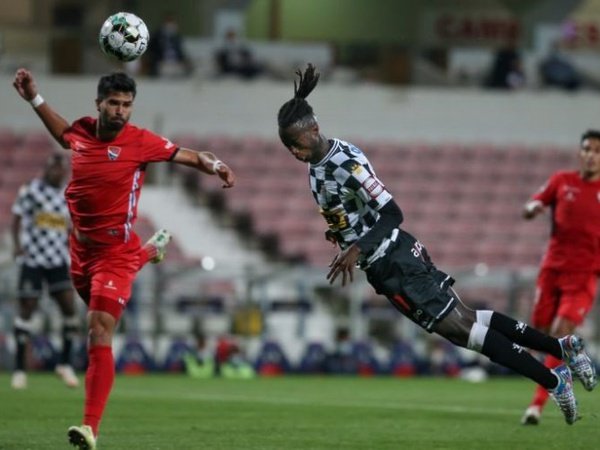 The curtain fell on the 2020/21 Liga NOS season yesterday in a jam-packed day of matches. Matters at the top of the table were already done and dusted so the attention was largely on the middling and lower areas of the league.

In the former category Santa Clara achieved a European place, leapfrogging Vitória Guimarães who came up short against Benfica.

The real drama was in the relegation battle though with four sides battling the drop. Farense ultimately joined Nacional in descending to the second tier, with Portimonense surviving and Rio Ave finishing in the play off spot.

The fourth side in question was Boavista and they dramatically survived the drop in a terrific comeback victory. The hero of the hour was substitute Yusupha Njie, his goals securing survival and also his status as the final PortuGOAL Figure of the Week of the campaign.

This season Boavista’s squad took in a big influx of players after a cash injection to the club, previously unachievable names like Angel Gomes and Adil Rami to the playing staff. By comparison, striker Yusupha Njie is something of a veteran at the club having arrived back in 2018, the 27 year old signed from the obscurity of FUS Rabat in Morocco having previously played in his native Gambia.

It’s been a difficult campaign for Njie, reflecting his team’s struggles. After starting the opening game of the season against Nacional, the striker was subbed off with only 13 minutes played with injury to miss the following three matches. Upon his return, Njie soon found himself restricted to substitute appearances under then-manager Vasco Seabra, who in turn was later axed at the helm as Boavista occupied the relegation places amid a series of poor results on the pitch.

Seabra was replaced by the hugely experienced Jesualdo Ferreira in December, but Njie’s fortunes didn’t fare too much better in the limited opportunities he was given, as well as the Gambian being struck down with another injury for the month of March.

However upon his return to fitness, scoring three goals in two games to help his side to a vital four points against Rio Ave and Paços Ferreira. Still his manager did not appear suitably convinced despite Njie’s obvious goal threat, as he has been limited to a bench role once more during the run-in as the team have desperately battled relegation from Primeira Liga.

This didn’t stop Njie from grabbing the headlines on the final day of the league season however, arriving when his team needed him most. In Wednesday’s trip to Gil Vicente, Boavista found themselves a goal down and needing a result to stay up, and to make matters worse they lost arguably their best player in Angel Gomes to injury just before the break.

Enter Njie as the Gambian came onto the field and in the second half turned the game on its head. In the 56th minute, Honduran winger Alberth Elis did brilliantly to win the ball high up the pitch and deliver a dangerous cross into the penalty area, where Njie was lurking to power a fine diving header past Gil Vicente goalkeeper Denis to level the scores.

Boavista looked a much more fluid and dangerous unit as Njie provided the team with a genuine focal point in attack, and he began to link very effectively with Elis in particular. The pair combined in a similar fashion to the goal in the 67th minute, Njie again rising to power a header but this time it was too close to Denis.

After surviving a missed penalty from Gil Vicente, Boavista sensed their opportunity to go on and win the game and confirm their league status, irrespective of results elsewhere. Another slick attacking move was almost finished off for his second by Njie with 12 minutes remaining, his shot from Reggie Cannon’s cut-back flying just wide of the post.

It felt like it was Njie’s destiny to score and he would do just that with minutes of the match remaining. Paulinho’s run into the box was halted by a foul, and Njie stepped up to take the pressure penalty. His strike wasn’t the cleanest, stumbling after he took it but the ball snuck into the net off the post for the winning goal.

A massive moment in Boavista’s recent history, the players and staff’s obvious combination of ecstasy and relief was palpable at the final whistle.

In many ways the game summed up Njie’s season, in that he did not have the opportunity to affect the game to begin with but once his chances arrived he was decisive to his team’s fortunes. It says a lot that standout players like Elis and Gomes only were only ahead of Njie’s goal tally for the year by three and one respectively, despite the pair seeing significantly more time on the pitch than the Gambian forward.

The end of the Liga NOS campaign also of course means the conclusion of the PortuGOAL Figure of the Week feature for another year, thanks for reading and see you again next season.