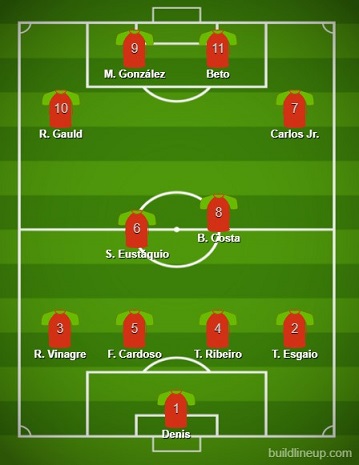 So we thought we would compose the Liga NOS 2021/22 team of the season made up of players exclusively outside of that quartet, highlighting the many exceptional performers up and down the country during the campaign.

Here is the PortuGOAL effort, going for an attacking 4-4-2 formation.

It was a very tough pick. Let us know your own versions in the comments below.

The definition of a mercurial goalkeeper, Denis has not been without his mistakes this year but they have been out-weighed with a series of sensational stops throughout the campaign to ensure Gil Vicente never really got too involved in the relegation dogfight as some predicted they would. His excellent reflexes can scarcely be summed up better than his record of 4 penalties saved during the league season.

A consistent and underrated performer in the Liga NOS season. Mostly playing in more of a right wing-back role, he helped contribute to one of the best defensive team records in the league. He also showed a bit more versatility to his game this year, occasionally dropping into centre-back and looking very capable of doing so. His performances have been recognised with an already-confirmed move to Braga where he’ll link up with his brother Ricardo, or potentially even replace him.

An inspired winter transfer window signing. The 22 year old Portuguese full back showed plenty of promise with Wolves in the Premier League, but struggled in a loan spell with Olympiacos. Enter Famalicão, who were having considerable troubles of their own but Vinagre quickly made the left back slot his own and was hugely responsible for his team’s reversal of fortunes. His attacking skill made Famalicão a far more dangerous proposition for the opposition, while his defensive game showed signs of improvement too. Like many on this list, expect to see him at a higher level next year.

As mentioned with Esgaio, Belenenses SAD’s defensive performance was terrific this season, their 35 goals conceded only bettered by the sides from the top four. A graduate from their U23 division, Ribeiro really matured on a personal level this season, eradicating some of the mistakes that occasionally blighted his game in his youth to become a rock solid centre back who looks capable of improving further. The 22 year old looked set for a January move to Vitória Guimarães before the deal collapsed. They'll likely be back in for him this summer and on this season’s evidence they won’t be alone in the queue.

A former Benfica youth player, as well as a stint with Scottish champions Rangers in his past, Cardoso’s brilliant defensive displays as a mainstay at the heart of the Santa Clara defence were very pertinent to his team’s qualification for Europe this season. Alongside Mikel Villenueva, another contender for a place in this team, he set up a barrier that was rarely penetrated, with only Belenenses SAD having a better goals against record for non-top four teams.

Arguably the finest midfielder outside the top four in the campaign. Eustáquio had previously impressed at this level with Chaves, forming the basis of Pacos acquiring him from Mexican side Cruz Azul and the Canadian international has put some serious injury woe behind him to recover his best form and then some. Calm and composed in possession and a gifted technician when using the ball, Eustaquio is destined for bigger and better things. As a highly-skilled ball-playing defensive midfield he’ll be in serious demand this summer.

Bruno Costa too has had an exceptional campaign to help his team to the superb 5th place finish they achieved. Signed on loan from Portimonense last summer, Costa seamlessly slotted into Paços’ midfield trio alongside Eustáquio and veteran Luiz Carlos as a virtual ever-present in the XI, his “all rounder” qualities helping Os Castores qualify for Europe and also convincing his boyhood club Porto to reportedly be on the verge of bringing the 24 year old back home for 2021/22.

Perhaps flown under the radar somewhat but Carlos Júnior only seems to be getting the recognition he deserves in recent weeks following a superb season. The big boys are unsurprisingly circling after the winger registered 14 Liga NOS goals to help Santa Clara to European qualification. A wide-man with an eye for goal is a vital commodity in any league, and the Azores side will struggle to keep hold of one of their prized assets.

It’s not often that a relegated team could have a candidate for the league’s player of the season award, even if we are including the top four teams. The Scottish wizard won the most man of the match awards in the campaign and deservedly so, almost single-handedly dragging Farense to survival upon their return to the top flight before just falling short on the final day. Gauld’s technical mastery has not been a secret for seasoned observers of Portuguese football, but his leadership qualities and decision-making on the pitch were underrated elements of a magnificent individual year which should have resulted in a place at this summer’s European Championships. Despite his team’s descent to the second tier, there’s no chance his talents will be on display at anything lower than the Primeira Liga once more in 2021/22.

A stunning breakout year for the young striker. After playing a bit part for much of the campaign, showing flashes of his quality on occasion, the 23 year old exploded earlier in the calendar year with a series of relentless attacking performances, 11 league goals in 21 starts seeing his team to safety and his own personal value skyrocket. Quick, strong and a good finisher, the Lisbon-born forward is reported to be on Benfica’s shopping list, a meteoric rise given only 18 months ago he was in Portimonense’s U23 squad.

Sheer numbers-wise he was simply the best striker in the division outside the top four. His 15 league strikes were not bettered by any player within the aforementioned parameters, and the Tondela striker had to push through some considerable early season injury issues to do so. Once fully fit, the Spaniard showed he was capable of scoring all manner of goals to ensure the Auriverdes had a far more serene survival than they are used to. League champions Sporting are rumoured to have taken a keen interest in his services, and it’s not hard to see why.

I'm not sure how tactically sound would this formation be ?, but the pick of the players is pretty spot on.

Pretty good team, and if Sporting don't try to sign him back, they are fools. Though if Porto poached him, I'd be pretty happy.

Pretty good team, and if Sporting don't try to sign him back, they are fools. Though if Porto poached him, I'd be pretty happy.

For me, Eustaquio has also been stupendous, really effective player in his position and a big reason for Pacos' success this season.

Ryan Gauld...expect a move for him. He definitely earned it this year. The man got his O.W.L.’s in midfield wizardry this year.