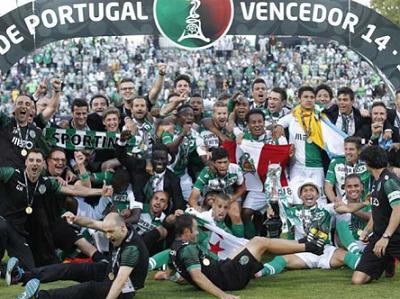 Sporting won the Taça de Portugal at the Estádio do Jamor on penalities in one of the most dramatic Portuguese cup finals in recent memory.

Goals from Éder, after Cédric Soares conceded a penalty and was dismissed, and Rafa Silva gave Braga the advantage after just 25 minutes but two late strikes from Islam Slimani and Fredy Montero took it to extra time, then penalties.

Sporting scored all of theirs, but a Rui Patrício save and 2 misses from Éder and Salvador Agra gave the cup to Sporting.

Having looked dead and buried Sporting will feel like they won the jackpot. At ku casino anyone can also go for the big prize.

Marco Silva picked what was arguably his strongest side over the course of the season, a defence of Cédric Soares, Ewerton, Paulo Oliveira and Jefferson with a front 3 of Nani, André Carrillo and Islam Slimani.

Braga manager Sérgio Conceição made just one change from the Braga team that thrashed Vitória de Setúbal 5-0 on the final day of the season with Mauro replacing Alan, who began from the bench.

Sporting began the final with the better of the ball but it took just 14 minutes for everything to collapse for the Lisbon team. When Djavan surged forward on the counter-attack leaving Paulo Oliveira in his wake, Cédric Soares fouled him in the area and Marco Ferreira awarded a penalty to Braga. Cédric, as the last man and preventing a clear goal-scoring opportunity was given his marching orders.

Éder, winner with Académica here back in 2012 against Sporting, stepped up to take the penalty. He sent Rui Patrício the wrong way to give an unexpected lead to the visiting side that were soundly beaten 4-1 at the Alvalade just a few weeks ago.

Things went from bad to worse when Cédric Soares replacement, Miguel Lopes, who came on in the place of João Mário after the sending off, was beaten for pace by Rafa Silva. The winger, completing an excellent season with the club, finished calmly through the legs of Patrício to put Braga 2-0 up after just 25 minutes gone in the 2015 Taça de Portugal final.

After the break, Conceição’s team-talk seemed to have helped as the Arsenalistas started to recover more of the ball. Indeed, Éder almost added a third for Braga when Rui Patrício pushed his curling effort from outside the box over the bar.

Sporting showed great heart and spirit despite rapidly running out of time with inferior numbers. Nani forced a diving save out of Stanislav Kritciuk when he cut inside and attempted with his own curling effort in the 70th minute.

Marco Silva, running out of time, threw on Fredy Montero for substitute Miguel Lopes as Sporting desperately tried to claw their way back into the game.

The coach was rewarded on the 84th minute when Stanislav Kritciuk was completely out of position allowing Islam Slimani to slot home past the Russian’s outstretched arm to breathe new life into the final.

When the fourth official indicated 6 minutes of stoppage time it no doubt gave a huge psychological boost to Sporting and, in the 93rd minute they got the leveller. A route one ball from Paulo Oliveira flew over the heads of the Braga defence, and substitute Fredy Montero scrambled the ball past Kritciuk in dramatic style to take a breathtaking game into extra time.

Though physically Braga seemed better prepared for the second half with an extra man, the attitude of Sporting seemed to give them the edge going into the final 30 minutes.

Sporting had the best chance of the first half of extra-time when Nani, again with a curling shot after having cut inside, narrowly missed the top corner of the Braga goal.

In the second half, Sporting’s tiring legs were far more evident and it seemed Braga were the more likely team to prevent the game from going to penalties. When, in the 110th minute, Rui Patrício went down injured, it seemed like everything was once again swaying Braga’s way.

It almost did, substitute Salvador Agra broke through the Sporting defence but the injured goalkeeper made an excellent save to deny the winger.

When Mauro picked up his second yellow card of the day, evening out the number of players on each team for the first time in 100 minutes, the game seemed destined to go to penalties.

It would be substitute Alan to step up first and he fired his penalty past the injured Patrício. Next, Adrien Silva’s penalty was unstoppable, aimed in the top left-hand corner just under the bar. Then, however, André Pinto’s penalty was saved by the diving Rui Patrício and when Nani calmly converted the next, Sporting had the advantage in the game for the first time.

Éder stepped up, and despite having scored a penalty in the first half, this time he hit his effort miles over the bar. Then Slimani, who had given Sporting a fighting chance to get back into the game, converted for Sporting.

At 3-1, it was essential for Salvador Agra to score, but he could be no saviour as he sent his penalty wide of the goal to give Sporting the Taça de Portugal and their first major trophy since 2008.

Sérgio Conceição was gracious in defeat, providing no excuses despite failing to capitalise on the huge advantage they had early on in the game. Sporting, through the heroics of Islam Slimani, Fredy Montero and especially Rui Patrício will celebrate through the night.

I listened to the RDP transmission with such hope, then dispair when it was 2-0. Then the two goals, and finally penalties. It has been hard as a Sporting fan these past years.

WHAT A GAME!! Incredible turn around in that game , being a man down and two goals down. This really was showing the true lionheart spirit of Sporting! I think this is a very important pivotal moment in this BdC era of Sporting because they have...

WHAT A GAME!! Incredible turn around in that game , being a man down and two goals down. This really was showing the true lionheart spirit of Sporting! I think this is a very important pivotal moment in this BdC era of Sporting because they have been working well constantly going forward, but in the big clutch moments to be honest we have come up short a bit sometimes, but this was it! We showed up and fought like mad to win this! This all would spark that winning spirit in the squad and from here on they can go on and win more!

Credit to Marco Silva as well, he came of age this season truly I believe, it wasn't easy he had pressure but i believe this all made him stronger, and he managed the team really well in the game. It was a very tricky situation being at such a disadvantage but the subs he made helped keep balance in the team while still providing attacking threat and it paid off! Sporting have't won a trophy in forever and he has been the manager to deliver it so big respect to him! This has made him stronger and he will shine with his management talent even more now as the whole squad too will have this spirit and hunger to win!

Big respect to BdC again, as he has continued to show that with him Sporting get better and better and he has brought back Sporting to being a true great team. Second place last season, 3rd place this season with a decent showing in CL, and winning the Cup this season. The aim can now be to push on and win more next season! Very proud of our club Sporting Clube de Portugal!!!!

Read More
Edward Pegus
There are no comments posted here yet