Sporting come from behind to lift Super Cup 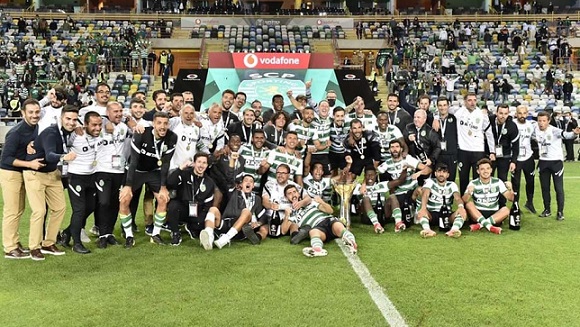 Portuguese champions Sporting started 2021/22 as they finished the previous campaign: with that winning feeling. Braga began the Supertaça season curtain-raiser strongly and took the lead through Fransérgio, but Jovane Cabral equalised soon afterwards.

A magnificent finish by Pedro Gonçalves shortly before half time proved the winning goal as Sporting lifted the first piece of silverware of the new season.

As in several countries, Portugal officially kicks off its football season at the highest level with a match between the previous term’s league champions and cup winners. This year’s offering in the northern city of Aveiro was especially keenly anticipated as spectators were let back into the stadium (33% capacity) after an entire season of fan-less matches owing to the Covid-19 pandemic.

Braga began well, pressing Sporting furiously, pinning the Lions into their own half and not allowing the midfield duo of João Palhinha and Matheus Nunes to settle, the former picking up an early yellow card. Carlos Carvalhal’s team were rewarded for their bright start when Ricardo Horta’s delightful chipped pass caught out Sporting’s defence, with Fransérgio skipping past the exposed Gonçalo Inácio and firing a low shot into the bottom corner of the net from the top of the box.

The setback saw Sporting finally spring into action, and the Lisbon side were soon level. The excellent Nuno Mendes threaded a low curling long-range pass into the path of Jovane Cabral, who outsprinted Braga centre-back Paulo Oliveira and produced a cool finish under goalkeeper Matheus. Half an hour gone, 1-1.

Sporting had now wrested control of the match from their opponents, and more brilliantly incisive wing play by Mendes – who was irreprehensible in his defending and attacking duties all night – set up Pedro Gonçalves, who was denied by a super sprawling save by Matheus.

Pote, last season’s top scorer in Portugal, was not to be denied for long. Sporting’s midfield duo were now dominating the centre of the pitch. Palhinha headed a clearance to Nunes, who looked up and immediately lifted a looping pass to Gonçalves, who took the ball down before sending a spectacular angled shot arrowing into the top corner of the net with the outside of his right foot. The whistle blew for the interval and Rúben Amorim’s men were leading.

The 23-year-old Gonçalves enjoyed a sensational debut season for Sporting, coming top of the goalscorer list in the Primeira Liga and it appears he has no intention of slowing down. The strike against Braga comes on the back of scoring an excellent goal, also with the outside of his right foot, in Sporting’s final preseason friendly against Lyon last weekend.

A second-half reaction would be expected from Braga, but truth be told Sporting controlled the next 45 minutes with surprising serenity.

Pote tested Matheus, Jovane skimmed a low effort narrowly wide, and Gonçalves missed a glaring chance with Matheus out of position and Nuno Santos wide open, but it did not matter as Braga completely failed to trouble Antonio Adán in the Sporting goal.

Carvalhal brought on 15-year-old Roger Fernandes for the last 20 minutes and another highly-reputed young forward Vítor Oliveira, but there was no way through a rock solid Sporting back line.

Sporting will begin the defence of their championship crown next weekend in good heart.

Sporting should have made it 4 or 5 goals to Braga's single goal. Braga after they scored just vanished completely, never looked like they were going to score another one.

Congratulations to Sporting. Completely earned this victory and their is no room for debate on that one.

Some real well taken goals in this one, delight to see.

I still wonder why Santos didn't give the Liga top scorer a chance when we really needed a proven finished against Belgium. I know he only had a few choices to make, but still. The only other proven scorer was Andre Silva. For example, why Sergio...

I still wonder why Santos didn't give the Liga top scorer a chance when we really needed a proven finished against Belgium. I know he only had a few choices to make, but still. The only other proven scorer was Andre Silva. For example, why Sergio O vs putting in Pote?

OK, then I am all on board with JJ and Sergio C. as co-managers. Sure it won't work, but the train wreck would be worth it! If we aren't going to win, might as well have fun on the ride.

First of all, you need to sign my petition to make it happen.

Secondly, you need to believe dammit. If you don't believe in the JJ-Conceicao axis, then it won't work!