Sporting down Braga between successive victories for Benfica and Porto 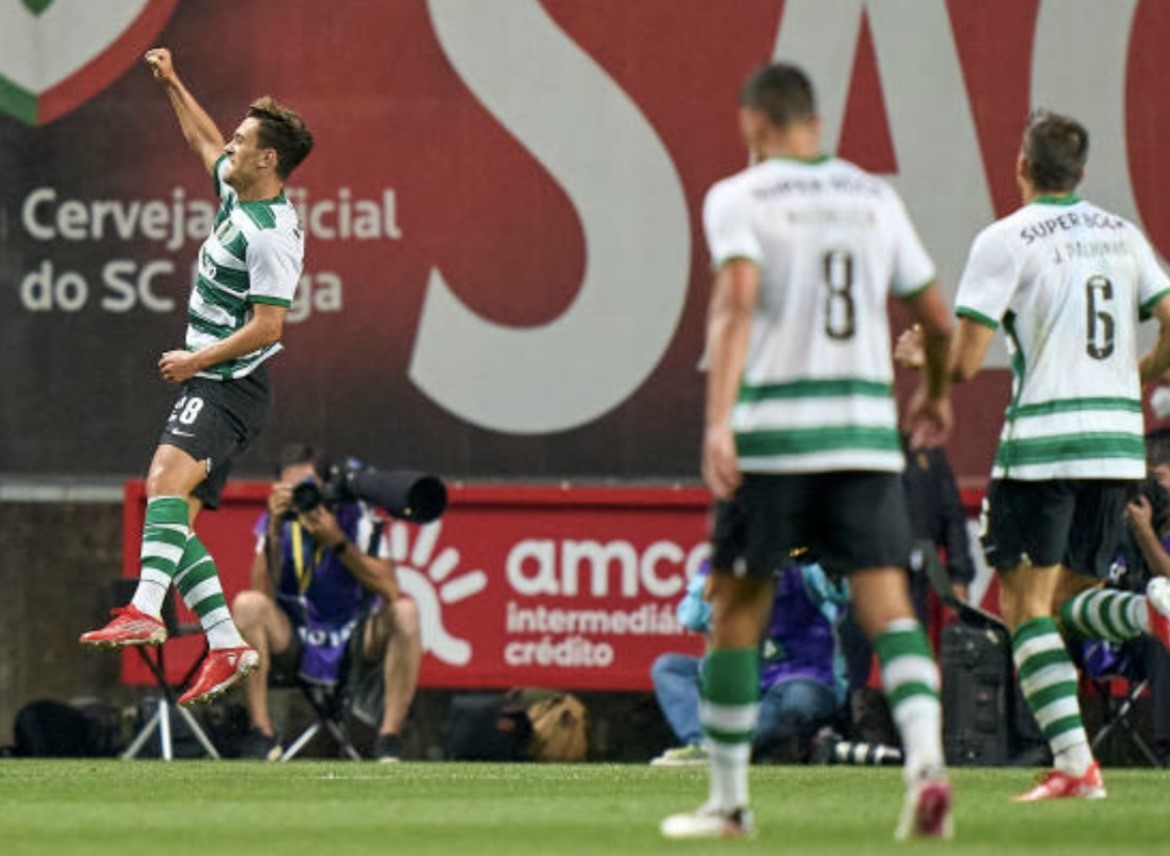 Sporting have followed up their opening-day win against Vizela with a second consecutive victory away to Sporting de Braga, defeating the Arsenalistas 2-1 in this weekend’s main event.

The Lions had their noses in front after Jovane Cabral’s first half breakthrough was later doubled by man-of-the-moment Pedro Gonçalves, treating Rúben Amorim’s men to a 2-0 lead in the first half. A red card for Matheus Reis and Abel Ruiz’s first goal for Braga this season threatened to undo all of that, however, but the title holders held on to win by a slender margin.

Prior to the clash up north, Benfica welcomed Arouca for their first league game at the Estádio da Luz, coasting past the newly-promoted side, who were reduced to ten man early, with a 2-0 victory. The recipe was later copied and pasted by FC Porto on Sunday evening, claiming an important set of three points away to Famalicão with two goals from Toni Martinez in a 2-1 win.

After joy for Amorim’s men in the Supertaça, the Portuguese season’s traditional curtain-raiser, Braga we’re out in hope of avoiding renewed disappointment against their former boss, seeking a second set of three Primeira Liga points.

In a tight affair, Jovane Cabral’s diving header in the 40th minute proved to be the only difference between the two Sportings going into the break, as the Lions led 1-0.

Sporting resumed the hunt for more goal joy in the second half, going close from Gonçalo Inácio’s header from a set-piece before Pedro Gonçalves picked his spot with a well-placed finish in the 50th minute.

A second yellow card for Matheus Reis was coupled by a 91st minute goal from Abel Ruiz, ramping up the pressure on ten-man Sporting and their 2-1 advantage. The Primeira Liga champions were able to stand strong in defence, however, making it back-to-back wins in as many games at the start of the season.

Upon European success against Spartak Moscow, pending an additional test against PSV Eindhoven in the preliminary UEFA Champions League qualifiers, Benfica had their eyes on resuming a positive start to the season with a potential home victory against Arouca, with new boy Roman Yaremchuk leading the line.

The Ukrainian striker had his fingerprints all over the first real talking point of the game, taking the ball around Victor Braga before the goalkeeper’s intervention with his hand, originating outside of the area, resulted in an 8th-minute red card for the Arouca shot-stopper.

Benfica threatened through Gian-Luca Waldschmidt’s free-kick soon after, hitting the bar, but it wasn’t until the 38th minute, via the German forward himself, that the Eagles found themselves a goal up.

Both Waldschmidt and Gonçalo Ramos scuppered huge opportunities the increase the margin on the score-line, ensuring that Yaremchuk’s first goal for Benfica, on an evening dominating by the Lisbon giants, would be the last of the night.

Following the successes of Sporting and Benfica before them, the pressure was on Porto to keep up with the leaders of the pack and match their rivals with a second victory of the season, as they made the journey to Famalicão.

It took the Dragons just 13 minutes to find the back of the net, via former Famalicão man Toni Martinez, before the Spaniard broke the hosts’ hearts once more on the brink of half time with a powerful finish to register a 2-0 score at half-time for Porto to boast about.

Riccieli halved Sérgio Conceição’s men’s advantage with a diving header in the 55th minute, setting up a dramatic finish to the encounter, concluded with Bruno’s 94th minute equaliser for Famalicão that was later chalked off by VAR for a 21 centremitre offside call.