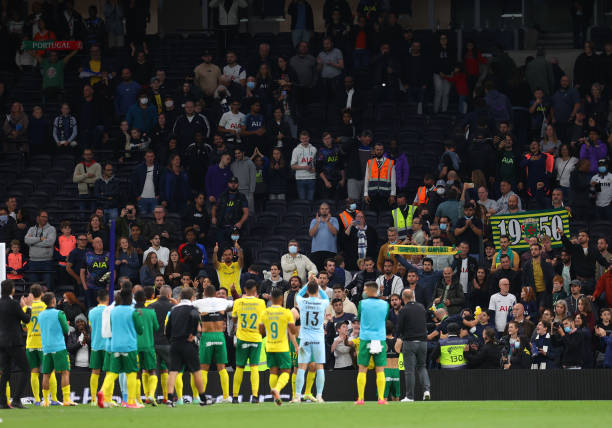 Paços de Ferreira and Santa Clara have seen their European dreams come to an end after losing to Tottenham Hotspur and Partizan Belgrade in the Europa Conference League qualifiers, this Thursday.

Holding onto a slender 1-0 advantage from the first leg, Paços saw their opponents reply with three goals of their own back on English shores, including two from Harry Kane, in a successful night for Spurs boss Nuno Espírito Santo.

Santa Clara also had hopes of defending their 1-0 lead ahead of their travels to Belgrade to face Partizan, but two first-half goals from the Serbian outfit shattered the fairy-tale to confirm a double-elimination for the two Primeira Liga hopefuls.

In North London, Spurs came out with their big guns as they hosted Paços, with Kane, just a day after confirming his stay at the club, making his first start of the season versus Jorge Simão’s team.

The man hogging all the attention kept the spotlight on him with a well-taken finish in the 9th minute, before doubling Spurs’ lead moments before the half-time interval.

There was to be a Portuguese goal but, unfortunately for Paços, in the wrong net after Vitorino Antunes added to Kane’s brace by making it 3-0 with an own goal, sending the hosts clean through to the Conference League group stage.

After the clash, Simão held his hands up when talking about the effect Kane had on the tie, stating that “he’s one of the best strikers in the world, so there’s no doubt he tipped the balance of the game.”

Just as hopeful of a greater taste of European football were Santa Clara, in action against Partizan with a 1-0 lead from the first leg hanging over the tie. That lead was matched in the 25th minute, as ex-Nacional da Madeira forward Ricardo Gomes levelled things on aggregate via the penalty spot.

Partizan soured things quickly for the outfit from Azores, taking the lead just two minutes later from Siniša Saničanin’s finish. Stunned by the two-minute salvo, Santa Clara were left unresponsive, joining Paços in their elimination from the Conference League.

Santa Clara boss Daniel Ramos offered a moment of reflection after the game, citing his team’s dominant display in the first leg before declaring the pride he holds in his players after such a run in Europe.

“It was an even tie - Santa Clara was the best team in the first leg, Partizan was better in the second,” Ramos said. “The one goal advantage in the first leg was unfair, we deserved more goals, and that ended up being decisive.”

“But I’m proud to be the manager of these players and it’s not because we failed to progress today that we’re not considered a big team.”