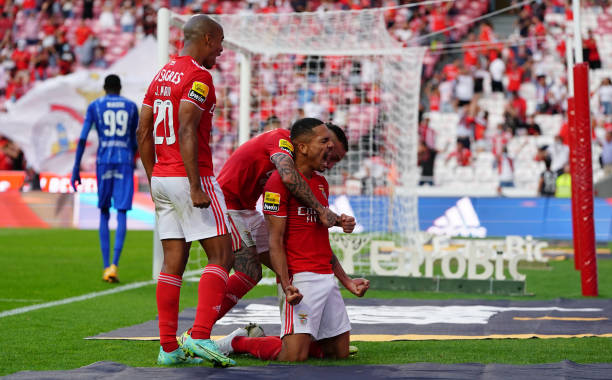 Benfica have moved up to first place in the Primeira Liga table after a late Gilberto winner versus Tondela saw the Eagles take advantage of a Sporting slip-up with a 2-1 victory, this Sunday.

At home, Jorge Jesus’ men were forced to come from behind after a first-half goal from Salvador Agra set Tondela on course for a huge early-season scalp.

Two goals in the final 20 minutes of the 90 turned the tables on the northern outfit, however, maintaining Benfica’s 100% win ratio in the Primeira Liga and opening up a two-point advantage over their rivals, Porto and Sporting.

Beforehand, Porto were the first of the top clubs in action, dispatching three goals past newcomers Arouca in a 3-0 victory at the Estádio do Dragão that initially seen them warm up first place.

The Lions were made to fight for a point after an unfortunate Nuno Mendes own-goal placed Famalicão a goal up, equalising only as late as the 82nd minute through João Palhinha to avoid defeat.

Elsewhere, Braga were unable to apply pressure on the likes of Porto and Sporting with a goalless draw of their own against Vitória in the Minho Derby, with the two foes remaining two points apart in the table.

The Estádio do Dragão readied itself for a response after Porto dropped their first set of points away to Marítimo, last weekend, eyeing all three against the newly-promoted Arouca.

Matheus Uribe held the key to the visitors' lock with the Dragons’ first goal in the 23rd minute, just ten minutes before Mehdi Taremi, with a sly finish going in at the near-post, sent Porto into the half-time break with a two-goal advantage.

Makeshift left-back Ivan Marcano got his name to Porto’s third goal of the evening in the second half, deflecting Pepe’s pull-back into the back of the net in the 63rd minute. Only one side looked like scoring throughout as Porto pressed on for a fourth, but three goals for three well-won points did the trick for the ‘Blue & Whites’ on their prompt return to winning ways.

Following on from Porto’s win, Sporting’s aim was to prolong their 100% win record gathered throughout these early stages of the season, lining up away to Famalicão. It was the home side that looked the likeliest to score first, however, as Antonio Adan made himself big on two separate occasions to deny Ivo Rodrigues in the first half.

Nuno Santos marked Sporting’s first real opportunity with a side-footed volley onto the post in the 58th minute before luck struck for Famalicão, roaring the ball goalwards after Ivo Rodrigues’ successful dispute versus Adan that was eventually hooked against Nuno Mendes, by Gonçalo Inácio, for a 68th minute own goal.

The Lions bounced back with Palhinha’s second goal in as many games in the 82nd minute, popping up at the back-post to steer home, but the goal didn't invite further joy for Ruben Amorim's men, as the two outfits shared the points come full-time.

After Sporting’s draw away to Famalicão, and with a Clássico between Porto and the Lions pending, the door opened up for Benfica to attain a firm grip of first place, as they welcomed Tondela to the Luz.

Salvador Agra ripped up the script with a well-taken shot across goal in the 22nd minute, beating Odisseas Vlachodimos and silencing the red half of Lisbon with Tondela’s opener.

Babacar Niasse proved to be a mountain to overcome between the sticks throughout the encounter before a glancing header from Julian Weigl finally set Rafa Silva for a back-post equaliser in the 71st minute, spurring the Eagles on for the winner.

The turnaround came, and from one of the unlikeliest of sources too, as Gilberto picked up the scraps from a João Mário cross to poke a shot in at the near-post, two minutes from the 90. Jorge Jesus’ men settled for the one-goal advantage, placing them two points ahead of rivals Porto, Sporting and an on-form Estoril.

In front of their home fans for the second time this season, Braga had a treat in the form of a tasty Minho Derby against Vitória to present, eyeing up a victory to push them closer to the top spots.

The visitors saw the perfect start flash right before their eyes after an inviting delivery from André Almeida fell to Oscar Estupiñan’s feet, just a mere few yards from goal before the striker sent the ball over in the 5th minute.

Braga replied with two dangerous efforts from range from André Horta, the first of which was only stopped by the post in the 24th minute.

The hosts continued to press for a winner right to the very end, where it almost materialised for Mário Gonzalez and the Arsenalistas, but this time it was the crossbar out to deny Carlos Carvalhal’s men, forced to settle for a draw.

What is happening to all the young Portuguese players from FC Porto and Benfica? It seems these players won't get a chance to play over average foreign players? Can someone explain.

As far as Benfica goes, you are correct.

As far as Benfica goes, you are correct.

Conceicao has finally been giving the Portuguese kids a chance. With Joao Mario especially, it's been paying off.

Bruno Costa has shown flashes in being very good, but I feel he could move into a higher gear.

JJ policy has always been like this, he hates Portuguese players. Ask Bernardo Silva, Andre Gomes, Gonzalo Guedes, Danilo Pereira, etc, etc. Its an endless line of Portuguese players who sat while inferior foreign players played. Honestly if named every player JJ has ignored here it would be about 35-50 players long.

Once they get a good to great player in the academy they hype him into orbit then sell him way too early and watch them fail but who cares, Benfica got their 100 millions right?

Don't lump Porto in with Benfica to try and make this look like a continental issue, its a BENFICA issue. Operation red card should tell you everything you need to know about how Benfica is run, Its huge news. This is what happens when a bunch of sycophants surround the president and the fans prop up idiots because "my team! my team baby!" you get what you deserve.

Thanks for the answers about Benfica, I didn't understand the dynamics at Benfica, it's really strange given the fact that at one point in Benfica's history they only played Portuguese players.

Ok Rodrigo, I think you need to decide what it is you're saying here, because we already discussed youth players.

Ok Rodrigo, I think you need to decide what it is you're saying here, because we already discussed youth players.

Last season, Porto regularly started and played (both in the Liga and Champions League):

So, sorry, but Porto, despite non-Portuguese policies of the past, has gone back to utilizing homegrown players regularly.