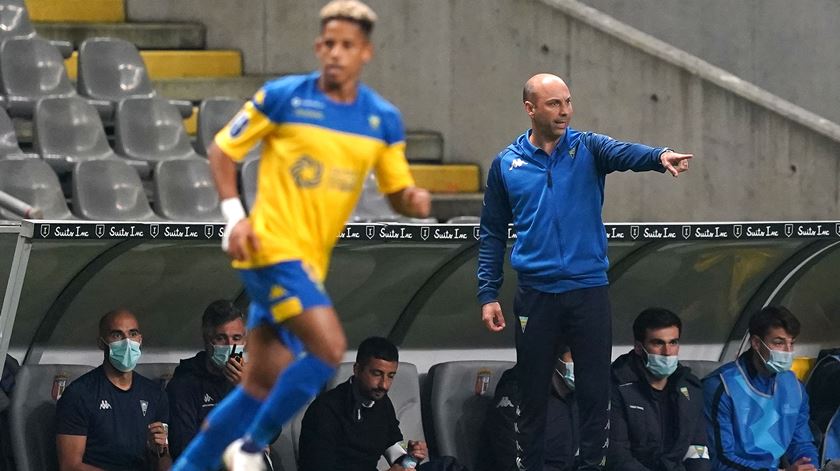 Liga Bwin’s opening gambit concluded for the season’s first international break this weekend with a number of closely fought, intense encounters. Benfica became the sole team with a 100% record, rising to the top of table after a late comeback win over Tondela, the Eagles taking advantage of defending champions Sporting slipping to a draw at Famalicão.

One of the surprise packages so far though continues to be Bruno Pinheiro’s Estoril, who carried on their unbeaten start by beating Marítimo. Their young manager is our PortuGOAL Figure of the Week after guiding his team to 4th place in Liga Bwin.

At only 44 years of age, Bruno Pinheiro is very much in the infancy of his coaching career and indeed his current stint at Estoril, where he was installed as boss in July 2020, is the first senior role of his fledgling foray into management.

He arrived in Estoril last summer tasked with bringing the club back to the top flight of Portuguese football after an absence of Primeira Liga action since being relegated from it back in 2018. As mentioned, despite working with Benfica and Belenenses’ youth teams previously his senior experience was completely lacking, entering into his post off the back of a spell as assistant manager of Belgian side Eupen. However, Pinheiro achieved the club’s number one target at the first time of asking as Estoril won Segunda Liga in 2020/21 at a canter.

Going into the new campaign ahead, keeping hold of his team’s stars from the successful promotion was just as important as improving the squad with proven Primeira Liga talent to help cope with the increased demands of the top tier, and thankfully for Estoril fans largely both of these objectives look to have been achieved. 24 year old midfielder Miguel Crespo, highly sought after thanks to his excellent season in the second tier was a significant name retained in the squad, while in terms of the latter point the likes of Francisco Geraldes, Lucas Áfrico and Nahuel Ferraresi are among the new recruits that have valuable experience at this level.

Since the beginning of the campaign Pinheiro has used a tried and tested 4-3-3 setup but has not been afraid to chop and change his personnel in the four games played, and to highly effective results thus far. Their season opener away at fellow promoted side Arouca yielded a 2-0 win, while a further clean sheet was achieved in holding Vitória Guimarães to follow. Most impressively, Estoril reached 7 points by beating Paços Ferreira the week after, a team that had finished 5th in the division last time out. This meant Pinheiro’s team went into Friday evening’s home match against Marítimo full of confidence.

The changes were rung in the XI once again by Pinheiro as he dropped midfield duo João Gamboa and André Franco, reintroducing Loreintz Rosier and Geraldes in their stead, the latter receiving his first starting berth for the club.

Estoril made a good start to the match at Estádio António Coimbra de Mota and it was full debutant Geraldes who came agonisingly close to opening the scoring in the 14th minute, his close range effort somehow kept out by the recovering Léo Andrade.

Pinheiro’s side continued to play attractive attacking football, and moments later Geraldes and winger Chiquinho combined well to set up striker André Clóvis, but the Brazilian’s effort was well blocked by the Marítimo defence.

An Estoril goal felt inevitable and so it arrived with almost half an hour played, albeit in fortuitous fashion. Crespo’s skill to set up the chance was anything but lucky, superbly nutmegging Iván Rossi before his deflected shot looped past the helpless Paulo Victor in the Marítimo goal.

Marítimo equalised against the run of play before the first half ended but Pinheiro’s side defended resolutely in the second period and re-took the lead just before the hour mark with a well-worked counter attack goal. Bruno Lourenço won possession back for his team and carried the ball forward before feeding the onrushing Chiquinho, who controlled and finished calmly past Victor to make it 2-1.

Estoril survived a couple of nervy moments thereafter to ultimately close out the victory, and earn their 10th point from a possible 12 at the start of what is proving a fine return to Primeira Liga.

Early days of course but Estoril’s young manager is worthy of plenty of praise for not only returning the club to a place at Portugal’s top tier but for the way in which he has the team performing on the pitch, unafraid of continuing an attacking, entertaining style despite the step up in quality they will face on a week to week basis. On current evidence they’ll be one of the sides to watch in Liga Bwin this season, and with it Pinheiro could be a coach with a very interesting future.