Champions League: Benfica blitz past Barça in week of disappointment for Porto and Sporting 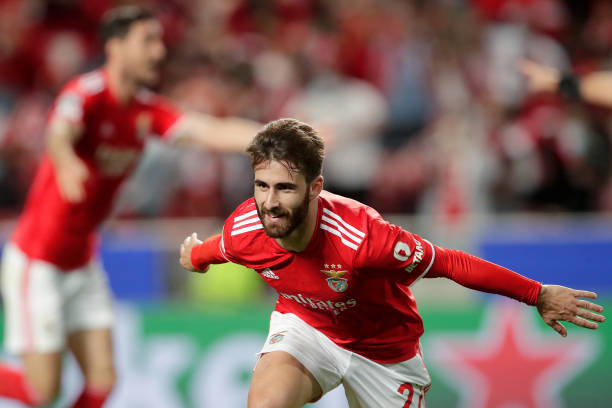 Benfica have returned to winning ways on the European stage with a historic 3-0 victory against Barcelona at the Estádio da Luz, tonight - their first against the Blaugrana outfit for 60 years.

An early goal from Darwin Nuñez put the pressure on a downbeat Barça, coached by ex-Benfica manager Ronald Koeman, before two further goals in the second half from Rafa Silva and the Uruguayan striker once more gave Jorge Jesus’ men their first UEFA Champions League win of the campaign.

Prior to the heroics in the Portuguese capital of Lisbon, FC Porto, much like Sporting before them, fell to a humiliating 5-1 defeat in their first home game of the competition as Jürgen Klopp’s Liverpool ran riot at the Estádio do Dragão.

Sporting could do no better, results-wise, although the defeat registered by the Lions was far more conservative this time around, with Donyell Malen marking the difference between the two sides in a 1-0 win for Borussia Dortmund. Here's how the 'Big Three' fared in Matchday 2 and the reaction by the respective coaches.

With ‘the Cules’ struggling for form in a turbulent start to the season, Benfica were keen to capitalise and allay some of their own criticisms on the European stage in a night full of hope and optimism, fueled by an early Darwin goal.

A second for the Lisbon giants, pounced on by Rafa, served as a killer blow to Barcelona in the 69th minute as the visitors braced themselves for a second consecutive defeat.

Darwin’s second goal of the night, via the penalty spot, placed the game beyond any doubt, taking Benfica up to second in the group with their first win over Barcelona since the famous European Cup final of 1961.

“Nobody thought we could beat Barcelona 3-0, but we, the team, believed we could win. Defensively we were faultless, really strong. Ody didn’t have a save to make apart from dealing with crosses. It was almost perfect. We also had some luck as in the last 15/20 minutes of the first half Barcelona were better than us, but we came out very strong in the second half.

“The team were superb both defending and attacking. Roman and Rafa, whenever we hit Barcelona on the counterattack, were really strong. Now we’ll think about Portimonense because our big goal is to win the Portuguese championship.”

In their first home outing in the Champions League, Porto were hoping to build on the draw attained away to Atlético Madrid against a potent Liverpool side. The night set itself up to be one to forget for the young Diogo Costa, however, looking like a sorry figure as the Reds raced to a 3-0 lead coming into the half-time break.

Mehdi Taremi pulled a goal back for the Dragons in the 74th minute before a quick-fire double from Roberto Firmino concluded a damning 5-1 defeat for the Portuguese outfit.

“We were not at all aggressive and made mistakes in crucial areas. We knew the strength and the verticality with which Liverpool attack, and we can’t make those mistakes. So many things were wrong and I’m the main person responsible. We must do much more and much better.

“Even the youth side, who today drew with Liverpool, would have done a better job than we did today. But it was me who didn’t get my message across, and I got the starting line-up wrong, for sure. I have to understand if the players are listening to the coach or not. Like this it’s going to be difficult to carry on and I’m talking about the domestic competitions.”

Sporting had a chance to make amends for their home upset against Ajax in their travels to Germany, but would have to overcome group-favourites Dortmund in order to do so.

The Lions put on a brave face against the Bundesliga side before Malen eventually broke the deadlock for the hosts in a clinical move in behind the Sporting backline, less than ten minutes before the break.

Rúben Amorim’s men were unable to avoid clocking up a second consecutive defeat, placing them bottom with Besiktas in the group, but the fresh-faced manager was quick to point to his youthful side’s inexperience on the European stage.

“We took more risks at the end, but after the abnormal result in the first round of matches, the team did well in this game. But we could have done better. We could have scored right at the start, we showed more capacity, but we lack weight in European competitions. We’ll improve in the future.

“Our fans have served as an example. They help us in every game, and they were here in great numbers. We want to show them we are a good team, more than the results, so that everyone can be proud of this team.”

Massive 3 points for SLB to help balance the sad, albeit expected letdowns coming from Portugal's CL representatives altogether. Barca still a formidable team this year. They outworked us for a good chunk of the match, it was difficult for...

Massive 3 points for SLB to help balance the sad, albeit expected letdowns coming from Portugal's CL representatives altogether. Barca still a formidable team this year. They outworked us for a good chunk of the match, it was difficult for Benfica to get a real grip on the ball but the defence proved excellent and our guys edged out a few battles to score when it mattered. A victory of this magnitude against one of the traditional super teams only happens so often.. almost like once every 10 years. So definitely worth savouring the moment. Well done Benfica!

The Benfica Barcelona result is a non event.
Nobody in the international media cares. The talk is only of Barcelona’s collapse, not about Benfica being any good. See how it goes against Bayern… I think it won’t go very well.

Well that was an outstanding performance and result from Benfica last night, to really give us a good chance of eventually progressing out of this tough group. JJ's tactics and game plan for the match were spot on, and 3-0 didn't flatter the team...

Well that was an outstanding performance and result from Benfica last night, to really give us a good chance of eventually progressing out of this tough group. JJ's tactics and game plan for the match were spot on, and 3-0 didn't flatter the team at all as there could have been even more goals: we should have another penalty in the first half (and a red card for Pique) and Darwin's (what a superb overall performance from the kid!) shot against the post in the second half was inches away from being another goal. Of course we have to keep in mind that this is not the same Barca of the last couple of decades, and is a club completely in transition at the moment, but I still have to say that they are not as weak all of a sudden as many people are making out. This was only their second defeat of the season so far, the other being against Bayern (no shame in that whatsoever!). And their central midfield is still excellent and will still dominate possession of the ball against virtually any team in Europe. Busquets and Pedri made up the core of the best (by far) central midfield at the Euros this summer. It was clear that they would dominate possession of the ball last night, but I think JJ's plan to deal with that worked very well. Where Barca are weaker these days is at the back and in attack, and we exposed that very well last night, with an excellent defensive display and by being ruthless with our attacks.

I'm really happy with our impressive start to the season so far. So much more balance in the team compared to the last few seasons. A big reason for this has been the influence of Joao Mario, who has been a great signing and has really improved our central midfield. He is such a calm and composed and tactically bright player, who influences the rest of the team with that tactical composure. The defense is also a lot stronger this season, part of that has been the switch to the 3 CB system, but also the fact that we have two absolute leaders in central defense, in Verissimo and Otamendi, who have both been outstanding so far this season. Jorge Jesus is a top coach, there is no doubt about that in my mind. Some of the regular posters on this site love to regularly slag him off....one even recently said that JJ's achievements in Europe have been ZERO (clearly reaching two consecutive major European finals with a Portuguese club = ZERO achievement, in some people's rationale, lol!!!). But in my opinion, once JJ gets his teams rolling and firing on all cylinders, he's the best Portuguese coach out there...at least for the kind of football I like to watch anyway: i.e. proactive, entertaining and highly offensive football.

Anyway Benfica and their fans have to keep their feet on the ground and just focus on one match at a time. It's been a great start to the season, but the season is still in it's infancy. We have made a good start to the CL group, but we have a heck of a lot of work to make it out of the group, with the next 3 fixtures being Bayern twice and then Barca away. Nevertheless, very encouraging signs last night, and for all of this start to the season so far, that we have the potential to have a very positive season ahead...