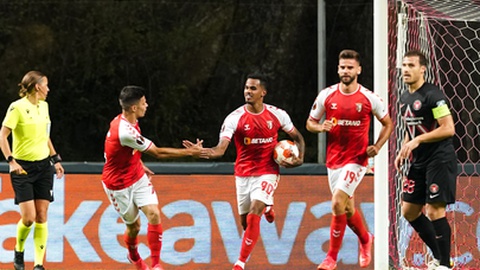 Braga shrugged off a disappointing first-half performance to score three times after the break and clock up a first win in this season’s Europa League. Two goals by the ever-impressive Wenderson Galeno and another by captain Ricardo Horta turned around the result after Braga had fallen behind to an Evander penalty.

Striker Mario González has still not scored for Braga since his summer move from Tondela, but it was the Spaniard who was the chief architect of the comeback, playing a major role in all three goals after coming on as a second-half substitute.

Carlos Carvalhal’s team have had a poor start to the season, winning just 3 of 9 matches in all competitions before last night’s clash. There was little sign of an upturn in fortunes in the opening 45 minutes. A clumsy challenge by Diogo Leite led to an early penalty for Midtjylland, with Brazilian Evander Ferreira calmly slotting past his compatriot Matheus Magalhães.

Badly lacking the fluidity that characterised their football last season, Braga found it difficult to get anything going in an attacking sense but were handed a golden opportunity to draw level when a quick breakaway led to a penalty of their own as Galeno was brought down by goalkeeper Olafsson. Ricardo Horta’s spot kick was too close to the ‘keeper however, who made the save.

Carvalhal made a double change at the interval, with González and Francisco Moura coming on for André Castro and Nuno Sequeira.

It was González who provided the spark that had been missing. First he won a penalty, which was smartly converted by Galeno, then he somewhat fortuitously provided a perfect assist for Horta in trying to control a Chiquinho shot. Finally González showed tremendous awareness to unselfishly lay on the third and clinching goal for Galeno from a well worked counterattack.

Despite the win, Braga were far from convincing for much of the match, with goalkeeper Matheus having to pull off a handful of sharp saves, especially in the second half, to keep the Danes from scoring more goals.

Nevertheless, the victory will no doubt boost Braga’s confidence, and another big positive was the return of the supremely talented Francisco Moura after a long injury absence due to a knee ligament rupture last season. Moura was inches away from scoring a goal that would have travelled the world given the skill involved and the audacity of the effort.

Moura’s near wonder goal shows that audacity and trying your luck, such as at tragamonedas chile, can bring rich rewards if the chips fall in your favour.

“My players were warriors, playing in the spirit that our fans are used to, with lots of belief, spirit of sacrifice and togetherness, against a tough team that attacked with lots of players. We knew how to take advantage of the way their team was unbalanced and it’s an entirely fair victory.”