Porto & Sporting close in on Benfica after shock Eagles defeat 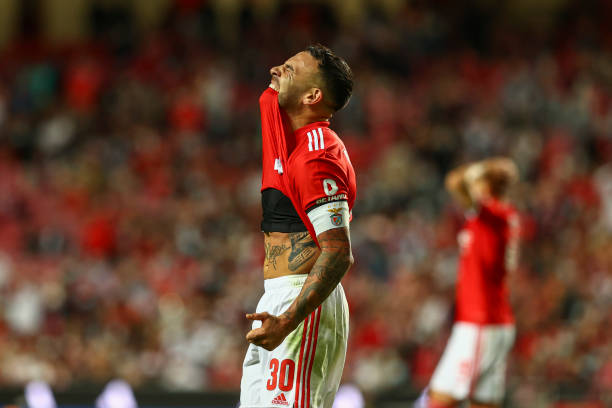 Benfica have seen their lead at the top of the Primeira Liga shrink to one point after picking up their first loss of the season in a 1-0 home defeat to Portimonense.

Prior to the match-up at the Estádio da Luz, ten-man FC Porto applied the pressure to the league leaders with a 2-1 comeback at home to Paços de Ferreira, moving the Dragons just a point behind their bitter rivals.

Sporting played the same move with a 2-1 victory of their own, away to newly-promoted Arouca, as Matheus Nunes and Nuno Santos gave Rúben Amorim’s side three hard-earned points.

After the horror-show that was Porto’s home encounter versus Liverpool in the UEFA Champions League, losing 5-1 in emphatic fashion, the Blue & Whites readied themselves for a timely reaction against Paços de Ferreira.

The alarm bells rang, however, when Nuno Santos placed the visitors a goal up in the 19th minute, taking advantage of Diogo Costa’s position to finish into an empty net.

Porto’s man of the moment, Luis Díaz, was there to drag the title challengers back level on the brink of half-time, following up inside the area to finish the scraps left from a Mehdi Taremi cross.

Evanilson almost completed the turnaround 6 minutes into the second half with a header against the top of the bar before his compatriot, Wendell, no more than a minute later, grabbed his first goal in Porto colours with a volley inside the area.

At the other end, Nuno Santos made the home crowd hide behind their hands once more as a whipped cross almost found its way in before slamming against the post in the 56th minute. Porto managed to put a lid on things, however, but the would see out a 2-1 victory reduced to ten men, following Taremi’s sending off for diving.

A second consecutive defeat in Europe meant Sporting were tasked with licking their wounds away to Arouca, despite making a number of changes to their backline. The night started off well for the Lions, with Matheus Nunes, fresh from a call-up to the Portugal national team, placing Sporting 1-0 up as early as the 15th minute.

Bad news came in the 51st minute when Oday Dabbagh, at the right place and at the right time, equalised for Arouca with a close-range volley.

But Amorim and his men wouldn’t have to worry for too long, reclaiming the lead three minutes later via a powerful Nuno Santos strike, sealing an important 2-1 victory for Sporting away from home.

As sky-high as an Eagle can be after their 3-0 demolition job versus Barcelona, Benfica were out to do it all again at the Estádio da Luz as Portimonense visited the Portuguese capital.

But what we witnessed was yet another illustration that luck and unpredictability, just like when playing tragamonedas chile, plays a huge part in football.

The table-toppers looked to be in the mood for it too, as both Roman Yaremchuk and Darwin Nuñez came close in the first half before Rafa Silva saw a one-on-one chance go begging following a big Samuel stop.

As the busy Portimonense’ goalkeeper continued to star, the visitors managed to make Benfica pay for their inaccuracy in front of goal, finding themselves a goal up via Possignolo’s glancing header, squeezing under the legs of Odisseas Vlachodimos in the 66th minute.

Jesus’ outfit continued to search for a goal without fortune, as Nicolás Otamendi pushed his team closer in times of tension, but Portimonense were ultimately able to hold onto three crucial points, narrowing the picture at the top of the table for Benfica.

This is why football is such a surprise and nothing can be guaranteed, Benfica beating Barcelona comfortably 3-0 and then proceed to lose at home?

Well Jesus did say they defended better than Barcelona,...

This is why football is such a surprise and nothing can be guaranteed, Benfica beating Barcelona comfortably 3-0 and then proceed to lose at home?

Well Jesus did say they defended better than Barcelona, but boy did Benfica miss a handful of chances, it was just one of those games that Benfica playing for another 3 hours wouldn't score and most likely end up conceding more. In all fairness their goal came from a corner which is the only way these kind of teams win against the bigger boys.

That being said, I ain't complaining, its made things interesting again, Benfica for now are losing more points unexpectedly against smaller sides than Sporting and Porto, as they have faced each other already.

Porto with a decent result and good response after Sergio got schooled by Jurgen das German. Wish Sergio would actually try new formations and tactics but after 5 years, he ain't changing squat.

Benfica threw everything but the kitchen sink,...

Porto with a decent result and good response after Sergio got schooled by Jurgen das German. Wish Sergio would actually try new formations and tactics but after 5 years, he ain't changing squat.

Benfica threw everything but the kitchen sink, but Samuel Portugal was on his A game. That was the best GK performance I've seen in years.