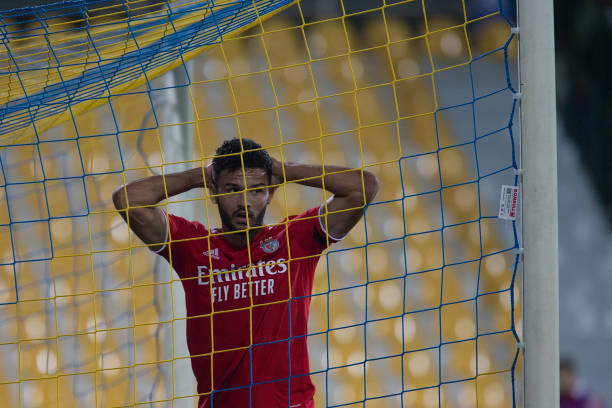 Benfica have been leapfrogged at the top of the Primeira Liga table after surrendering a lead late on to draw 1-1 away to Estoril Praia, this Saturday.

The Eagles, under pressure following a comprehensive 4-1 victory from FC Porto in the Invicta Derby, were in front as early as the second minute via Lucas Veríssimo’s opener, but a 90th minute Loreintz Rosier equaliser scuppered a positive night for Jorge Jesus’ men, now one point behind first and second place.

Sporting followed Porto to the top with a 1-0 win at home to Vitória de Guimarães, supplied by the trusted goal-scoring source that is Sebastian Coates, setting the Lions side-by-side with the Dragons on 26 points.

A source of high emotions throughout the last campaign, Boavista were hoping to get on the right side of the occasion once more in order to fuel their thus far steady start to the season, meanwhile Porto sniffed for three points.

Luis Díaz placed Sérgio Conceição’s men a goal up in the 20th minute but the stalemate was reinstated soon after by a Yanis Hamache pile-driver ten minutes later, equalising for the ‘Black Panthers’.

Porto we’re back in front before the first half was out, increasing their new-found advantage to 3-1 coming into the second period after Evanilson crowned two well-timed runs in behind the Boavista defence with one-on-one finishes.

There was a debut goal for former Reading youngster Danny Loader in the dying embers of the game, breaking his duck in Portugal with a close-range heel-flick to secure a 4-1 win.

Lining up against the ‘best of the rest’ Estoril, sitting pretty in fourth place, Benfica were tasked with keeping ahold of top spot, away from home, in the knowledge that only a win would suffice.

Lucas Veríssimo set the Lisbon giants up for just that in second minute of the game, nodding in from a set-piece as Benfica totted up the shots on target, without much danger, throughout the remainder of the first half.

The second period followed a similar trend, with Benfica taking aim at Estoril’s goal without success in their search for a second. In the 90th minute, Rosier proved just how precious that second goal would’ve been after attacking the near-post and equalising before stoppage time, snatching a point for Estoril.

In a big test for the current Primeira Liga title holders, a victory for Sporting against Vitória would place the Lions closer to a position of power, joint-top with rivals Porto after Benfica’s slip up.

The visitors looked dangerously close to taking the lead after a strike from Tomas Händel incurred a wave of rebounds which Antonio Adán and co. would manage to weather in the 12th minute.

Having already seen a goal cancelled out for offside, the Alvalade was left jumping indefinitely in the 31st minute after Coates arrived on time for Paulinho’s flick-on from a corner to head in the opener.

Sporting came very close to making it 2-0 on a couple of occasions through Matheus Nunes and Paulinho, meanwhile Vitória lived in search of an equaliser deep into the encounter, but a sole goal from Coates separated both sides at full time.